Orange Swirl, or Dizzy Twister, is a female Pegasus pony with a light khaki coat, a pink mane and tail with a light pink streak, fuchsia rose eyes, and a cutie mark of three tornadoes. She is unnamed in the show, but she is named in merchandise. She is identical to Sugar Twist apart from her mane colors, and shares her design with Rainbowshine. She has speaking roles in Lesson Zero and in Rainbow Falls.

Orange Swirl is commonly featured in Ponyville and Cloudsdale as a background pony. She makes her first appearance in Friendship is Magic, part 1 in the town hall, awaiting the start of the Summer Sun Celebration.

She participates in the Running of the Leaves in Fall Weather Friends as contestant #1 and is visibly worn out by the end. The camera cuts to her and two fellow panting contestants as Twilight Sparkle explains her running strategy to Applejack and Rainbow Dash. In Feeling Pinkie Keen, Orange Swirl, along with Merry May, pulls the trailer that drops a myriad of objects on Twilight. In Lesson Zero, she answers Mayor Mare's question about what the Cutie Mark Crusaders and Big McIntosh are fighting about, and proceeds to fly towards the commotion with a wide grin on her face. Later in the episode, she attempts to grab Twilight's doll from Sassaflash; their fight causes the doll to fall to the ground near Rainbow Dash, which precipitates Twilight explaining her actions to her friends. In Hurricane Fluttershy, she is one of the ponies causing the first tornado's collapse; exhausted, she strays from her position and crashes into another pony, which causes a chain reaction. In The Crystal Empire - Part 1, she is among the ponies at the Crystal Faire when Rainbow Dash flies back to the Crystal Empire castle with the flag. In Wonderbolts Academy, she appears as a lead pony, then later as a wingpony.

Orange Swirl also appears in the season four premiere and Flight to the Finish.

In Rainbow Falls, she participates on a relay team with Rainbowshine and Rainbow Swoop, and they qualify at the end of the trials.

In Tanks for the Memories, Orange Swirl appears among other Pegasi moving clouds in preparation for winter. She also appears in Ponyville in Make New Friends but Keep Discord, on the Friendship Express train in The Lost Treasure of Griffonstone, at Cranky Doodle Donkey and Matilda's wedding in Slice of Life, at Canterlot Castle in Princess Spike, in Party Pooped, in Ponyville's shared dream in Do Princesses Dream of Magic Sheep?, and at the Sisterhooves Social in Brotherhooves Social.

In A Hearth's Warming Tail, Orange Swirl appears during Hearth's Warming Eve Is Here Once Again. In The Cart Before the Ponies, she appears doing the wave during Derby Racers. She also appears in the crowd of fanponies at the train station and as the scorekeeper in Buckball Season, at Gabby's cute-ceañera in The Fault in Our Cutie Marks, and in the operating theater in Where the Apple Lies.

In season seven, Orange Swirl appears in the crowd for the Couture du Future Fashion Contest in Honest Apple, as part of the angry mob in Fame and Misfortune, admiring the giant fan in Mr. Breezy's store in It Isn't the Mane Thing About You, and at Pinkie Pie's pie party in Secrets and Pies.

In season nine, Orange Swirl very briefly appears next to Rainbowshine in Canterlot in The Beginning of the End - Part 1.

At Rarity's fashion show in Suited For Success, a variant of her with light blue hair stands in the audience. A pony with her exact design, but with dark blue eyes, appears briefly at the start of the Running of the Leaves in Fall Weather Friends. This same variant competes in the Best Young Flyer competition as Contestant #1 in Sonic Rainboom. In The Super Speedy Cider Squeezy 6000, she appears variously with and without wings, and with and without her three-tornadoes cutie mark; in one shot, her cutie mark is what appears to be a toaster. She also appears without wings or a cutie mark in The Crystal Empire - Part 2, watching the Crystal Faire jousting match between Rainbow Dash and Fluttershy at the Crystal Empire. During Wonderbolts Academy, her cutie mark is three raindrops (the same as that of Sunshower Raindrops) while operating one of the machines at the air obstacle course in one shot. In Apple Family Reunion, she appears without wings or a cutie mark in the crowd at the beginning of the song Raise This Barn.

Orange Swirl appears in My Little Pony Equestria Girls: Forgotten Friendship flying outside of the Canterlot castle. She also appears in the second establishing shot of Canterlot talking to Merry May.

In My Little Pony: Friendship is Magic Issue #47, Orange Swirl appears on pages 2 and 20.

In the Enterplay collectible card game's expansion set Canterlot Nights, Orange Swirl is named on her own card #15 C, which gives her the description "Orange Swirl once beat Sugar Twist's record for biggest tornado on Ponyville school grounds. Spending the following week clapping erasers after school was totally worth it."

On at least​[​specify​]​ the DVD Season Four Disc 2, closed captions for the episode Rainbow Falls refer to Orange Swirl by the fan-given name "Dizzy Twister".

"They're fighting over that doll!"
— Lesson Zero

"I heard that she's flying the last third of the relay, which means everypony else is gonna have to be way ahead to beat her!"
— Rainbow Falls

"Then Cloudsdale will definitely qualify. They're the best flyers ever!"
— Rainbow Falls 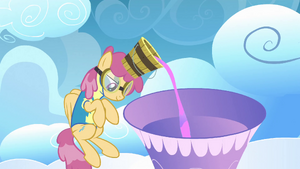