Over a Barrel is the twenty-first episode of the first season of My Little Pony Friendship is Magic. The idiom "over a barrel" means being in a helpless position where others are in control.

In this episode, the Mane Six and Spike separate and are caught in a dispute between a western town's settler-ponies and the native buffalo herd.

The crew worked with a Native Consultant and did revisions to the episode according to his notes.[1]

The scene when Applejack reads to Bloomberg reappears in Harvesting Memories.

A train ride to Appleloosa

The episode begins with Twilight Sparkle and her friends on a train to the recently-built western town of Appleloosa, where Applejack plans to replant one of her trees - named Bloomberg - in her relatives' orchard. Everyone is looking forward to Appleloosa, but during the journey, Spike and Rarity show varying amounts of discomfort: Rarity doesn't like the fact that Applejack's tree was placed in a private cart in the rear, forcing her to bunk with her friends, and Spike is tired from cooking snacks with his fire breath.

When Rainbow Dash complains that not all of her popcorn kernels were popped, Spike burns her popcorn black and goes to bed. Rainbow Dash asks Pinkie Pie if they're going to carry the tree all the way to the apple orchard. Pinkie Pie, wondering if she refers to Bloomberg, is met with a sarcastic response from Rainbow Dash saying they would actually be carrying Fluttershy. Failing to get the joke, Pinkie tells Rainbow Dash that Fluttershy is not a tree. This leads to a rather confusing conversation with Twilight, but in the end, Fluttershy is awake as well, saying that she would like to be a tree. Spike, frustrated with his inability to fall asleep, makes his way to the private cart to bunk with Bloomberg. Fluttershy jokingly calls Spike "Huffy the magic dragon," and the four friends laugh. Rarity, frustrated herself, demands they be quiet, and all of them go to sleep.

The next morning, the ponies are awoken by a herd of stampeding buffalo charging next to the train. The buffalo start ramming into the side of the train in an ambush attack. Due to lack of sleep the previous night, Spike sleeps through the attack. A younger, leaner buffalo leaps onto the train and, after outmaneuvering Rainbow Dash, disconnects the caboose from the other train cars. The buffalo then push the disconnected caboose down the line in the opposite direction, with Bloomberg and Spike still inside.

Upon arriving at Appleloosa, Applejack rushes out to tell her cousin Braeburn, who had been waiting excitedly at the station for their arrival, that they have a problem. Unfortunately, Braeburn insists on giving his cousin and her friends a tour around the new town. Finally, after going as far as showing the group the new apple orchard, Applejack finally gets Braeburn's attention. She tells him what had happened to the train before their arrival, and Braeburn sadly says that he's aware of the whole situation, stating that the buffalo are demanding for them to remove the trees, but they argue that they can't, otherwise the town wouldn't be able to survive in the desert.

Coincidentally, Pinkie has the same idea as Rainbow Dash to find and rescue Spike by getting to the buffalo herd, but the herd manages to get to them first. Just before a fight breaks out, Spike arrives and breaks it up, using his new respect that he has somehow earned from the buffalo.

Pinkie and Rainbow Dash are brought to the buffalo tribe's camp, where Dash meets the young female buffalo Little Strongheart again, and are told that because Appleloosan townsponies have planted the orchard, they can no longer travel along their traditional stampeding grounds. She explains that the theft of Bloomberg was to send a message. Chief Thunderhooves then arrives, confirms Little Strongheart's explanation, and says that the land the Appleloosans now inhabit was stampeded upon by many generations of buffalo. Rainbow Dash feels sympathetic toward the herd of buffalo, and makes sure to talk to the townsponies about it.

Pinkie Pie tries to send out a message about sharing by putting on a quick song-and-dance number, as both Appleloosans and buffalo watch. Pinkie tries to encourage them to share by singing about the similarities between the ponies and buffalo.

"You gotta sha-a-are! You gotta ca-a-are! It's the right thing to do, and there'll always be a way thro-o-o-o-ugh!"
— Pinkie Pie

Unfortunately, Thunderhooves and the town's sheriff Silverstar are not impressed. The only thing they could agree on is that Pinkie's performance was the worst they had ever seen. After declaring a time for action, the buffalo chief gives a clear ultimatum: the townsfolk must uproot all of the trees by high noon the next day, or the herd will be forced to destroy them, along with Appleloosa in the process. Silverstar, in response, simply states that the town will be waiting for them.

Appleloosans vs. the buffalo herd

Twilight and the others try to talk both the Appleloosans and the buffalo out of the fight, but no one is listening. High noon the next day finally arrives, and the buffalo appear on a ridge overlooking the town. Strongheart softly gestures to the chief to back down, and it almost works, until Pinkie Pie appears, singing a reprise of her number from the day before in a last-ditch, last-minute, and horrendously ill-timed effort to stop the fight before it even begins. Thunderhooves, now enraged, signals the buffalo to go on the attack, using nothing more or less than their own brute strength. The townsponies fight back against the buffalo with an ample supply of apple pies, which are surprisingly effective at confusing and stopping the stampeding buffalo. Both groups manage to take out some of their opposition, also damaging the town in the process. The scene shifts to Silverstar making a final stand next to his saloon, and once he runs out of apple pies to throw, he takes off his hat in quiet submission, as Thunderhooves makes a mad charge at him. However, a stray apple pie hits Thunderhooves square in the face, disabling him. Lying on the ground momentarily, Thunderhooves licks the apple pie off of his face, and enthralled by its delicious taste, says they could come to an agreement.

The Appleloosan ponies are allowed to keep the land, and in return, the Appleloosans would share its fruit (or more specifically, its apple pies) with the buffalo herd during their stampeding. The townsponies, meanwhile, create a road through the orchard so the herd can continue their stampeding tradition. Both parties find this to be agreeable and the dispute has come to an end. In addition, Applejack is finally able to plant Bloomberg.

Twilight learns that with compromise and understanding, to share and to care, sometimes the worst of enemies can become the best of friends.

Rarity: Applejack! Were you reading a bedtime story to... an apple tree?!

Rarity: Hmph! You talk about it as if it's your baby or something.
Applejack: Who you calling a baby?! Bloomberg's no baby! Don't wet widdle Rarity make you all saddy-waddy. Bloomberg's a big and strong apple tree. Yes, he is. A-coochie-coochie-coo-coo-coo!
Rarity: It's widdle Rarity who's all 'saddy-waddy'! Urgh! 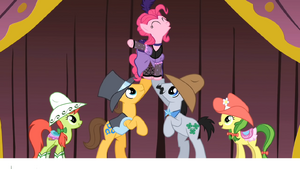 Over a Barrel image gallery