Main category: Over a Barrel images

Those are some STRONG ponies to pull a train all day and all night...

Applejack is found telling a bedtime story to... an apple tree?

"Were you reading a bedtime story to..."

Bloomberg being tucked in by Mama AJ.

Rarity is not amused.

Rarity is not amused, while Applejack searches up for an excuse.

She loves Bloomberg, oh yes, she does.

"You've got a luxurious, private sleeper car for a tree, while I am crowded and cramped in the same car with all the other ponies."

"How am I supposed to get my beauty sleep?"

"Who you calling a baby?! Bloomberg's no baby!"

You missed a few.

And a silly Pie to boot!

Note to self: Never use sarcasm in front of Pinkie Pie.

Well, that was a loud slam.

"Sorry, I tend to snore a bit. Goodnight."

Cuddly tree.
Add a photo to this gallery

A wild stampede of buffalo appear.

"I just love their accessories."

Twilight can sense there's something wrong.

Am I seeing this?

Whoa there, you're awfully close to the train.

Spike must be a deep sleeper.

Pinkie, thinks it's a circus act.

Almost got to the car.

Now that is a ride!

Hey! Where you off to?

...You're fast for someone your size.

I just passed you, you mad?

Well at least it is not a mountain.

You can whistle with hooves?

Running away with the train car along with Spike and Bloomberg.

Ow.
Add a photo to this gallery

Applejack, Rarity and Twilight rushing out of the train.

One happy colt from Appleloosa in their faces!

Applejack, unsure of what to say about her happy cousin.

You mind introducing your fellow friends?

In the best country in Equestria!

Pan out view of Appleloosa.

The town of Appleloosa

Its a rough start

A cute shot of Applejack and Twilight.

You've got to listen Braeburn.

A pony getting thrown out of the Salt Block.

"Over there's the office of Sheriff Silverstar."

"And here's where we have our wild west dances!"

Not the element of patience.

"I am trying my best not to freak out!"

"Did you say buffalo?"

"Them buffalo, they want us settler ponies to take every single tree you see here off this land. They sure as hay don't want any new ones added in."

Braeburn worried for the future of the town.

Pinkie, I have no time for this.

"Shhshh! What do you think you're doing?!"

"You gotta get out of here!"

"You're gonna blow my cover!"

"I'm trying to save Spike!"

So, they're fond of dragons.

Sitting by the fire.

"I say we turn tail and bail while we still-"

"Before we finish EATING?"

"Are you loco in the coco?"

"Can I please have more of that mushy stuff, whatever it was?"

Pinkie Pie, with mushy food in her mane and on her face.

I think they get it.

Rainbow Dash, anything but happy.

A close up of Chief Thunderhooves.

Applejack is anticipating a long trek into buffalo territory.

Eh, sorry about before?

..That would be useful.

I got a great idea.
Add a photo to this gallery

This better be good.

Pinkie is ready to show us.

All set to go!

And so, the song begins.

Spike can play the piano... huh.

Pinkie is about to make her entrance

How are we seeing this?

Pinkie has her helpers to help with her musical number

Being lowered, so she can continue on

Hopping along the stage.

I'm sure this song will work.

Pinkie Pie pops out of the piano, because she can

Nopony is quite as happy as Pinkie

Dancing in the piano

Hee hee, this is fun.

I hope all of you are enjoying the show.

She likes to dance and sing.

Giving each other glances.

A closeup shot of Pinkie dancing

A very cute shot of a happy singing Pinkie.

Hey, this is another way in which the ponies and buffalo of Appleloosa can agree: they both think Pinkie is completely nuts.

Wait, when did Pinkie convince that crowd to dance in her musical number?

She loves to sing.

About to finish up.

Pinkie finishes up the song

Spike cheers for Pinkie (he's the only one to do so)

Pinkie takes a bow, for a performance "well-done" (or so she thinks)

It appears that Sheriff Silverstar and I have come to an agreement.

Pinkie and Spike get their hopes up.

That was the worst performance we've ever seen.

That wasn't the message of my song at all.
Add a photo to this gallery

Guess no Appleloosan wants to listen to them.

The Appleloosans gear up for battle.

Why won't anybody be rational and reasonable?! (Wait, did Twilight just say "Anybody?")

The ponies, waiting for the battle.

I know you're upset Spike, but here are some gems.

I know you're better than this.

The buffalo, ready to attack.

Appleloosans watching in fear at the Buffalo Horde...

Prepared for the deadliest food fight

The time is getting closer.

It's High Noon for Appleloosa

For a moment, they think that Chief Thunderhooves has decided to not attack.

Suddenly, in a singer's costume, a pony named Pinkie started singing and dancing...

Because you can't roller skate in a buffalo herd

KA-BOOM! No buffalo can hurt Pinkie that easily.

"Our Pies Will Block Out The Sun!" 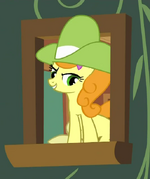 You don't mess with Golden Harvest

She jumps out the window landing on a charging Buffalo

Get them, Golden Harvest.

And rides that buffalo into battle

Looking up at the collapsing clock tower

I'm not going down without a fight.

Running up to the Sheriff.

The end for Chief Thunderhooves?

The pie goes into his mouth.

I've got a much better idea!
Add a photo to this gallery

The ponies clear a path for the buffalo.

Passing pie, to the buffalo.

I'd rather eat turquoise any day of the week.

Bloomberg, this is your special day.

An agreement at last.

....and the beginning of a new friendship.

Pinkie breaks the fourth wall for the last time in season 1.
Add a photo to this gallery
Retrieved from "https://mlp.fandom.com/wiki/Over_a_Barrel/Gallery?oldid=2177581"
Community content is available under CC-BY-SA unless otherwise noted.