In this episode, Twilight Sparkle befriends an owl who becomes her second personal assistant, to the displeasure of Spike.

Episode writer Cindy Morrow stated that the working title for the episode was Hoo Goes There.[2]

Prologue: the number one assistant

The episode opens at the Golden Oak Library with Twilight Sparkle and Spike preparing for a picnic for the centennial meteor shower. They gather stargazing equipment and pack snacks. Twilight compliments Spike for being such a reliable assistant; the compliment pleases him so much, he gets her to say it twice more. On the way out, Twilight remembers that she owns a relevant book on astronomy and asks Spike to fetch it. When he picks it up, the dust makes him sneeze fire, accidentally burning the book pages. He hides the book to avoid telling Twilight about it and lies instead, saying that someone might have borrowed it.

Twilight believes him and they, along with their friends, set up a picnic on a hill under a starry sky. Rarity gives Spike a bow tie laden with jewels. The ponies enjoy the meteor shower and the food, but Spike falls asleep in the punch bowl.

Twilight Sparkle tucks Spike into bed and starts writing her findings on the meteor shower. Hearing a tap on the balcony door, she looks but finds no one there. She is interrupted by another noise and a shadow that flies past the window. She opens the window to investigate, but a gust of wind blows her report out of another window. While she bemoans the fact that it would normally be Spike's task to retrieve the scroll, an owl comes in through the window, hoots at her, and drops the scroll onto her table. Twilight thanks the owl and invites it to keep her company while she works.

The next morning, Spike wakes up in a panic, immediately noticing that he overslept. He rushes down to apologize to Twilight and make up for lost time, but she informs him that everything has already been taken care of by their "new junior assistant," Owlowiscious. Spike tries to befriend Owlowiscious, but the latter only says, "Hoo." Spike suspects that this new assistant is "after [his] job," and warns the owl that he will be keeping a close eye on it.

Later that day while reading a book about owls, Spike overhears a conversation of Twilight's friends outside the library. Fluttershy is fascinated by the bird, and much to Spike's dismay, Rarity gives Owlowiscious another one of her bejeweled bow ties. Seeing him take off in a huff, Rainbow Dash and Fluttershy suspect Spike feels jealous, or even threatened, of the newcomer. Later, Spike tries to assist Twilight as usual, but Owlowiscious is always one step ahead of him. In one case, Spike asks around all over Ponyville to find a new quill pen, before finally managing to take a feather from a chicken. When he returns, he sees that Twilight already has a new quill: one of Owlowiscious' feathers. In a huff, Spike announces he will now do all the chores the owl hasn't finished yet, but falls asleep in exhaustion almost immediately.

He is woken up in the next scene: Owlowiscious has found the charred astronomy book, and Twilight is very upset that Spike lied to her. He storms out of the library, proclaiming that he intends to get even with the bird.

While outside, he sees a mouse scurry away and remembers that owls eat mice. He leaves the scene, only to return in a villainous disguise. He sneaks into Rarity's boutique, takes Opalescence's toy mouse, and ventures back into the library, where he intends to make a mess using the now-destroyed toy, pillow feathers, and ketchup, hoping that the owl would get blamed. But before he can finish, Twilight catches him in the act. Twilight says once more how disappointed she is and how "this is NOT the Spike I know and love." Spike then runs away to the Everfree Forest with a bindle over his shoulder.

Hungry, cold, and wet from a sudden rainstorm, Spike finds shelter inside a nearby cave, where he first discovers a trove of gems and then the apparent owner of these gems: a giant green dragon who is upset that Spike has been eating some of the jewels. Spike tries to reason with the dragon, citing their relation in species, but the dragon is not placated and attacks. Just as he is being cornered, Owlowiscious and Twilight arrive. With the owl's guidance, they rescue Spike and distract and outmaneuver the adult dragon before escaping into the forest. Twilight later explains that she was very worried when he disappeared, and that they followed the tracks Spike's ketchup-covered feet made.

Twilight assures him that she only spent her time with Owlowiscious because he was awake during the night-time and because Spike is still too young to stay up late. Spike apologizes to the two for being so jealous, and Twilight apologizes in return for not being sensitive enough to Spike's feelings.

Back at the library, rather than write her usual report, Twilight convinces Spike that he should do it. He starts to do so, but falls asleep before he can finish the report. Owlowiscious hoots, which Twilight initially mistakes for a question, and in the final shot, the owl turns its head 180 degrees and winks at the camera.

Pinkie Pie: Mmm. Wow! These cookies are deeleesh!
Twilight Sparkle: Spike made them. Speaking of, Spike, can you bring us some punch? Spike?
Spike: [snore]
Twilight Sparkle: [commenting on Spike sleeping in a punch bowl] Aww, he's worked himself to the bone.
Pinkie Pie: And now the punch has been... Spiked!

Spike: But the store is called "Quills and Sofas"! You only sell two things!
Davenport: Sorry, junior. All outta quills until Monday... Need a sofa?

Spike: You set me up! Well, two can play that game!
Owlowiscious: Hoo?
Spike: Not who! TWO!

Spike: Owlowiscious is out to take my place, I just know it! I've gotta stop him. But how? [mouse squeaking] Ah... Muahahaha!

Dragon: (To Spike) What are you doing in MY cave, and why are you eating MY gems?

Twilight Sparkle: [catches her breath] Spike. We were so worried about you. I was so worried about you. Why did you run away?
Spike: I thought you didn't need me anymore. And that you didn't love me anymore.
Twilight Sparkle: Spike. Sure, I was disappointed, but you are my number one assistant! And friend. And you always will be. It's just that sometimes I need some help at night. I can't ask you to stay up late. You're a baby dragon and you need your rest. Owls are nocturnal. So I asked Owlowiscious to help. But not to take your place. No one could ever replace you, Spike. Not even when you are being a jealous numbskull. 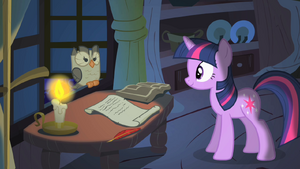