This telescope is beautiful.

Tonight will be exciting!

Is that a dragon or a monkey?

Toss it into the wagon.

"Y'know, this meteor shower comes every one hundred years!"

Apple train on my tail!

Who has the greatest faith in her number one assistant?

I almost forgot to brush my teeth!

Oh you know, that book that has those sparkly thingy.

Spike knows where the book is.

Best to put it where it belongs...

The ponies getting ready to watch the meteor shower.

Yes, the book was not there.. No one burned it.

Because you're already so smart and stuff.

I wish I had such a rad assistant

I'll do whatever you want Rainbow Dash!

Why don't you take out the trash?

I guess she did mean it.

Spike has done a great job and thus he is...

Isn't he the cutest little dragon ever awww!

If it doesn't look good now, if you put more shinies on it, it'll look better, I promise.

Hey everypony! The shower's about to start!

The ponies all watching the meteor shower.

Watching the shower in awe

The ponies watching the meteor shower.

"He worked himself to the bone."

Spike got too tired from all the work.
Add a photo to this gallery

You left that open, Twilight.

Checking into the night.

The note flies away.

Hoo's shadow could that be?

Trotting in one spot is actually cute.

An owl perched by the window with Twilight's letter.

D'aww, look at him, sleeping.

It's just another Manic Monday...

What happens when the arms past 12?

Spike, what is wrong with you in a beautiful morning like this.

Are there any chores?

Spike after hearing about Owlowiscious

And... Wait, what the heck is that thing? It's staring at me MAKE IT STOP STARING AT ME

I don't need help, I'm better on my own!

Two can play at this game!

Look owl! I'm Twilight's only assistant, got it!

I got eyes on the back of my head too, you know!

Off to get Twilight back on my side!

Spike needs all the info he needs about owls

You have to admit, Owlowiscious is rather cute

Spike leaves in a huff.

"Maybe Spike feels threatened or worried that Owlowiscious will replace him?"

I am not impressed or the slightest happy.

Looking for a quill

Spike, at your service!

Well, that was tough luck.

Not what I was looking for.

What else is in here.

He is one determined little dragon.

Wait a minute, since when do owl's take baths?

Yeah right, Spike, Like a chicken feather is gonna do nicely.

Spike returns after a long day.

Asleep on the stairs.
Add a photo to this gallery

Woken up by a sudden thumping of a book.

Twilight is disappointed and angry.

You set me up!

Looks to the side to see if anypony is coming. 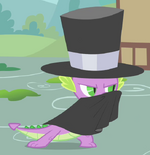 Rarity and Opal, walking to Fluttershy's.

Opal, will never know its missing..

Spike is about to frame Owlowiscious for murder.

Behold a bottle of ketchup

Twilight's there, isn't she?

He needs to be punished, right?

Spike thinks that Twilight doesn't love him anymore.
Add a photo to this gallery

Spike's not the only one obsessed with diamonds.

That's an awful lot of gems for such a small dragon... oh wait

Look dude, I didn't mean to cause any trouble.

Running might be a good idea right about now...

You don't scare me!

Run Spike, run for your life!

I see a great escape.

Ow Spike, that's my back!

The dragon in motion.

A heartwarming conversation between Twilight and Spike.

I'm sorry Twilight I never should've been so jealous.

Um, no, the ketchup did not look real, Spike.

About to write a great letter

Twilight, you have the loveliest giggle in all of Ponyville!

Owlowiscious winks
Add a photo to this gallery
Retrieved from "https://mlp.fandom.com/wiki/Owl%27s_Well_That_Ends_Well/Gallery?oldid=2177512"
Community content is available under CC-BY-SA unless otherwise noted.