/aʊləˈwɪʃəs/ ow-luh-WISH-us) is an owl who first appears in the season one episode Owl's Well That Ends Well and is adopted by Twilight Sparkle as her pet. He initially raises Spike's suspicions but eventually helps Twilight in rescuing Spike from another dragon. He appears again in multiple episodes throughout the series.

After the owl's first appearance on the show, Lauren Faust clarified on her DeviantArt page comment section that his name is spelled "Owlowiscious", though "it probably should have been Owloysius",[5] which is closer to the real name "Aloysius". On Twitter, Jayson Thiessen used "Owlowiscious" in November 2011[6] and Cathy Weseluck used "Owlicious" in June 2012.[7] The spelling "Owloysius" is used in the tags and description of a clip from Owl's Well That Ends Well uploaded by Hasbro's mylittlepony YouTube channel in September 2011[8] and in a question posted by Hasbro's My Little Pony Facebook page in February 2012.[9] In the 2012 trading cards, the owl's own card uses "Owlowiscious" and lists it as a trademark, while the Golden Oak Library card uses "Owloysius". The official My Little Pony website spells his name as "Owlysius".

Owlowiscious' character design stands out from other males in the series for having pronounced eyelashes, while other males do not.

Owlowiscious first appears as in Owl's Well That Ends Well; he retrieves one of Twilight Sparkle's papers when it blows away in the wind. Twilight notes the cold weather outside and invites the owl to spend the night in her house. She spends a good portion of the night working on her paper about comets, with Owlowiscious assisting. The next morning, Spike finds out that Twilight has taken Owlowiscious on as a "junior assistant" to lessen Spike's workload, since he regularly works himself to the point of exhaustion.

Spike grows jealous of Owlowiscious, outwardly proclaiming that he suspects Owlowiscious is trying to replace him as Twilight's assistant. His worries only deepen when Twilight rebukes him after Owlowiscious discovers a book that Spike had accidentally burned by sneezing on it and hidden in a bookshelf. Fearing for his position as Twilight's assistant, Spike attempts to frame Owlowiscious for killing a mouse using ketchup and one of Opalescence's toy mice in hopes that Twilight would be angry with Owlowiscious and get rid of him. However, Twilight and Owlowiscious walk in on Spike while he's still preparing the "crime scene", and Twilight expresses disappointment in Spike's actions. Distraught, Spike decides to run away to the Everfree Forest.

Later that night, Owlowiscious helps Twilight find and rescue Spike from a fully-grown dragon, whom Spike had enraged by intruding in his cave and eating his gemstones. Owlowiscious gives Spike an opportunity to escape by distracting the dragon. Once Spike is out of the cave, Owlowiscious once again helps out Twilight and Spike by guiding them through the dark and obstructed path through the forest. Once they reach safety, Twilight explains that Owlowiscious was able to track Spike down by following his footprints, which were stained with ketchup from Spike's earlier framing attempt. In the end, Spike realizes with Twilight's help that Owlowiscious was never trying to replace him but instead served as her nighttime assistant while he was asleep. Spike apologizes for his actions to the two, with an apology in return from Twilight for not realizing how sensitive Spike can be.

Owlowiscious appears again in May the Best Pet Win!, first in Rainbow Dash's nightmare, and then at the Pony Pet Playdate along with the other ponies' pets. He tags along with Twilight Sparkle through most of the episode.

He next appears in Just for Sidekicks, where he first watches Spike preparing a jewel cake, and subsequently eating his own ingredients, despite the owl's warnings. He then becomes the last pet volunteered to be looked after, and spends much of the episode being the level-headed 'sane one' among the rambunctious pets. He and Spike are shown to have developed a good friendship at this point.

Owlowiscious makes his first appearance in season four in Maud Pie along with the other pets, meeting Pinkie Pie's sister Maud Pie. He, like all the other pets, gets bored during Maud's activities.

In Testing Testing 1, 2, 3, as Rainbow Dash prepares for her Wonderbolts Reserves exam, while Rainbow was procrastinating, he hoots to the beat of Rainbow's stool as she tilts it back and forth, and then Spike joins along. When Twilight Sparkle notices what's happening, him and Spike run off. After Rainbow plays a prank on Twilight by placing a horn on her stool, she places her hoof up high, hoping Owlowiscious or Spike can give her a hoof-bump, but they just awkwardly back away. When it was Fluttershy's turn to help Rainbow Dash with her studying, and after she sets up a stage act about the history of the Wonderbolts featuring the other pets, and when everything goes to chaos, Owlowiscious saves Angel (who is dressed as Princess Celestia) after his platform on the stage prop of a sun broke.

Owlowiscious appears in Do Princesses Dream of Magic Sheep? when the Mane Six have a pet grooming day at Carousel Boutique. In What About Discord?, Owlowiscious perches on one of the book shelves in the Castle of Friendship library just before Twilight reorganizes her books.

In Celestial Advice, Fame and Misfortune, A Health of Information and School Raze - Part 2, Twilight has a photo of Owlowiscious on her friendship mirror in her bedroom.

In The Last Problem, Owlowiscious appears in Twilight's group shot during The Magic of Friendship Grows.

OWLOWISCIOUS is Twilight Sparkle's adopted pet owl. At first, Twilight's assistant, Spike, thought he faced some stiff competition when Owlowiscious appeared, but he quickly realized that the bright-eyed bird was just being his regular helpful self.

OWLOWISCIOUS is Twilight Sparkle's faithful fowl companion. He's an observant pet who's always looking out for his master and her friends. Owlowiscious is the strong, silent type, but when it comes to Spike's absentmindedness, he definitely gives a hoot.

Owlowiscious makes an appearance in the Pony Life theme song, and makes regular appearances in the show itself.

Owlowiscious is intelligent enough to understand and perform Twilight's various requests, such as retrieving specific books from bookshelves, though he only hoots and never speaks. He accompanies Twilight throughout Owl's Well That Ends Well and helps find and rescue Spike from a fully grown dragon, taking great risks in the process. In Just for Sidekicks and Inspiration Manifestation, however, Owlowiscious demonstrates some disdain or disapproval toward Spike's actions when he does something reprehensible. 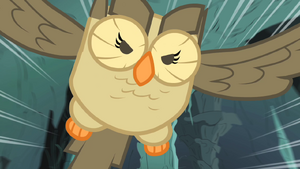