P.P.O.V. (Pony Point of View) is the twenty-second episode of season six of My Little Pony Friendship is Magic and the one hundred and thirty-ninth overall.

In this Rashomon-style episode, Twilight Sparkle must discern the truth after Applejack, Rarity, and Pinkie Pie return from a boat trip angry at each other and with three different versions of the trip's events.

Twilight Sparkle races to the Ponyville train station, eager to greet Applejack, Rarity, and Pinkie Pie when they return from their boat trip at Seaward Shoals. She mentions to Spike that the trip was an opportunity for them to "get out of their element"—to try something new. Just in case the three talk over each other out of excitement to share the details of their trip, Twilight gives Spike a scroll and quill to take notes.

As the Friendship Express pulls into the station, Applejack, Rarity, and Pinkie Pie step out with sour faces and disheveled manes and covered in mud and seaweed. When a surprised and nervous Twilight asks them how their trip was, the three do nothing but pile out of the train and walk off in separate directions.

"Well, at least you won't have to worry about them talking over each other."
— Spike

In an effort to get Applejack, Rarity, and Pinkie Pie to talk out their apparent disagreements with one another, Twilight organizes a tea party at the Castle of Friendship. When there's a knock at the door, Twilight expects her friends to enter, but their pets, Winona, Opalescence, and Gummy enter instead. Each pet offers a letter or message to Twilight saying that each of her invited friends refuse to attend a tea party that the other two are also attending.

Twilight decides that if her friends will not come to her and explain what happened on their boat trip, she will go to them instead.

Twilight and Spike start at Carousel Boutique, where Rarity is still combing the seaweed and crabs out of her mane and bemoaning the ruined state of her overcoat. Twilight—after giving Spike his scroll and quill again—asks Rarity what happened on the boat trip, and Rarity explains that "it all started at the docks".

In a flashback, Rarity meets with Applejack and Pinkie Pie at the Seaward Shoals docks, having planned a surprise cruise for the three of them to help get them out of their element. However, while Pinkie Pie remains the same in Rarity's retelling, Applejack strangely exhibits the appearance and characteristics of a salty seafaring captain. When the three get out onto the open sea, Rarity treats her friends to a tray of fancy dishes and hors d'oeuvres such as cucumber sandwiches, and Pinkie Pie offers assorted sugary treats. Rarity offers a cucumber sandwich to Pinkie Pie, before she can try it, Applejack tosses the entire tray of food overboard and laughs it off.

Twilight and Spike agree that doesn't sound like something Applejack would do. Rarity continues that Pinkie tried to lighten the mood with party games.

Pinkie raises a piñata on the ship and gives Rarity the first turn, but the ship starts to sail into stormy waters. Now wearing a handkerchief like an eye patch, Applejack steers the ship directly into the heart of the storm. Rarity tells Applejack to steer toward calmer waters, leading to an argument over the map that Pinkie soon joins. As the three fight over the map, a giant tidal wave suddenly appears to capsize and sink the ship.

Twilight is skeptical about Applejack getting sea madness and deliberately causing the ship to sink, believing that Rarity is embellishing on some details. Before Spike can learn how the three even made it back to shore, Rarity suggests they hear Pinkie's side of the story since she can corroborate.

At Sugarcube Corner, Pinkie denies Rarity's retelling of the events of the trip, saying she was the one who caused the ship to sink. Like Rarity's story, Pinkie's story "started on the docks".

In a second flashback, Pinkie meets with Applejack and Rarity at the Seaward Shoals docks, having planned a big boat party to help get them out of their element. In Pinkie's retelling, Applejack doesn't talk as much like a salty sea dog as in Rarity's retelling, but Rarity dresses like an extravagant seafarer with over a dozen ponies carrying her luggage. Soon after the three set sail, Pinkie offers a tray of sugary party treats, but Rarity rudely dismisses them as "simple" and replaces them with her tray of fancy hors d'oeuvres. She stuffs a cucumber sandwich in Pinkie's mouth, and before Applejack can help herself to the dishes, Rarity tosses them overboard, claiming "cucumber sandwiches are so ten seconds ago".

As with Rarity's story, Twilight says that Rarity would never act in such a manner. Pinkie continues that she tried to lighten the mood with party games.

After Pinkie sets up the piñata, she offers Rarity a turn, but Rarity laughs her off. Applejack volunteers to have a turn, but just as the blindfold is put on her, the ship starts to sail into stormy waters. As Applejack and Rarity argue over the map, Pinkie mistakes it for a game of tug-of-war and joins in. At that moment, the giant tidal wave appears. Despite Rarity's claim that "luxury cruises never sink", the ship capsizes.

Twilight finds Pinkie's retelling of the boat trip's events to be just as farfetched as Rarity's, and Pinkie tells her to get Applejack's side of the story. Spike again tries to learn how the three made it back to shore, but before Pinkie can explain, she is interrupted by muffins burning in the oven.

At Sweet Apple Acres, Applejack refutes Rarity and Pinkie's accounts of the trip's events by claiming they were both responsible for the ship sinking.

In a third flashback, Applejack meets with Pinkie and Rarity at the Seaward Shoals docks, having planned a treasure hunt to help get them out of their element. In Applejack's retelling, Rarity dresses and acts even more extravagantly, and Pinkie appears to be dimwitted. After the trio sets sail, Pinkie and Rarity ignore Applejack's efforts to bring them adventure by focusing on their snacks. Before Pinkie can devour Rarity's entire tray of hors d'oeuvres, Applejack trips over a volleyball and accidentally knocks it overboard, earning disdain from both of her shipmates.

As with Rarity and Pinkie's stories, Twilight and Spike believe that they would never act like that. Applejack's story continues familiarly with Pinkie's mood-lightening party games.

After setting up the piñata, Pinkie offers a turn to Rarity, but she brushes her off. Instead, Pinkie gives Applejack a turn by blindfolding her without warning. As the ship sails into stormy waters, Applejack tries to correct the ship's course using the map, but Rarity takes the map to use as a tablecloth. They fight over the map, and Pinkie joins shortly after. Like the previous two stories, it ends with the large tidal wave capsizing and sinking the ship.

Upon finishing her story, Applejack resolves to never speak to Rarity or Pinkie again until they apologize. Twilight and Spike worry how they are going to get their friends to make amends if they all blame each other for the disastrous trip.

Back at the Castle of Friendship, Twilight tries to piece together the boat trip's true course of events based on her friends' different accounts and what they had in common. When she thinks she realizes what truly happened, Twilight has an idea to get her friends to reconcile.

Twilight summons Applejack, Rarity, and Pinkie Pie back to Seaward Shoals for a "friendship emergency", and they are immediately annoyed to have all been called to the same place. As they argue over who caused the ship to sink, Spike finally demands an answer as to how they made it back to shore. They admit that they hadn't taken the ship very far out to sea, and they simply swam back to the docks. With that answered, Twilight offers to show her friends how she believes the ship really sank.

Once the ponies are out to sea, Twilight explains that her friends' stories all shared a common thread: cucumber sandwiches. She tosses the sandwich into the sea and points out another common thread in her friends' stories: the bubbling sea water and the sudden shift in weather. As it turns out, cucumber sandwiches are the favorite food of the tri-horned bunyip, and the tidal wave that sank the ship was caused by the bunyip surfacing from deep water. Applejack, Rarity, and Pinkie Pie are skeptical of this claim until the bunyip appears before them and expresses regret for sinking the ponies' ship.

However, Applejack, Rarity, and Pinkie point out the rudeness they showed each other before the ship sank. Twilight explains that each of them was so focused on bringing the other two out of their element that they failed to notice the others doing the same. As a result of this lack of communication, their activity ideas inadvertently clashed. The three ponies are touched by the trouble that their friends went to enjoy themselves on the boat trip and make amends. The ponies and Spike share a group hug and even invite the bunyip to join in.

In the final scene, the ponies and Spike have a do-over on their boat trip and have fun doing the different activities that Applejack, Rarity, and Pinkie originally planned, ending with a round of ice cream. Twilight expresses to Spike that "there's nothing like a luxurious adventure boat party to get you out of your element". She replaces Spike's scroll and quill with an ice cream goblet, and Spike agrees with the sentiment.

Twilight Sparkle: So how was the trip?

Rarity: Please, darling. I don't know if I'll ever be able to discuss it. It's far too painful! [gasps dramatically]
Spike: If it's too difficult to talk about, we completely understand.
Rarity: Well, since you dragged it out of me...

Applejack: [sea dog accent] The sea air carries a portent for trouble this day. 'Tis a treacherous and perilous journey that lies ahead of us! We sail to adventure... or our very doom.
Rarity: I... have no idea what you just said.

Spike: Then what happened?!
Rarity: Oh, the boat sank. Obviously.

Rarity: Sorry! Cucumber sandwiches are so ten seconds ago.

Applejack: Oh, there's no emergency! I'm just waitin' for an apology.
Rarity: An apology?!
Pinkie Pie: What?! Why would you want me to apologize when it was Rarity's fault?!
Rarity: What are you talking about? Applejack clearly caused the boat to sink! She stranded us in the middle of the ocean!
Spike: [frustrated scream] Will somepony please tell me how you made it back?!

Pinkie Pie: I figured the boat trip was the perfect time to do things that were silly and fun!
Rarity: And I was just trying to give the two of you the elegant cruise I thought you deserved.
Applejack: And I just wanted to give you two a high seas adventure, since that'd be somethin' new and different for y'all.
Applejack, Pinkie Pie, and Rarity: Ohhhh. 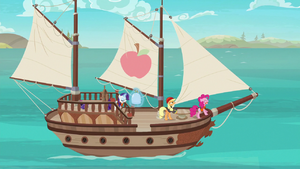