Several paparazzi ponies appear in various episodes in the series, including Earth ponies Long Shot and Snappy Scoop, unicorn Press Release, and Pegasi Big Shot, Eff Stop, and Tracy Flash. They are unnamed in the show, "Tracy Flash" being a placeholder name, but some are named varyingly in merchandise and other depictions.

Long Shot, Snappy Scoop, Press Release, Big Shot, Eff Stop, and Tracy Flash all first appear in the season one episode Green Isn't Your Color. They take pictures of Fluttershy after she is discovered by Photo Finish and becomes famous. This is Tracy Flash's only appearance in the series thus far.

Snappy Scoop, Big Shot, and Eff Stop appear again outside the Grand Galloping Gala in The Best Night Ever.

In season two, Long Shot, Snappy Scoop, and Press Release appear in The Mysterious Mare Do Well as Rainbow Dash's paparazzi when she becomes famous after performing several acts of heroism.

They appear again in the season four episode Leap of Faith taking pictures of Apple Bloom and Granny Smith after their performance at the Ponyville swim meet. Here, Snappy Scoop appears as a stallion instead of a mare. In Equestria Games, they appear as Games spectators in the Crystal Empire stadium.

In season six, Long Shot and Snappy Scoop appear at the Daring Do Convention in Stranger Than Fan Fiction.

In season seven, Press Release, Snappy Scoop, Long Shot and Big Shot appear in the fashion contest crowd in Honest Apple. Long Shot also appears as a member of the "Sweet Apple Admirers" in Fame and Misfortune. Snappy Scoop appears at the end of It Isn't the Mane Thing About You selling magazines.

In the card game's Crystal Games expansion set, Press Release is named Press Pass on card #44 U, which gives her the description "Wherever Press Pass goes to report the news, a crowd is sure to follow. A crowd that DEFINITELY doesn't help when it comes to solving problems."

"That was some of the most amazing aquabatics I've ever seen! How in Equestria did you do it? Hard work? Lots of practice?"
— Snappy Scoop, Leap of Faith 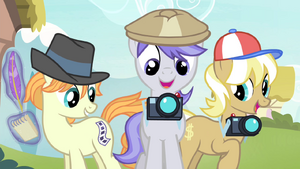 Retrieved from "https://mlp.fandom.com/wiki/Paparazzi_ponies?oldid=1954498"
Community content is available under CC-BY-SA unless otherwise noted.