Parasol is a female Pegasus pony with a light yellow coat, wisteria mane and tail, web orange eyes, and a cutie mark of three purple umbrellas. She shares her design with Sassaflash. She is unnamed in the series, but she is named in other media.

Parasol shares her name with a G1 Earth pony.

Parasol appears frequently as a background pony in Ponyville and Cloudsdale. In party scenes, such as in The Ticket Master, A Bird in the Hoof, and The Best Night Ever, she often appears wearing a light blue skirt and her eye color is changed to bright turquoise.

She first appears in Friendship is Magic, part 1 as a member of the crowd in the town hall, awaiting the start of the Summer Sun Celebration. In Feeling Pinkie Keen, she hovers above Derpy and Sunshower Raindrops after they accidentally drop a bunch of objects from the trailer onto Twilight Sparkle. She gives them a startled look before flying off with an unimpressed expression on her face.

Parasol works in Cloudsdale's weather factory in Sonic Rainboom, attending to all three sections of weather development. She also partakes in the Best Young Flyer competition, albeit with her eye color switched to green. She initially wears the tag numbered "6", which is swapped with Rainbow Dash's "5".

In Hearts and Hooves Day, she appears standing across from "Silver Script" underneath a parasol, blushing while Apple Bloom sings "all the good ones are taken" during The Perfect Stallion. She also appears in Hurricane Fluttershy aiding Ponyville's Pegasi in the creation of the tornado required to lift the water into Cloudsdale for the rainy season.

In Magic Duel, she makes a cameo appearance flying towards Ponyville town hall during Trixie's return. In Sleepless in Ponyville, she makes a background appearance flying over Ponyville as Scootaloo scoots though the streets. In Wonderbolts Academy, she makes various appearances as a Wonderbolt Academy cadet, at one point as a wing pony to Orange Swirl. In Games Ponies Play, she appears in Rainbow Dash's flashback in Cloudsdale as Fillydelphia is announced as the host for the Equestria Games. In Magical Mystery Cure, she appears singing on the roofs on Ponyville during Morning in Ponyville and later in attendance of Twilight Sparkle's princess coronation in Canterlot.

Parasol appears flying over the Mane Statue in Manehattan at the beginning of The Gift of the Maud Pie. In No Second Prances, she appears in the audience for Trixie's magic show. In A Hearth's Warming Tail, she appears during Hearth's Warming Eve Is Here Once Again, putting clouds in place for Hearth's Warming Eve and attending the celebration inside the Castle of Friendship. In Flutter Brutter, she makes a background appearance pushing a cloud in Cloudsdale in a Weather Factory uniform. In Spice Up Your Life, she appears in Canterlot as a patron of the Tasty Treat. In The Cart Before the Ponies she makes a background appearance spectating the Applewood Derby during Derby Racers. In The Fault in Our Cutie Marks, she makes a background appearance attending Gabby's cute-ceañera. In Every Little Thing She Does, she helps move storm clouds to the Castle of Friendship after a spellcast Rainbow Dash overhears Starlight Glimmer's need of water to put out a kitchen fire. In Where the Apple Lies, she appears in a flashback attending a surgery lecture at the Ponyville Hospital.

In Celestial Advice, Parasol makes a cameo appearance flying over Ponyville town hall with Starburst during Princess Celestia's flashback of when she considered sending Twilight to Ponyville. In A Flurry of Emotions, she makes cameo appearances entering Spearhead's art exhibit in a Ponyville café with Rainbow Swoop and later as a customer at a toy store. In Rock Solid Friendship, she appears as a passenger on the Friendship Express and covers her ears as Pinkie Pie celebrates her sister Maud Pie's consideration of moving to Ponyville. In Fame and Misfortune, she appears in the mob of arguing ponies outside the Castle of Friendship elicited by the publication of the Mane Six's Journal of Friendship. In Triple Threat, she makes a cameo appearance talking to Shoeshine in Ponyville. In It Isn't the Mane Thing About You, she inadvertantly steps on Rarity's cloak while walking in Ponyville, exposing her ruined mane.

In School Daze - Part 1, Parasol appears flying away from the School of Friendship after Ocellus arrives at the school transformed as a giant insect monster. In Yakity-Sax, she makes background appearances walking towards Ponyville town hall, at a party at Sweet Apple Acres and attending Pinkie Pie Appreciation Day at town hall. In A Rockhoof and a Hard Place, she makes a cameo appearance walking towards Mage Meadowbrook's home, which is now a health clinic.

In Between Dark and Dawn, Parasol appears gathering around the new bridge in Ponyville replaced by Princess Celestia and Princess Luna. In A Trivial Pursuit, she makes a background appearance flying through Ponyville with Emerald Green. In Growing Up is Hard to Do, she makes another cameo appearance flying through the Applelosa County Fair with Cloud Kicker. In The Ending of the End - Part 1, she appears flying over the Canterlot Castle courtyard during preparations for Twilight Sparkle's coronation as ruler of Equestria.

Two versions, both with different cutie marks and one with a different mane color, each appear in Boast Busters and Magic Duel. A gray-coated variant appears in Winter Wrap Up and The Super Speedy Cider Squeezy 6000, and a lavender-coated variant appears in My Little Pony Equestria Girls: Forgotten Friendship. A pony with Parasol's design and color scheme, but without wings or a cutie mark, appears in Boast Busters watching Twilight move the Ursa back to its cave.

In My Little Pony Equestria Girls: Forgotten Friendship, Parasol makes a brief cameo in the second establishing shot of Canterlot.

Parasol appears in a picture with her name listed on page 175 of The Wonderbolts Academy Handbook.

Parasol appears in a photograph in episode 3, All About Alicorns, and in episode 8, Land of Harmony.

Parasol appears in episode 5 of Fundamentals of Magic, "When Magic Goes Wrong".

Parasol, with orange eyes, appears next to Starry Eyes on page 67 of Little, Brown's My Little Pony Friendship is Magic official guidebook My Little Pony: The Elements of Harmony. 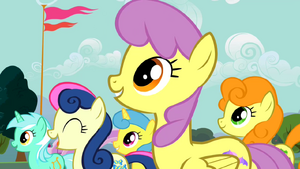