Parasprites are insect-like creatures that first appear in Swarm of the Century as the antagonists. The name "parasprite" is a portmanteau of parasite and sprite, a mythical forest creature from folklore. Lauren Faust had compared them to tribbles from Star Trek,[1] whose voracious appetites and rapid multiplication turn them from pets to pests.

A parasprite infestation in Ponyville is the subject of the episode Swarm of the Century. Fluttershy encounters a single parasprite, who chirps at her and endears itself to her. When she tries to feed it, it eats an entire basket of apples in mere seconds. Fluttershy unwittingly brings it into town to show to her friends, who are all unfamiliar with the creature and become enamored with it, except Pinkie Pie who storms off in search of musical instruments. The ponies' adopted parasprites become huge swarms overnight; it is only then that the ponies discover that parasprites can quickly and asexually reproduce by coughing up another parasprite. The pests relentlessly devour crops and food, but are able to consume wood, fabric, and inorganic materials after Twilight Sparkle casts a spell to stop them from eating food. The ponies make several attempts to round up the parasprites, but the pests keep getting loose. Twilight runs to Zecora's hut and consults her, but Zecora offers no solution.

"Tales of crops and harvests consumed. If these creatures are in Ponyville... you're doomed."
— Zecora

Right before Princess Celestia's arrival at Ponyville, Pinkie Pie appears with several musical instruments that she had been collecting throughout the episode from her first encouter with the parasprites. She furiously plays on the instruments, and much like the Pied Piper she leads the parasprites into the Everfree Forest in a line, passing by her friends and Princess Celestia, who are amazed at the sight. Princess Celestia thanks Twilight for the "parade" in honor of her visit, but says she has to attend to an "infestation" of some sort in Fillydelphia and cancels her scheduled visit to Ponyville, much to Twilight's relief.

During the first duel between Twilight and Trixie in Magic Duel, Twilight magically summons a single parasprite, which eats multiple pies and their tins then coughs up a second parasprite. Twilight quickly disposes of them both before they can cause trouble like before.

In Leap of Faith and a flashback to the same episode in Twilight's Kingdom - Part 1, Big Wig appears with her mane and tail covered in motionless parasprites.

In Apple Bloom's dream in Bloom & Gloom, parasprites are mentioned and a depiction of one appears. The Pest Control Pony tells Apple Bloom that anyone "with a trombone can get rid of parasprites."

In To Where and Back Again - Part 1, Starlight Glimmer wonders aloud if the distant silhouette of Derpy is a parasprite.

In A Flurry of Emotions, a toy store in Ponyville sells plush parasprite toys. In Daring Done?, the Ponyville Chronicle mentions that a parasprite infestation in Fillydelphia was eradicated.

In Growing Up is Hard to Do, parasprite toys appear as prizes at a game booth in the Appleloosa County Fair.

Parasprites are shown in the Discover the Difference game. Five of them appear in the Swarm of the Century image.

Parasprites are the focus of the game Swarm of the Parasprites. Some of the parasprite varieties that appear in this game are exclusive to it.

A swarm of parasprites is shown in the Ruckus Reader interactive storybook Things That Go Bump in the Night. They appear in the imagination of Applejack, who refers to them as "mean bugs [who] want to eat our food".

In the mobile game, they appear as barriers, needing multiple of an Element of Harmony's shard (depending on color) to make them disappear. They usually appear in swarms of 5.

"Don't let their cuteness fool you! Parasprites are adorable creatures, but they'll eat everything in sight!"
— Twilight Sparkle, in-game description

A parasprite appears on the WeLoveFine T-shirt "RD Big Adventure".

Five parasprites, along with a host of characters from the show, appear on the Comic Con 2011 promotional poster. There are two on its left side and three on its right.

On the Brown Parasprite Enterplay collectible trading card, the quote says: "What is the airspeed velocity of an unladen parasprite?" This is a reference to Monty Python and the Holy Grail where parasprite is replaced with swallow.

PARASPRITES may seem sweet and innocent, but feeding these little insects may cause more trouble than they're worth. Their gluttonous appetites cause them to rapidly multiply, quickly turning them from pets to pests. 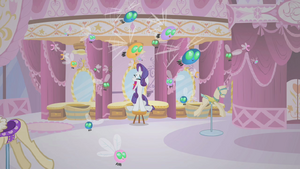 Retrieved from "https://mlp.fandom.com/wiki/Parasprites?oldid=2140435"
Community content is available under CC-BY-SA unless otherwise noted.