Not to be confused with Construction Pony.

Parcel Post is a male Earth pony who appears in the series as a mail delivery pony and a beekeeper. He has a light brown coat, a moderate brown mane and tail, blue eyes, and a cutie mark of a stamp with a heart on it. He is unnamed in the show, but he is named in merchandise.

On May 16, 2015, Brian Lenard stated in a tweet about Parcel Post, "Apparently this mail pony's special talent is loving stamps."[2] During the same day, Michael Vogel tweeted, replied, and retweeted others' tweets about Parcel Post.[3]​[​specify​]​

Parcel Post first appears in the season two episode The Last Roundup as a mail pony. He delivers a letter to the barn at Sweet Apple Acres, believing the welcome home party that Twilight Sparkle and her friends throw for Applejack is his birthday party. Twilight takes the letter he delivers and slams the barn door in his face, upsetting him, but Pinkie Pie pops out moments later to give him a slice of birthday cake.

In Putting Your Hoof Down, Parcel Post makes a brief non-speaking appearance, carrying away another mail pony in a mail cart after he's been told off by Fluttershy.

Parcel Post later appears in the season four episode Castle Mane-ia as a beekeeper. Applejack and Rainbow Dash borrow a swarm of bees from him as part of their "Most Daring Pony" competition.

In the season five episode Make New Friends but Keep Discord, Parcel Post appears again as a mail pony, delivering a letter to Discord's home dimension. He is last seen being carried away by an otherworldly monster.

Parcel Post appears as a mail pony in the manga​[​specify​]​ with a speaking role.

In the Crystal Games expansion set of Enterplay's collectible card game, Parcel Post is named on card #88 C, which gives him the description "Parcel is the most reliable mail carrier in Ponyville. He simply won't rest until every last letter in town is delivered!"

"Wow, this is the best surprise ever! How did you know it was my birthday?"
— The Last Roundup

"Are you "Discord or current resident"? I can't find any street numbers in this place."
— Make New Friends but Keep Discord

"Well, I got a little lost after I escaped the flying badgers... Can you point me in the direction of the bottomless pit? I think I can make my way back from there."
— Make New Friends but Keep Discord

"One more gift, try to hurry, don't be late!"
— My Little Pony Best Gift Ever 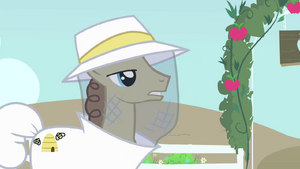