Parental Glideance is the seventh episode of season seven of My Little Pony Friendship is Magic and the one hundred and fiftieth overall. The title is a pun on "parental guidance".

In this episode, Rainbow Dash's parents discover she's a Wonderbolt and start showing up at every event to cheer her on. However, their unbridled enthusiasm embarrasses Rainbow and pushes her to the brink.

This episode aired on Canada's Treehouse TV channel on May 7, 2017, thirteen days ahead of its scheduled premiere on Discovery Family.[1]

The episode begins with Apple Bloom and Sweetie Belle loading Scootaloo onto a large slingshot aimed at Cloudsdale. As part of her school assignment to write a report about her most inspirational hero, Scootaloo intends to go to Cloudsdale and interview Rainbow Dash. Because only Pegasi can stand on clouds, Apple Bloom and Sweetie Belle are unable to accompany her. Before the Cutie Mark Crusaders can consider alternative means of travel, the slingshot rockets Scootaloo into the sky.

Upon arriving in Cloudsdale, Scootaloo ends up at the home of Rainbow Dash's parents, Bow Hothoof and Windy Whistles, much to her extreme excitement. After her initial starstruck awe, Scootaloo explains to Bow and Windy that she's doing a school report about their daughter and putting together a scrapbook dedicated to her. Bow and Windy, the incredibly proud parents they are, give Scootaloo a tour of their house and show her Rainbow's bedroom and vast collection of medals and trophies.

When Scootaloo asks where Rainbow's "Wonderbolt stuff" is, Bow and Windy think she's referring to her collection of Wonderbolts memorabilia. However, Scootaloo actually refers to mementos from her time as a Wonderbolt Academy cadet and eventually a full-fledged Wonderbolt, drawing much confusion from the two parents.

"Our daughter's a Wonderbolt?!"
— Bow Hothoof and Windy Whistles

At the Wonderbolt Academy, Rainbow Dash practices a flying routine with the Wonderbolts when Bow Hothoof and Windy Whistles' loud cheering suddenly disrupts them. After Scootaloo informed them that their daughter is a Wonderbolt, the already proud parents are even prouder. They smother Rainbow with pride and affection and introduce themselves to Spitfire and the other Wonderbolts. Rainbow chews Scootaloo out about telling her parents that she's a Wonderbolt without her permission, saying that while she loves her parents dearly, they can be very embarrassing.

During the next Wonderbolts show, Scootaloo recounts to Bow and Windy their daughter's journey to becoming a Wonderbolt, from her acceptance into the academy to becoming a Reserves member to her encounter with deceitful veteran Wind Rider and her eventual induction as a full member. As the Wonderbolts perform, Bow and Windy get considerably carried away in showing their daughter support, cheering boisterously and setting off fireworks. Their overzealous support of Rainbow Dash even carries over into Wonderbolt autograph signings, ribbon-cutting ceremonies, and photo-ops.

When Rainbow's parents go as far as cheering for her in the Wonderbolts locker room, she finally snaps and angrily says their support is too much for her to bear. She tells them their over-passionate cheering is why she didn't tell them she was a Wonderbolt in the first place, and she asks them to leave. Saddened by their daughter's outburst, Bow Hothoof and Windy Whistles leave the locker room in tears. Scootaloo, shocked by Rainbow's cruel dismissal of her supportive parents, decides to write her school report about someone else.

Parents are your biggest fans

Rainbow Dash catches up with Scootaloo to offer an explanation for why she snapped at her parents. She reveals that, when she was a little filly, she wasn't always a fast flyer, and the only thing she could win in competitive races was participation awards. However, her parents cheered for her just as loudly and embarrassingly as in the present day, despite her never winning any races. Over time, she started to win races and place higher in competitions, but her parents' overzealous support alienated the other foals.

Scootaloo expresses some jealousy that Rainbow Dash has parents as supportive as they are. She explains further that because of their lifelong support, Rainbow was given the confidence she needed to become a better flyer. Realizing she had taken her parents for granted, Rainbow feels guilty for yelling at them and resolves to fix her mistake.

A short while later, Scootaloo takes Bow Hothoof and Windy Whistles to a special Wonderbolts performance, in which Rainbow apologizes for upsetting them and thanks them for helping her become the pony she is today. At the end of the performance, Rainbow tells her parents that she's their biggest fan, and the three make amends.

Some time later, Scootaloo gives her school report on Rainbow Dash to her class at the Ponyville Schoolhouse and receives a passing grade. All of a sudden, Rainbow Dash and her parents appear in the classroom window and cheer loudly for Scootaloo, to the frustration of Cheerilee.

Scootaloo: I'm her biggest fan!
Bow Hothoof: Now, little trotter, what you say is impossible. [excitedly] Because nopony is a bigger fan of our Rainbow Dash than us!

Scootaloo: You don't know that your daughter's a Wonderbolt? And I got to tell you?!
Bow Hothoof and Windy Whistles: Uhhhhhhhhh...
Scootaloo: Oh, wow! You should see your faces right now!

Bow Hothoof: I can't believe it! My daughter, a Wonderbolt! [sobs] So proud!
Rainbow Dash: Dad, hold it together. We're in public.

Fleetfoot: Your folks were definitely loud, but they weren't that bad.

Rainbow Dash: Mom and Dad, you are both too supportive! This is exactly why I didn't tell you I was a Wonderbolt! You're just... too much!
Windy Whistles: Did... Did we do something wrong?
Rainbow Dash: Yes! The fireworks, the cheerleading, and-and how do you even compare who is better or worse at hanging up a towel?!
Bow Hothoof: We're just trying to be supportive.
Rainbow Dash: Well, I'm tired of it! I've had enough of you two being so proud of every little ridiculous, insignificant thing I do!

Scootaloo: Ya know, some ponies would dream of having parents like that.
Rainbow Dash: Yeah, right! Name one!
Scootaloo: [sighs] Me. Growing up, I never thought I'd be the best at anything, because nopony ever told me.

Rainbow Dash: Mom and Dad, I want you to know that I'm your biggest fan. 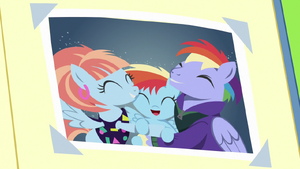