Party Favor is a male unicorn pony who first appears in the season five premiere. He is a resident of a village, formerly led by Starlight Glimmer, in which its inhabitants had all given up their cutie marks.

Party Favor first appears in The Cutie Map - Part 1 welcoming Twilight Sparkle and her friends when they arrive at Our Town. He and Double Diamond introduce them to the village's founder Starlight Glimmer. Later in the episode, he, Sugar Belle, and Night Glider express great interest in Twilight and her friends' cutie marks, harboring a desire to have his own back. They inform the six about the vault in which their marks are kept, inadvertently leading them into a trap laid by Starlight.

In The Cutie Map - Part 2, when Fluttershy appears to convert to the town's ways, Starlight Glimmer asks her to identify the ponies who told the Mane Six about the vault. Party Favor takes the blame for Sugar Belle and Night Glider, protecting them from punishment. When he is locked up with the rest of the Mane Six, he accepts that it is useless to rebel against Starlight. Upon his release, he begs her forgiveness.

When Fluttershy reveals to the villagers that Starlight Glimmer still has her cutie mark, Party Favor feels deceived and betrayed. He and the other villagers turn against Starlight to reclaim their cutie marks. He, Sugar Belle, Night Glider, and Double Diamond then pursue a retreating Starlight through the mountains to recover the Mane Six's cutie marks, during which he makes binoculars and a bridge out of balloons. After Starlight escapes, he thanks Twilight and her friends for helping them realize what they've truly been missing in their lives.

He is seen again at the end of The Cutie Re-Mark - Part 2, where he and the other ponies at the village are shown forgiving Starlight for her actions.

Party Favor appears at Starlight's graduation ceremony in Celestial Advice. He appears walking beside Double Diamond, and again at a table with Night Glider in Hard to Say Anything.

In The Ending of the End - Part 2, Party Favor takes shelter with other unicorns inside the School for Gifted Unicorns as Canterlot closes itself off from the other pony races. He also takes part in the final battle against Queen Chrysalis, Lord Tirek, and Cozy Glow. In The Last Problem, he briefly appears in Pinkie Pie's group shot during The Magic of Friendship Grows.

In My Little Pony The Movie, Party Favor mourns the "death" of his balloon animal, Brian, when it is deflated by Tempest Shadow's airship.

Party Favor is a character in Gameloft's mobile game, and was added in the Version 2.5 update on September 24, 2015 (for iOS) and September 30, 2015 (for Android). His in-game description states "A dashing young stallion in dazzling blue. When it comes to fun, Party Favor knows a thing or two!"

In the Equestrian Odysseys expansion set of Enterplay's collectible card game, card #206 UR is of Party Favor. In the High Magic expansion set, card #29 U gives Party Favor the description "For a pony who can create working balloonoculars and suspension balloonbridges, making temporary pony balloon "Friends" is easy peasy."

"Daydreaming is one thing, but you mean actually having it put back on? That seems extreme."
— The Cutie Map - Part 1

"Didn't you see what just happened out there?! Your friend has accepted our way! You will all accept our way! It's only a matter of time!"
— The Cutie Map - Part 2

"They tried to break me! They wouldn't stop talking about how different they are, and that somehow makes their friendship stronger![...]But I didn't listen! I knew what they were up to, and I didn't listen!"
— The Cutie Map - Part 2

"It's you who have taught us something. We all came to this village because we were searching for something missing from our lives. We thought Starlight had given it to us, but now... now it seems it was in front of us all along. It's us!"
— The Cutie Map - Part 2

"I may only be the third best party pony in all of Equestria, but we're still going to have the very best Sunset Festival ever!"
— Enterplay collectible card game Defenders of Equestria #30 U card of Party Favor 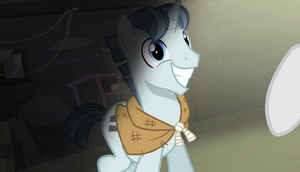