Party Pooped is the eleventh episode of the fifth season of My Little Pony Friendship is Magic and the one hundred and second episode overall.

After an important summit with visiting yaks goes wrong, Pinkie Pie embarks on a journey to the yaks' homeland to save Equestria's relations with them.

On Twitter, writer Nick Confalone on May 5, 2015 noted "secrets hidden in plain sight" of Enterplay collectible card game Absolute Discord #7 C card mentioning Yakyakistan, on May 19, 2015 stated that this episode "is weird,"[1] that "[t]he original title was Journey to the Center of Pinkie Pie,"[2] and that "the original pitch was 'I dunno, it'll be like seven years in tibet, but with pinkie pie instead of brad pitt?'",[sic][3] in late June 2015 told that he wrote the episode over a year earlier,[4] and on June 26, 2015 clarified that his "this episode is weird" wasn't meant to be a Cheese Sandwich reference.[5]

The yaks and yeti/baboon creature were designed by Kora Kosicka.[6][7]

The scene when the Mane Six discover Pinkie's lair reappears in Cakes for the Memories.

At the Castle of Friendship, Twilight Sparkle is nervous about the soon-to-arrive royal delegation from the remote region of Yakyakistan. Noting the region's previous isolation from the rest of Equestria, Twilight hopes to make a good first impression for when Princess Celestia arrives later.

When the delegation led by yak Prince Rutherford appears, Twilight greets them and offers a banquet of traditional yak cuisine as a show of goodwill. Unfortunately, Prince Rutherford hates the food, and he and his fellow short-tempered yaks proceed to demolish the castle foyer.

As the Mane Six clean up the mess that the yaks made, Twilight asks Pinkie Pie to show the yaks around Ponyville and try to make them feel at home until the friendship party later that evening.

At Sweet Apple Acres, Applejack fashions beds of hay for the yaks to rest on during their stay in Ponyville. However, because the beds are not made from Yakyakistan hay, Rutherford and the yaks are displeased, and they demolish the inside of the barn. Pinkie Pie tries to appease the yaks with a tea party with Fluttershy's animal friends, all wearing yak antlers. But when the yaks discover the antlers that the animals are wearing are fake, they trample over the tea party.

At Carousel Boutique, Rarity appeals to the yaks with Crystal Empire-imported fabric. Believing the fabric to be edible, the yaks start eating it. Outraged that it isn't Yakyakistan fabric, they trample over everything in the boutique as well. Finally, Pinkie Pie has Rainbow Dash make a blanket of snow so the cold-accustomed yaks feel more at home. Unfortunately, the yaks are still not satisfied.

Leave it to Pinkie

Back at the castle, the Mane Six discuss the yaks' disastrous visit so far, and Pinkie is under more pressure than ever in making the friendship party a success. Though incredibly nervous, Pinkie assures her friends that she can pull it off.

Pinkie returns to Sugarcube Corner and confides in Gummy about the stress she is under. As she worries about how to make the party feel like Yakyakistan, she gets an idea. When her friends go to check in on her, they only find a note saying she'll be back in time for the party. During this, yet another attempt to please the yaks ends badly.

Meanwhile, Pinkie rides the Friendship Express to the Crystal Empire, but she is forced to stop at Dodge Junction because of sheep obstructing the train tracks. Luckily, Cherry Jubilee is on her way to the Empire to make a delivery of cherries, and she lets Pinkie Pie hitch a ride. However, because Cherry and her stagecoach ponies spent the previous night picking cherries, they are considerably fatigued and end up steering the stagecoach into a ravine.

Back in Ponyville, Spike appears to successfully entertain the yaks with his piano playing. But when Spike steps away from the piano and it keeps playing on its own, the yaks realize it's a self-playing piano. Fed up, the yaks not only decide to leave but also declare war on Equestria.

Through a series of odd coincidences and musical misadventures, Pinkie Pie makes it to the northern borders of the Crystal Empire, guided there by Princess Cadance. After a run-in with a monstrous yeti/baboon-like creature, Pinkie finally arrives at Yakyakistan's gates and leaps aboard a young yak's sled. However, just before the yak can lead her through the gates, the sled slides back down the slope and carries her all the way back to Ponyville, thus making her entire journey a wasted effort.

As Twilight laments her failure at Sugarcube Corner with her friends, she accidentally opens a trap door under Pinkie Pie's bedroom. The ponies end up in a secret party planning basement, where Pinkie keeps various party supplies and detailed files on the kinds of parties that everyone likes.

As Pinkie returns to her bedroom, she hears her friends in the basement and joins them, recounting her own failure as a party planner. Though her friends assure her that she isn't a failure, Pinkie recalls the ponies who helped her on her journey and wishes to show the yaks how great Equestria is. Just then, she gets an idea.

With the yaks stuck in Ponyville due to more sheep blocking the train tracks, Pinkie catches up with them and invites them to the friendship party.

As the yaks, dozens of ponies, and Princess Celestia enjoy the friendship party, Pinkie apologizes to Prince Rutherford. She says that, instead of trying to make Equestria feel like Yakyakistan, they should have made it feel like a natural home so the yaks could see why the ponies love living there. Rutherford is moved by Pinkie's friendship efforts and calls off his declaration of war, and he and Pinkie agree that ponies and yaks will be friends for a thousand moons. As Celestia congratulates Twilight, Rutherford and Pinkie Pie seal their newfound friendship and understanding with a big, strong hug.

Applejack: Y'know... it's goin' okay.
Rarity: Satisfactory, I'd say.
Rainbow Dash: It could be better.
Fluttershy: [whispering] It's not very good.
Pinkie Pie: It's a disaster!

Pinkie Pie: It's going to be my most happy-tacular party ever! I hope!
Rainbow Dash: Why are your eyes darting around like that?
Pinkie Pie: It's what I do when I'm not nervous! [laughing hysterically]

Cherry Jubilee: I ought to warn you though – me and the boys are powerful tired 'cause we was up all night countin' cherries. Hey there! Wake up!
Pinkie Pie: Counting cherries? How many?
Cherry Jubilee: Four hundred and seventeen thousand, two hundred and thirty-four.

Pinkie Pie: There we were, face-to-face with Falling Pony Ravine. Down, down, down! And then, suddenly... Pow! We were rescued mid-air by the Wonderbolts! And then they gave me a ride to Manehattan, I joined a traveling band, we played some shows here and there, got popular, almost made it big until creative differences tore us apart. 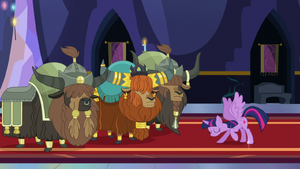