"There's no reason to be nervous."

"Nothing to worry about."

"We made friends with a yak prince!"

Announcing the yaks from Yakyakistan!

"If things not perfect, yaks get mad."

"Yaks always get mad when things not perfect."

"Is it okay to be nervous now?"

Oooh, we have a bad feeling about this!
Add a photo to this gallery

Trying to please the yaks

Yeah, I eat my bed too sometimes...

"No matter where it comes from!"

"This not yak snow!"

Darn it. I can never please these stupid yaks.
Add a photo to this gallery

"It could be better."

"My most happy-tacular party ever!"

I think Pinkamena is back.

"They're gonna hate it!"

"They're just too sensitive!"

"They're working hard to make a traditional Yakyakistan cake."

On a train to Yakyakistan / At Dodge Junction

"And so my quest begins."

"I know what you're thinking."

"Because I'm the party planner."

"I gotta climb the mountains north of the Crystal Empire..."

"...and come back with something authentic!"

"Please tell me this is magical sand-colored snow."

What does this episode have with eating stuff then throwing them up?

"I ought to warn you, we were up all night counting cherries."

"Counting cherries? How much?"

Taking a ride with Cherry Jubilee

"I will soon triumphantly enter..."

Can we just take a moment to appreciate the shading here?

To Yakyakistan and back again / Worried about Pinkie

Well, here I am at Yakyakistan.

Here's what happened. Cherry Jubilee and I fell off the ravine...

But thee Wonderbolts came and saved me at the last moment!

They brought me to Manehattan...

And before I knew it, I ended up joining a band!

We were such a huge success!

We recorded so many albums!

But because of our creative differences, we disbanded at the Crystal Empire.

But, I was able to find the passage to Yakyakistan!

That's how I ended up in Yakyakistan... in a single afternoon.

This trapdoor is a secret place in this house.

Pinkie Pie, watch out for the baby yak!

What a half-pipe grind!

This is gonna be close...

...and Pinkie sticks the landing!

Tiny yak welcomes you to Yakyakistan.

...with me!
Add a photo to this gallery

Pinkie's party-planning basement / Back in Ponyville

This is after the lights turned on.

"Pinkie Pie's made files for everypony in town!"

"But she's afraid of quesadillas."

What?! Who in Equestria would be afraid of quesadillas?

Should I be surprised? 'cause I'm not.

"I'm all the way back where I started!"

"To helping Twilight befriend the yaks."

Huh? Who's in my Party Cave?

"She's been planin' folks's fiftieth birthday parties! But they ain't nearly that old!"

"She's already plannin' their one-hundredth too."

Epilogue: A party for the yaks

An adorable way to practice your magic. And it looks like she's getting better!

It's a long story.

Now she knows how her friends feel when she hugs them.
Add a photo to this gallery 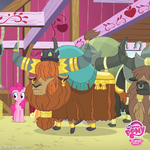 Add a photo to this gallery
Retrieved from "https://mlp.fandom.com/wiki/Party_Pooped/Gallery?oldid=2156790"
Community content is available under CC-BY-SA unless otherwise noted.