Start a Wiki
A party cannon is a cannon that fires party-related items from its barrel, such as balloons, confetti, and pastries. Pinkie Pie's party cannon serves as a running gag throughout the series and other media. The model name Z&R is a nod to IDW cover artist Zander Cannon.[1]

Pinkie Pie's party cannon first appears in the season two episode Sweet and Elite. It has a light blue barrel and two pink wheels with flowers painted on, it is operated via pull-string, explosive fuse, or trigger button, and when it goes off, it is often accompanied by a distinctive "squeak" sound. Pinkie states, "I never leave home without my party cannon!", and she uses her cannon to produce a birthday party for Twilight Sparkle in an instant. Pinkie later uses the cannon to disrupt the Canterlot Garden Party.

In A Canterlot Wedding - Part 2, Pinkie Pie uses her party cannon to fight against an invasion of changelings.

Pinkie's party cannon briefly appears in The Crystal Empire - Part 1 when she uses it to ask whether she has to celebrate Twilight passing her test.

In Spike at Your Service, Pinkie suggests using her cannon as part of an elaborate plan to have Spike save Applejack's life. In a brief gag, Rarity is seen inside the cannon. In Games Ponies Play, she uses it in her and her friends' Crystal Empire welcoming cheer for Ms. Peachbottom.

In Pinkie Pride, when Pinkie Pie is surpassed by fellow party pony Cheese Sandwich, she briefly seals her party cannon away in a closet. However, she uses it later in a goof-off against Cheese.

In addition, Cheese uses his own model of party cannon. This cannon, referred to in song lyrics and merchandise as the Cannonball Surprise, is much larger than Pinkie's and has several cannon barrels and tank-like wheel treads. The Cannonball Surprise serves as one of the centerpieces of Rainbow Dash's birth-iversary party.

In Castle Sweet Castle, Pinkie Pie hides numerous party cannons around the Castle of Friendship to make it feel more like a home for Twilight. In Amending Fences, she uses her party cannon for Moon Dancer's party.

In The Gift of the Maud Pie, Pinkie trades her party cannon away to a shady pony for a rock pouch for her sister Maud Pie. When Maud discovers what Pinkie gave up for her, she arranges a return trade to get the party cannon back. The cannon also makes an appearance in Newbie Dash. Pinkie at first intends to set off a party cannon at the Party Palace in The Saddle Row Review, but Rarity objects. The cannon makes a brief appearance in Pinkie's closet in 28 Pranks Later.

In Celestial Advice, Pinkie uses a party vacuum cleaner the same color scheme as her party cannon to clean up the mess after the party. In Secrets and Pies, a party cannon similar to Cheese's cannon is seen in the background during Pinkie's flashbacks of Rainbow Dash's birth-iversary party.

In School Daze - Part 1, Pinkie fires off her cannon before the School of Friendship opens, and also shows off a miniature version of the cannon. In School Daze - Part 2, each of the Mane Six, Spike, and Starlight Glimmer has their own party cannon. In the same episode, Pinkie uses her party cannon to rid the Castle of the Two Sisters of a puckwedgie infestation. In Horse Play, Pinkie has a much larger model of her party cannon that she calls "Big Bertha". In Marks for Effort, she fires off two party cannons while congratulating the Cutie Mark Crusaders on becoming honorary School of Friendship graduates. In Yakity-Sax, in an attempt to cheer Pinkie up, Applejack lets her use her party cannon. However, the cannon only fires weakly, and when Applejack examines it, it shoots confetti right in her face. Maud later packs up the cannon after being instructed by Pinkie to take it back to the Pie family rock farm.

In 2, 4, 6, Greaaat, Rainbow Dash gets a party cannon from Pinkie Pie when she asks for help coaching the School of Friendship's Buckball cheer squad. During a disastrous rehearsal, the cannon ends up blasting the members with confetti and also blasts Snips during another rehearsal. The cannon is used effectively during the performance. In The Summer Sun Setback, Wensley and Apple Bumpkin appear pushing party cannons as Twilight Sparkle and Spike try to convince the Flaming Sky Firework Unicorn Troupe to put on a fireworks show for the final Summer Sun Celebration.

In My Little Pony Equestria Girls, Pinkie Pie's human counterpart laments not having a party cannon of her own. In My Little Pony Equestria Girls: Friendship Games, she owns two large electronic cannons, which she and Sci-Twi use to kick the "Welcome Crystal Prep" party into high gear. Unlike pony Pinkie's party cannon, human Pinkie's cannons are pink and yellow, and they don't have wheels.

In Twilight Under the Stars, Pinkie Pie fires a party cannon at the Canterlot Celestial Society Members' Social which covers Twilight in confetti when she tries to get the attention of astrophysicist Rosette Nebula. In Festival Filters, a party cannon appears in a "party picture" of the Starswirled Music Festival that Pinkie Pie shows to her friends on her phone. She later fires the cannon. In Festival Looks, Pinkie fires a party cannon in her bedroom while introducing a "classic" look using confetti for an internet video on music festival fashion hosted by Rarity. The confetti from the cannon then seemingly enters Rarity's bedroom.

In My Little Pony The Movie, Pinkie Pie's "easy bake confetti cake cannon" shoots a five-layer cake on top of Twilight, much to her annoyance. Near the end of the film, Pinkie uses her cannon to shoot herself, Rainbow Dash, Fluttershy, Applejack, Rarity, and Spike through a cyclone in order to reach Canterlot Castle and save Twilight and Tempest Shadow from the Storm King.

On My Little Pony: Friendship is Magic Issue #1 page 16, Pinkie Pie uses her party cannon to blast changelings with cake batter. On Issue #12 1 million cover A, an advertisement on the back of Shining Armor's comic offers a party cannon among its items for send-away order. On Issue #32 Baltimore variant cover RE, Pinkie Pie fires herself out of her party cannon through an inter-dimensional portal; on Issue #33 pages 15-16, Spike uses Pinkie's cannon to fire a meteorite into the atmosphere. Party cannons also appear on Issue #34 page 14, Issue #35 pages 13-15, and Issue #37 page 10. In Issue #44, Pinkie converts her party cannon into a real cannon that fires live ammunition.

One of Pinkie Pie's lyrics in the It's a Pony Kind of Christmas song Twelve Days of Christmas is "two party cannons".

In Princess Luna and the Festival of the Winter Moon, Pinkie Pie's "party cannon artillery" is mentioned in chapter 5, "News from Canterlot". In Lyra and Bon Bon and the Mares from S.M.I.L.E., Pinkie once again uses her party cannon against changelings in chapter 14, "The Saddle Hawkins Square Dance".

In the Hot Topic online promotional video Hot Minute with Pinkie Pie, one of Pinkie's questions is "PARTY CANNONS: HOW MANY", to which she answers, "Three!"

In Gameloft's mobile game, Pinkie Pie's party cannon and Cheese Sandwich's party tank are among the decor items that can be obtained in the Pinkie Pride-inspired community event "The Ponyville Party".

In My Little Pony: Puzzle Party, the party cannon is used as a power-up to clear away all cubes in a selected 3x3 grid.

In the second wave of the Friendship is Magic Collection series of toys, a Z&R model party cannon is included in the Welcome Wagon Large Story Pack with Cranky Doodle Donkey. The cannon is also packaged in the Explore Equestria Donut Shop Playset and with a Pinkie Pie figure and Boneless figure in the upcoming Guardians of Harmony toyline. 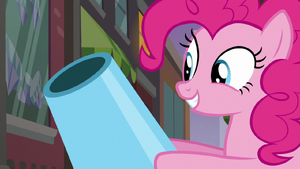 Retrieved from "https://mlp.fandom.com/wiki/Party_cannons?oldid=2144766"
Community content is available under CC-BY-SA unless otherwise noted.