My Little Pony Friendship is Magic Wiki
Register
Don't have an account?
Sign In
Advertisement
in: Season 1 episodes, Recognized for awards
English

Party of One is the twenty-fifth episode of the first season of My Little Pony Friendship is Magic. In this episode, Pinkie Pie investigates her friends’ excuses for not attending one of her parties.

The episode was #6 in the We Heart Ponies Fan Favorite Mare-a-thon, in the leadup to Hearts and Hooves Day. The Treehouse TV airing of this episode mutes out all occurrences of the word "losers."

This episode was nominated a Leo Award for Best Direction in an Animated Program in 2012.[2]

At the beginning of the episode, Pinkie Pie visits each of her friends and sings invitations to Gummy's one-year birthday party. When she is finished, she is exhausted and remarks to Gummy, "Next time, I think I'll just pass out written invitations."

Gummy’s birthday party is held on the second floor of Sugarcube Corner. Pinkie tells Rainbow Dash and Applejack she's happy they made it to the party, and the two say they'd never miss it. Applejack bobs for apples, but bites a fake spring-loaded apple that pulls her back into the vat. When Dash emerges from the apple bob, Gummy is clinging to her face.

Rarity compliments Pinkie’s punch, but spits it all over Pinkie's face when she sees Gummy dipping in the punch bowl. She forces a smiles and sips more punch, but spits it into a plant pot when Pinkie turns away. Pinkie joins Twilight and Fluttershy, who compliment her party. Pinkie accidentally knocks Twilight and Fluttershy into a wall while dancing, but later all the friends and Gummy dance together. That night, when the ponies are leaving, Twilight suggests that they "do this again soon,” and Pinkie agrees.

The next morning, Pinkie visits the Golden Oak Library and gives Twilight an invitation to Gummy's "after-birthday party" that afternoon at 3 o'clock. Twilight claims she can’t go because she needs to study.

Pinkie goes to Sweet Apple Acres to invite Applejack. She nervously says she can't go because she has to pick apples. Pinkie scrutinizes her for a few seconds, smiles, and says, "Okey-dokey-lokey!"

The scene changes to Carousel Boutique, where Rarity is watching Spike take out the trash. She tells him to take a shower because he smells, and he adoringly floats in the air while emitting pink heart-shaped bubbles. Pinkie comes along and invites Rarity to the party. She declines, saying she has to wash her hair. When Pinkie says her hair doesn't look dirty, Rarity dips her head in the trash and gallops back into the boutique. Pinkie reassures herself, "A party is still a party even with only two guests."

Outside Fluttershy’s cottage, Pinkie invites Rainbow Dash and Fluttershy. Dash says they'd love to go, but they have to house-sit for "Harry," a bear. Pinkie is surprised that there is a bear living in a house in Ponyville. The two Pegasi hastily elaborate on their excuse before they fly off.

Something strange is going on

Back at Sugarcube Corner, Pinkie wonders how all her friends are busy. She sees Twilight sneaking into the shop and uses a tin can telephone to eavesdrop on Twilight’s hushed conversation with Mrs. Cake. Twilight picks up a wrapped package and leaves.

Pinkie puts on Groucho Marx glasses and decides to secretly follow Twilight. Twilight delivers the package to Rarity, who says she'd hate for Pinkie to "ruin everything." Pinkie acquires a new disguise, a bale of hay wearing Groucho Marx glasses. In a deserted alley, Rarity transfers the package to Fluttershy. Pinkie has added a trench coat and a baseball hat to her hay disguise. When Fluttershy walks out of the alley, Pinkie tries to hop away, but Fluttershy is startled by the sight of her costume and flies away.

Right then, Rainbow Dash walks by Pinkie and accidentally greets her. Demanding to know what her friends are up to, Pinkie chases Dash all the way to the Sweet Apple Acres barn. Applejack slams the door shut before Pinkie can get in. Pinkie asks to take a look inside the barn, but Applejack tells her there's construction going on and she can't come in. Angered, Pinkie leaves, and Applejack and the others sigh in relief.

Pinkie declares that she knows who to ask about her friends’ “secrets and lies.” The scene cuts to Spike sitting in front of a spread of gems in Pinkie’s room. Pinkie shines a lamp in Spike's face while Gummy secures him to the chair by tugging on his tail. When Spike dodges her questions by giving irrelevant information, Pinkie becomes aggressive, and he asks her what she wants him to say.

"Tell me that my friends are all lying to me and avoiding me because they don't like my parties and they don't want to be my friends anymore!"
— Pinkie Pie

Spike repeats it and Pinkie cries, "Ah-ha! I knew it!" Her hair "deflates" and loses its curliness, and her coloration turns darker. Surrounded by darkness under a cone of light, she sadly repeats Spike's confession. She hands Spike the spread of gems.

The scene fades in to Pinkie thanking her "friends" for coming to Gummy's after-birthday party. The friends are Mr. Turnip, Rocky, Sir Lintsalot, and Madame Le Flour, inanimate objects voiced by Pinkie with different accents. While making chit-chat and puppeteering the objects, Pinkie experiences strange twitches that are accompanied by musical cues and color-card backgrounds that fade in and out. At a certain point the color-card backgrounds stay, and the inanimate objects move and talk of their own accord. They convince Pinkie to never speak to her friends again. The background returns to normal to show a crazed Pinkie moving and voicing the objects. She is interrupted by a knock on the door. Rainbow Dash enters and apologizes for being in such a rush earlier. She invites Pinkie to come to Sweet Apple Acres, but Pinkie refuses and keeps playing with her imaginary friends.

Dash ends up dragging Pinkie by her tail to Sweet Apple Acres. When they enter the barn, which has been turned into a party room, the other friends shout "Surprise!" Upset, Pinkie says that they threw a farewell party to kick her out of the group, and they've been lying to and avoiding her all day. The friends explain that they were keeping Pinkie's birthday party a secret. Pinkie looks around at the decorations and the cake with her picture on it and returns to her normal self. She pulls them into a group hug and the friends sigh in relief. She apologizes for doubting them, and they forgive her. Twilight narrates her letter to the Princess while she and her friends enjoy the party. Once she finishes narrating, Pinkie asks her friends to dedicate the party to Gummy too, because he's upset that his party was cut short. The episode ends with an iris wipe on Gummy playing with a balloon.

Pinkie Pie: Ooh, this is my jam!

Pinkie Pie: You said we should have another party soon, and... it's soon! Here’s your invitation!

Pinkie Pie: Oh! And Twilight, you shouldn't hit the books. You should really just read them.

Spike: Anything else I can do for you, most beautiful one?
Rarity: [sniff] [whimper] Hmm... perhaps you could take a bath. How do I put this delicately? You smell like a rotten apple core that’s been wrapped in moldy hay, and dipped in dragon perspiration.

Pinkie Pie: No, no, no. Talk about our friends.
Spike: Oh, okay. Let's see, there's Twilight Sparkle: she's a unicorn. Good with magic, a real brainiac. And then you got Rarity! Total knockout. Twilight seems to think I don't have a chance with her, but, meh... what does she know? Let's see, there's Fluttershy, a pegasus afraid of heights. Huh, what's up with that?

Rainbow Dash: [panting] We're... here...
Twilight Sparkle, Applejack, Rarity, and Fluttershy: [in unison] Surprise!
Fluttershy: I thought she would be more excited.
Pinkie Pie: Excited? Excited!? Why would I be excited to attend my own farewell party?!?

Pinkie Pie: How could I forget my own birthday?! 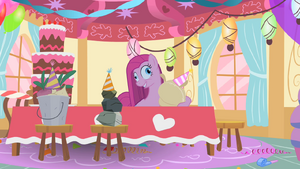 Party of One image gallery