Pearly Stitch is an elderly female Earth pony with a very pale blue coat, pink mane and tail, blue eyes with dark blue pupils, and a cutie mark of a ball of purple yarn. She is unnamed in the show, credited only as "Elderly Pony" in Made in Manehattan and as "Older Pony" in Discordant Harmony, but she is named in merchandise.

Pearly Stitch first appears in The Mysterious Mare Do Well standing with other elderly ponies on a balcony. When the balcony breaks and falls, Pearly Stitch and the other elders are saved by Rainbow Dash.

In Leap of Faith, she attends Flim and Flam's demonstration of their miracle curative tonic. In Simple Ways, she makes a cameo appearance when Trenderhoof visits Ponyville. She also appears at the Rainbow Falls Traders Exchange in Trade Ya! and in the Crystal Empire stadium in Equestria Games.

Pearly Stitch appears in Manehattan in Made in Manehattan. She watches the play that Coco Pommel and the Method Mares put on and has a brief speaking role.

In The Gift of the Maud Pie, she again appears in Manehattan where she notices Pinkie's party cannon going off from the confined space.

Pearly Stitch appears in Discordant Harmony with a speaking role. In The Perfect Pear, Pearly Stitch appears as a young mare in multiple flashbacks. In Fame and Misfortune, she appears as part of the mob, saying that she thinks Twilight Sparkle was better before she became a princess. In Once Upon a Zeppelin, she is one of multiple ponies photographing Twilight Velvet and Night Light.

In Grannies Gone Wild, she appears walking in an arcade in a Las Pegasus hotel.

In The Point of No Return, she appears napping in the lobby of the Silver Shoals retirement community. She later appears exercising with other elderly ponies in the community's gardens and shakes her head and points to the garden gates when Twilight and Spike ask her if she has seen Dusty Pages.

In Shake Things Up!, Pearly Stitch briefly appears walking past Applejack's juice bar at the Canterlot Mall. In Coinky-Dink World, she appears dancing with Mr. Waddle at the Sweet Snacks Café. In Good Vibes, she makes a background appearance walking in the Canterlot Mall.

In Super Squad Goals, Pearly Stitch appears in Sunset Shimmer's comic book, knitting on a park bench as the Equestria Girls chase a jewelry store thief. Applejack uses her superhuman strength to throw the bench with her still on it to unsuccessfully stop the thief. Pearly Stitch safely lands on the bench and does not react to the incident.

In Rollercoaster of Friendship, Pearly Stitch briefly appears as an Equestria Land patron.

In the segment "Dashing Through the Mall", Pearly Stitch makes a cameo appearance receiving a holiday present from Sand Trap.

Pearly Stitch appears on My Little Pony: Friends Forever Issue #27 pages 17-19. In My Little Pony: Ponyville Mysteries Issue #3, she accidentally starts a fire at the Ponyville Retirement Village while trying to make a Filly Guides sum'yum.

In Enterplay's collectible card game, Pearly Stitch is named on card α #73 C, which lists the quote "I'm going to knit you a sweater, by gum, and I ain't budgin' until it's finished."

"Oh, you're such a dear, thank you! This is so nice. Haven't seen the neighborhood this friendly since Charity moved away!"
— Made in Manehattan

"I'm sorry, dearie. Were you talking to me?"
— Discordant Harmony

"Me? Uh, I thought you were talking to..."
— Discordant Harmony

"Twilight was better before she got wings!"
— Fame and Misfortune

"I'm going to knit you a sweater, by gum, and I ain't budgin' until it's finished."
— Enterplay collectible card game card α #73 C of Pearly Stitch 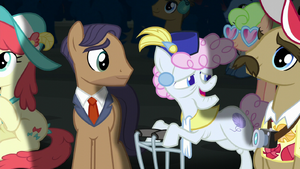