Peewee is a male phoenix and Spike's former pet, adopted by him in the season two episode Dragon Quest.

According to Meghan McCarthy at the 2013 Las Pegasus Unicon, featuring photos of Peewee in the background of Just for Sidekicks was decided upon during the episode's storyboarding phase.[1]

Peewee first appears in the season two episode Dragon Quest. Spike and a group of teenage dragons, led by Garble, go on a "dragon raid" with the intent of destroying a nest of phoenix eggs. However, they find that most of the eggs have already hatched, except for one. After the two adult phoenixes and their hatched chicks give Garble and the other teenagers the slip, Spike finds the unhatched egg.

Garble and his friends tell Spike to smash the egg, but Spike refuses and instead protects it from the other dragons. Twilight Sparkle, Rainbow Dash, and Rarity appear to defend Spike, and Twilight teleports all of them away to safety. Spike keeps the unhatched phoenix egg, and when the phoenix inside hatches, he names him Peewee—appropriating a nickname the teenage dragons gave Spike—and welcomes him to the family.

At the beginning of the season three episode Just for Sidekicks, a gallery of photos on a shelf depicts Spike looking after Peewee. One picture depicts Spike sharing some ice cream with him, and another depicts the carton ending up on Twilight's head, covering her in ice cream. The final picture shows Spike returning Peewee to his parents.

In Molt Down, Spike and Rarity visit the phoenix nests (Spike to see Peewee, Rarity to pick up some phoenix feathers for her latest design), where they find that Peewee has grown into a matured phoenix and moved into his own nest. Spike tries to greet Peewee with a hug, but their close contact irritates the stone scale on Spike's cheek, causing Spike to jump away in pain.

On My Little Pony Micro-Series Issue #9 page 2, Spike mentions that seeing Twilight and Fluttershy prepare for a pet show with Owlowiscious and Angel makes him miss Peewee.

Young Peewee appears at least on the front cover of the Level 1 Reading storybook Ponies Love Pets!, perched on top of Spike's head.

Young Peewee appears in a magazine's​[​specify​]​ adaptation of Dragon Quest.

Enterplay trading card series 1 card #44 is of young Peewee, which gives him the description, "Peewee is a baby phoenix being raised by a baby dragon to be a pony! Let's hope he doesn't get too confused by all this. Peewee is the newest addition to the family, living in the Ponyville library as Spike's just-hatched pet. Spike risked his neck to save the little phoenix's egg from a troop of teenage dragons out to have a good time at the expense of others. Will Peewee fit in with his new family? Birds of a feather flock together!" Peewee is also mentioned on series 3 card #E47 of Dragon Quest.

On page 178 of The Ultimate Guide: All the Fun, Facts and Magic of My Little Pony, young Peewee appears in a picture with Spike.

A sticker set included with issue 41 of Signature's My Little Pony magazine features one of young Peewee.

PEEWEE became Spike's pet when he hatched from a phoenix egg! A group of bad dragons tried to persuade Spike to smash the egg when he found it, but thankfully he didn't. Now he and Peewee are the best of friends.

PEE WEE is a lil' baby Phoenix who hatched from an egg found by Spike. He enjoys hanging out with Spike and eating ice cream. One day, he hopes to grow up, burst into flames, and be reborn anew! 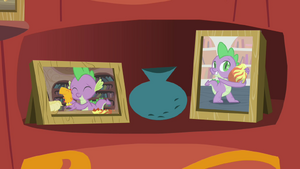 Retrieved from "https://mlp.fandom.com/wiki/Peewee?oldid=2148944"
Community content is available under CC-BY-SA unless otherwise noted.