Perfect Pace is a male background Earth pony with a blue coat, bright orange mane and tail, golden brown eyes, and a cutie mark of an hourglass. He is unnamed in the show, but he is named in merchandise and other media.

Perfect Pace most commonly appears among other high-society Canterlot ponies.

He first appears in The Best Night Ever as a guest at the Grand Galloping Gala. He is one of several chorus singers in At the Gala, during which he smiles at Fluttershy.

In Sweet and Elite, Perfect Pace appears several times during Becoming Popular (The Pony Everypony Should Know) and at the Canterlot Garden Party. He appears as a judge for the dessert competition at the end of MMMystery on the Friendship Express (with a different cutie mark), and he attends both wedding ceremonies as well as the reception in A Canterlot Wedding - Part 2.

Perfect Pace walks through Canterlot with Sweetie Drops in The Crystal Empire - Part 1, and he appears at Twilight Sparkle's princess coronation in Magical Mystery Cure.

Perfect Pace appears in Maretropolis in Power Ponies, at Fashion Week in Rarity Takes Manehattan, in Sweetie Belle's dream and in Canterlot in For Whom the Sweetie Belle Toils, in the stadium crowd in Equestria Games, and at the Crystal Empire in Twilight's Kingdom - Part 1.

In Make New Friends but Keep Discord, Perfect Pace (with another different cutie mark) appears once again as a guest of the Grand Galloping Gala. In Made in Manehattan, he appears several times in Manehattan.

In Shadow Play - Part 2, Perfect Pace makes a background appearance standing by a taxi in Manehattan.

In She's All Yak, Perfect Pace appears among other high-class ponies during Fit Right In. In The Last Laugh, he attends Kettle Corn's birthday party where he lines up as a customer for Cheese Sandwich after he makes the party successful.

A unicorn version of Perfect Pace appears in A Canterlot Wedding - Part 1, Magical Mystery Cure, and Twilight's Kingdom - Part 1, and a Pegasus version of him appears in Rarity Takes Manehattan.

Perfect Pace is a playable character in Gameloft's mobile game. His in-game description states, "You'll have trouble keeping pace with this prim and proper pony!"

In the Canterlot Nights expansion set of Enterplay's collectible card game, Perfect Pace is named on his card #58 C, which gives him the description "Perfect Pace is the official timekeeper for Canterlot. His friends have come to terms with his habit of checking his pocket watch every four minutes like clockwork." A WeLoveFine.com T-shirt titled "Rarity Prefers Diamonds" shows him, "Sir Pony Moore", "Star Gazer", and Twilight Sky wearing jackets and bow ties. 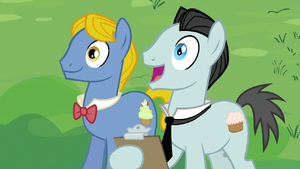