My Little Pony Friendship is Magic Wiki
Register
Don't have an account?
Sign In
Advertisement
in: Pages that need copyediting, Pages that need improvement, Earth ponies,
and 3 more
English

For other uses, see Food and beverage.

Perfect Pie, or Apple Pie, is a female Earth pony in the Apple family. She has a cream caramel coat, two-toned green mane and tail, light caramel eyes, and a cutie mark of three apple pies. She is unnamed in the show, but she is named in merchandise and other media.

Perfect Pie first appears in Friendship is Magic, part 1, during the Apple family's reunion when they first meet Twilight Sparkle. She later appears in Green Isn't Your Color, marveling at the newly popular Fluttershy, and in Over a Barrel, appearing at several points in Appleloosa.

In The Mysterious Mare Do Well, Perfect Pie is seen cheering for Rainbow Dash after several of her heroic moments and is later seen at the thank-you parade for Mare Do Well. In The Last Roundup, she appears at Applejack's welcome home party and later in Dodge Junction. She also appears at both wedding ceremonies in A Canterlot Wedding - Part 2.

Perfect Pie appears as an attendant of the Appleloosa Rodeo in Appleoosa's Most Wanted. She also appears in Party Pooped.

In Fame and Misfortune, Perfect Pie appears at Sweet Apple Acres as one of the "Sweet Apple Admirers".

Perfect Pie makes a cameo in My Little Pony: Rainbow Roadtrip, selling Granny Smith some pastries from her stand.

Perfect Pie appears in My Little Pony The Movie during We Got This Together, among the crowd when Tempest Shadow's airship arrives in Canterlot, and during Rainbow.

Perfect Pie is an available character in Gameloft's mobile game. She was added in version 1.9.0, renamed from earlier second-party merchandise's "Apple Pie" to first-party and other second-party merchandise's "Perfect Pie" in version 4.1.0, and remodeled to match apple Pinkie Pie in version 4.7.0. Her in-game character model's pony version has a different eye color than in the show, while the game's icon of her,[1] a loading screen[2] of the game's, and a Gameloft promotional image[3] use fanart of her with her in-show eye color and with her tail colors (not shown in the icon of her) patterned differently.[4] The game depicts her pony form wearing her bonnet from Over a Barrel, The Last Roundup, Pinkie Pride, Appleoosa's Most Wanted, Party Pooped, and Fame and Misfortune.[5] Her in-game bios states "With a name like Apple Pie, it's no surprise this pony's as sweet as they come!"

Perfect Pie is named with a trademark symbol in the fourteenth and twenty-first mystery pack waves of mini-figure toys and collector cards. Her wave 14 card states, "She loves homemade pie!" Her wave 21 card states, "She makes yummy treats for all."

In reference books, Apple family members listed by name without individual identification include Apple Pie on The Elements of Harmony page 28 and Perfect Pie on Ultimate Guide page 59.

"I thought we were playin' tag?"
— My Little Pony: Friendship is Magic Issue #85

"Thank goodness you were here, Applejack!"
— My Little Pony: Friendship is Magic Issue #85 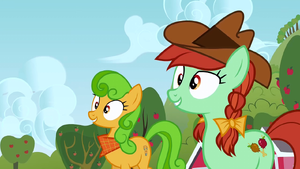