Pharynx is a male changeling and the older brother of Thorax who is first mentioned in Triple Threat and physically debuts in To Change a Changeling.

In contrast to other changelings before metamorphosing, Pharynx has purple eyes, red neck fins and tail, blue wings, and more distinct back armor with shades of purple. Following his metamorphosis, Pharynx is taller—though slightly shorter than Thorax—and he has a different color scheme and red horns.

In entomology, the term "pharynx" refers to the part of the throat behind the mouth and nasal cavity and above the oesophagus and larynx.

Pharynx is first mentioned in Triple Threat, as Thorax explains to Spike his leadership troubles.

In To Change a Changeling, Pharynx first appears when Starlight Glimmer and Trixie visit the Changeling Kingdom, mistaking them for trespassers and capturing them. After Thorax clears up the misunderstanding, Pharynx is revealed to be the only changeling who has not transformed, preferring the hive's old ways of taking love from others. As a result, he spends most of his time ripping up flowerbeds and decorative vines, kicking holes in the walls, and hissing angrily at the other changelings.

According to Thorax, Pharynx was the head of changeling patrols during Queen Chrysalis' reign, thus leaving him without any duties after Thorax assumed the throne. He fears that Pharynx's inability to accept the hive's new ways and the misery he causes other changelings will threaten Thorax's leadership efforts. Starlight and Thorax try to talk to Pharynx, briefly connecting with them because of their pasts, but he soon dismisses them and calls them losers.

Later, during the changelings' "feelings forum", Pharynx finally voices his aggravation and disgust to the rest of the swarm, calling them weak for failing to properly deal with a maulwurf that menaces their kingdom. After the forum is adjourned, Pharynx overhears Starlight and Trixie talking about convincing Thorax to banish him from the kingdom.

Thorax later tells Starlight and Trixie about how Pharynx used to defend him from bullies and try to toughen him up when they were little. Inspired by this, Starlight comes up with another plan for the hive to accept Pharynx, but he has already left the kingdom by this time. Starlight, Trixie, and Thorax go looking for him and eventually find him fighting the maulwurf on his own. They try to help him, but the monster is too powerful, even after the rest of the swarm arrives as well. Thorax and Pharynx team up to turn the maulwurf's strength on itself, and they soon succeed in driving it underground.

When asked why he took on the creature after leaving his home, Pharynx admits that he still cares about the hive. The other changelings admit their fault and ask that Pharynx continue to protect them from outside threats. Pharynx accepts and finally transforms into a metamorphosed changeling like the rest of the swarm.

Pharynx makes a cameo appearance in School Daze - Part 2 as Fluttershy asks Thorax for Ocellus to come back to the School of Friendship.

Pharynx briefly appears in My Little Pony Best Gift Ever, celebrating Hearth's Warming with Thorax, Ocellus, and several other changelings.

In The Ending of the End - Part 2, Pharynx, alongside the rest of the changelings, appears during the final battle against Queen Chrysalis, Lord Tirek, and Cozy Glow after being rallied by Ocellus. In The Last Problem, Pharynx attends Twilight Sparkle's coronation ceremony. He also briefly appears in Rainbow Dash's group shot during The Magic of Friendship Grows.

Pharynx:
Thorax's big brother once ran security for the Changeling Hive--but now that most changelings have transformed, he doesn't have as much to do. This...hasn't exactly made him happy.
Metamorphosed Pharynx:
He may not love much, but he loves his brother--and the Changeling Hive he's sworn to protect! And realizing that has made all the difference.

"They were lurking on our grounds! In the old days, I would've already feasted on their love."
— To Thorax, To Change a Changeling

"What a ridiculous comparison! We are nothing alike!"
— To Change a Changeling

"I put you in a bag. I thought it went great."
— To Starlight Glimmer, To Change a Changeling

"I don't take advice from ponies. The only thing I take from you is breakfast. At least, I used to."
— To Starlight Glimmer, To Change a Changeling

"The changelings used to be a fearsome swarm! Now we sit around talking about our feelings so much, you can't even stop a maulwurf from eating all your "pretty plants"! I could've sent that thing packing before, but I guess now we'll just try to lead it away and hope that keeps us safe!"
— To Change a Changeling

"Well, I'm sorry if I don't get excited about pretty flowers and feeling circles and—"
— To Change a Changeling

"Lucky for me, you didn't give up on me."
— To Thorax, To Change a Changeling 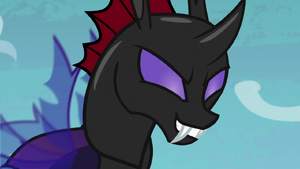