They were created for Friends Forever Issue 12 by writer Barbara Randall Kesel, with the script description "The two sisters running the cart are plush avatars of pony happiness: they resemble the treats"[1] "in their shiny colorful way.They[sic] have their manes done up in rounded buns with shiny hairnets."[2] "Their hooves are bedazzled to match their ‘noms. They appear friendly, prosperous, and well-fed."[3] They were designed by artist Brenda Hickey,[4][5] who took design inspiration from Japanese Sweet Lolita fashion,[6] was asked "Are they from the Lollipop-Guild [sic]?" and replied "That is likely what their origin story is!",[7] and later stated that "they're not a reference."[8] They were color-designed by colorist Heather Breckel.[9]

Barbara Randall Kesel has been asked "is the duo donning the air of eerie mischief IRL, or does it belong with Pac-Mare & the board game? :)" "I mean, when they start looking sort of sinister, tempting Pinkie to keep eating their treats, is it real or her imagination?" and answered "Well, y'know, when the treats call and you try to resist, doesn't EVERYTHING look sinister?"[14]

Marcie Pan and Fawn Doo appear in the My Little Pony: Friends Forever Issue #12 story running the PheNOMNOMenons cart. They first appear on page 5, eager to serve PheNOMNOMenons to Pinkie Pie but looking disappointed whenever Twilight Sparkle pulls her away. When Twilight herself succumbs to the PheNOMNOMenons' deliciousness, Marcie Pan and Fawn Doo try to serve her and Pinkie more treats, slowly taking on more sinister facial expressions. The sisters are last seen on page 21, saddened when Pinkie Pie has learned to resist her temptations.

In My Little Pony: Friends Forever Issue #29, Marcie Pan appears on page 1 at the Equestrian Geological and Gemological Society convention. 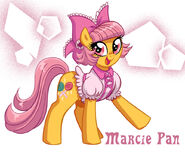 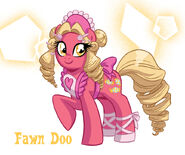