Philomena is Princess Celestia's pet phoenix, residing in Canterlot and introduced in A Bird in the Hoof.

According to A Bird in the Hoof writer Charlotte Fullerton, Philomena was originally named Phoebe;[7] this name would be used by Dana Simpson for her human Phoebe and Her Unicorn character who appears in a picture[8] on Phoenix Comics & Games (and Everfree Northwest) exclusive cover RE of My Little Pony: Friendship is Magic Issue #20.[9]

In late June 2015, Jim Miller was asked "Will we see Philomena on the show ever again or is she stuck to Princess Celestia's quarters?" and answered "Never say never. But no current plans to see her any time soon."[10]

"She is quite a sight, isn't she?"
— Princess Celestia referring to Philomena

Philomena appears in A Bird in the Hoof, introduced at the party held at Sugarcube Corner in honor of Princess Celestia's visit. The bird initially appears to be very sickly, coughing and molting uncontrollably. Fluttershy, worried at the sickly state of the bird, takes Philomena away to her home without telling anyone so that she can heal her properly. Throughout the episode, Fluttershy tries desperately to heal Philomena, but she had never seen a bird like her before and all her attempted treatments seem to make her condition worse. Philomena eventually escapes, leading Fluttershy and Twilight Sparkle into a chase around Ponyville to catch her. They eventually find her, but when she loses her last feather, Philomena bursts into flames. As Fluttershy cries at the sight of the ashes, Princess Celestia arrives. The princess bends her head down over the pile of ash and tells her incinerated pet to stop fooling around and scaring everypony. Suddenly, Philomena rises again, renewed and in better shape.

Princess Celestia explains to Fluttershy that Philomena, like all phoenixes, plucks all her feathers and burns into ashes at the end of her life cycle, only to rise from the ashes and renew herself. Princess Celestia describes her pet bird as being mischievous, prompting her to apologize for all the troubles she had caused. Philomena herself is even shown blushing and behaving rather regretfully towards Fluttershy. As the newly revived phoenix begins flying around for a bit, she intentionally drops one of her feathers into Fluttershy's mane, much to the pony's delight. Soon after, Rainbow Dash gets Philomena to tickle the royal guards on the nose as a prank; when they successfully make the guards laugh, they share a high five.

During Magical Mystery Cure, Philomena's ashes appear in one of Fluttershy's flashbacks.

Philomena appears in episode 2 of Fundamentals of Magic, "Magical Creatures".

On the outside, PHILOMENA seemed like a poor, suffering, and squawking old bird, but Princess Celestia's pet had a secret. After losing her feathers and bursting into flames, she transformed herself into a beautiful phoenix.

PHILOMENA is Princess Celestia's majestic Phoenix. The mystical bird might look feeble and featherless, but give her some time. Soon a brand-new creature will emerge in a burst of fire! No big deal.

In the Friendship is Magic Collection, a mini-figure of Philomena is included in the Canterlot Castle Ultimate Story Pack with Princess Celestia and the Storm King. In the Premiere set of Enterplay's collectible card game, card #207 gives Philomena the description Philomena has been the royal pet of Princess Celestia for so many years. She's learned a trick or two spending so much time in royal company. The Equestrian Odysseys expansion set card #209 attributes to Philomena the quote Awk squawk! 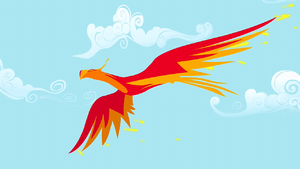 Retrieved from "https://mlp.fandom.com/wiki/Philomena?oldid=2166946"
Community content is available under CC-BY-SA unless otherwise noted.