Start a Wiki
Phoenixes are magical birds that regenerate by bursting into flames and being born anew, as the first phoenix introduced in the series, Philomena, does at the end of A Bird in the Hoof.

The first phoenix in the series is introduced in A Bird in the Hoof, though throughout the episode the characters are not aware that the bird is a phoenix. Princess Celestia introduces Fluttershy to her pet bird Philomena, who appears almost featherless and sickly. Throughout the episode Fluttershy attempts to nurse Philomena back to health, but Philomena keeps molting, coughing, keeling, and generally acting sickly. Eventually, Philomena runs away and soon bursts into flames and collects into a pile of ashes on the ground, much to Fluttershy's horror and other spectators' dismay. Princess Celestia, who arrived moments earlier, explains to Fluttershy that phoenixes occasionally renew themselves by bursting into flames and rising from the ashes left behind. Philomena pokes her head out from the ashes and rises into the air in brilliant red plumage and a transformed appearance.

Spike encounters more phoenixes in Dragon Quest, and eventually adopts one. In the episode, a group of adolescent dragons persuades Spike to participate in raiding a phoenix nest for eggs. Spike distracts the parent phoenixes by throwing a rock at them, prompting them to chase after him. At the same time, the other dragons invade the nest. Instead of finding unhatched eggs, they find a group of hatchlings, who manage to escape. The dragons give chase, but the parent phoenixes blind their pursuers with a flash of light and escape with their hatchlings. One unnoticed unhatched egg is left behind and discovered by Spike, who rescues the egg and later names the hatched phoenix Peewee.

In Just for Sidekicks, photos show Spike attempting to raise Peewee and returning him to his parents.

In The Cart Before the Ponies, Scootaloo has a phoenix-themed cart.

In Grannies Gone Wild, phoenix plush dolls appear on an arcade game console. In Molt Down, Spike and Rarity visit the phoenix nests and find that Peewee has fully matured. Rarity collects phoenix feathers for her fashion designs, but they cause her to lose her hearing.

In Growing Up is Hard to Do, a phoenix plush doll appears as a prize at a game booth in the Appleloosa County Fair.

A phoenix is mentioned by Sunset Shimmer in My Past is Not Today.

On the back of a printed insert bundled in the Barnes & Noble Special Edition of the chapter book My Little Pony: Equestria Girls: Sunset Shimmer's Time to Shine, a letter to Rarity from Sunset Shimmer includes a sketch of a phoenix.

A PHOENIX is a mystical bird that sheds its feathers and is reborn in an explosion of brilliant flames.

An orange-and-white phoenix[1] appears on Phoenix Comics & Games (and Everfree Northwest) exclusive cover RE of My Little Pony: Friendship is Magic Issue #20.[2]

According to her "About the Author" bio, Penumbra Quill, the "author" of the Ponyville Mysteries series, owns a phoenix named Firebrand. 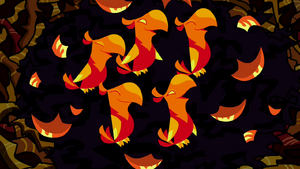 Retrieved from "https://mlp.fandom.com/wiki/Phoenixes?oldid=2140223"
Community content is available under CC-BY-SA unless otherwise noted.