Photo Finish is a female Earth pony and famous fashion photographer in Equestria who first appears in the season one episode Green Isn't Your Color.

Photo Finish heavily resembles the iconic editor-in-chief of Vogue magazine, Anna Wintour. Her name is a play on a horse racing term; a "photo finish" is when competitors finish so closely that a photograph is needed to determine the winner. Tabitha St. Germain based Photo Finish's accent and mannerism on that of an Austrian woman.[2]

Photo Finish first appears in Green Isn't Your Color. She is first mentioned during the spa scene, where Rarity excitedly says that Photo Finish was impressed by some of her latest fashion attire. She soon appears in the Carousel Boutique where she holds a photo-shoot of Fluttershy, seemingly fascinated by the Pegasus' innocence and simplicity, rejecting any extra flair that the she had attempted at Rarity's insistence. Photo Finish launches Fluttershy into a modeling career instead of promoting Rarity's dresses, much to Rarity's disappointment. With Photo Finish as her manager, Fluttershy takes the modeling world by storm, but grows to hate her fame almost immediately, uncomfortable with the excessive attention focused on her and unhappy at having no time to spend with her friends. Twilight Sparkle tries to sabotage Fluttershy's latest photo shoot in order to get her out of her contract, much to Photo Finish's horror, but an accidental intervention on Rarity's part makes Fluttershy even more popular, and Photo Finish seeks to promote her more eagerly than ever. However, Fluttershy confesses her dislike of the spotlight to Rarity, and quits modeling altogether, much to Photo Finish's surprise and dismay.

Photo Finish also has two brief cameos in Sweet and Elite: she can be seen attending an art gallery in Canterlot during Rarity's song sequence, and once again when Rarity is surrounded by Canterlot ponies in a checkerboard-like sequence. In the same shot, members of Photo Finish's photography and makeup crew also appear.

She also has a cameo in the audience sitting with Hoity Toity and Sapphire Shores in Rarity Takes Manehattan.

She can be seen sitting in the stadium in Equestria Games.

She is listed as having a speaking role in the credits of Twilight's Kingdom - Part 2, although she ends up not having any lines. She has a cameo as one of the ponies seeing the Castle of Friendship during Let the Rainbow Remind You.

In reference to her appearance in the opening sequence, she appears at the end of Crusaders of the Lost Mark taking a photo of the Cutie Mark Crusaders and their friends. She is seen taking photos of Coloratura and the school ponies in The Mane Attraction.

In Honest Apple, Photo Finish serves as one of the judges in Rarity's fashion contest at Carousel Boutique. In It Isn't the Mane Thing About You, Rarity prepares for a magazine photoshoot with Photo Finish, but ends up cancelling due to her damaged mane. Photo Finish manages to take some clandestine photos of Rarity's new punk-inspired look for Vanity Mare.

In School Daze - Part 2, at the end of Friendship Always Wins, Photo Finish appears to take a photograph of the students and faculty of the School of Friendship. In Fake It 'Til You Make It, her silhouette appears in a shot visually re-used from Green Isn't Your Color.

In She's All Yak, Photo Finish appears during Fit Right In. In The Last Problem, she briefly appears in Rarity's group shot during The Magic of Friendship Grows.

Photo Finish appears in a flashback of Honest Apple with Applejack apologizing to the fashion contestants in Harvesting Memories.

In My Little Pony The Movie, Photo Finish appears several times taking photos at the Friendship Festival, including of Twilight Sparkle and of Songbird Serenade.

A Photo Finish miniature collectible is included in the Famous Friends Set with Hoity Toity and Rarity.[3] A brushable Photo Finish pony toy, a Toys "R" Us-exclusive in the Ponymania line, has been displayed at the 2014 American International Toy Fair.[4] The toy's packaging states regarding Photo Finish "She is ready for a fashion show! Who will be her next model?"

Photo Finish appears in episode 2 of Rarity's Peek Behind the Boutique, "Fashion vs. Function".

Photo Finish is a character in Gameloft's mobile game, and serves as a boss battle helper during the "Rarity's Retro Revolution" event. Her bio states, "This famous fashion photographer pony has an eye for modeling talent -- like Ponyville's very own Fluttershy!"

PHOTO FINISH catches all the hot looks as Equestria's top fashion photographer. This trendsetter keeps an army of impressionable attendants with her at all times.

With her German-like accent, Photo Finish joins the ranks of ponies with inexplicable foreign accents. She is quite posh, stuck up, and dismissive of ponies she deems unworthy of her time. She travels with an entourage of servile ponies who never speak and who cater to her every whim, doing things like carrying her around and vanishing the moment she tells them to leave. She often refers to herself as "I, Photo Finish," and she is almost never seen without her sunglasses on, briefly removing them for the first time in Honest Apple.

Beginning with Princess Twilight Sparkle - Part 1, she is added to the intro near the end group shot.

"I, Photo Finish... have arrived."
— Green Isn't Your Color and Honest Apple

"Flootershy! It is time to make... da magicks!"
— Green Isn't Your Color

"Even her schneezes are graceful!"
— Green Isn't Your Color

"You! The poise. The masculine grace you had on that float. I must photograph you."
— Friendship is Magic Issue #10 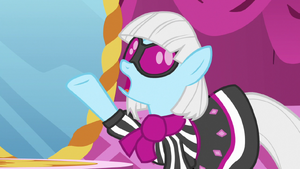