Photo Finish's human counterpart appears in the My Little Pony Equestria Girls franchise. She is a student at Canterlot High School and lead singer for the band "Photo Finish and the Snapshots".

In My Little Pony Equestria Girls: Rainbow Rocks, Photo Finish appears during Better Than Ever taking pictures of Big McIntosh, the Cutie Mark Crusaders, Snips, Snails, and Trixie near the statue in front of the school. She also appears at the beginning of Battle having lunch with another student as the Dazzlings enter.

Photo Finish takes part in the Battle of the Bands as the lead in her own band, "Photo Finish and the Snapshots", which consists of fellow fashionistas Violet Blurr and Pixel Pizzaz. They triumph over the Diamond Dog boys, but they are eliminated by the Dazzlings. During the Rainbooms' performance of Shake Your Tail, she and her bandmates attempt to sabotage the performance by lifting Rarity's metal fringes from her dress with magnets. She has one speaking line in the film.

In My Little Pony Equestria Girls: Friendship Games, Photo Finish appears at various times taking photographs. At one point in the film, she appears in her Battle of the Bands attire from Rainbow Rocks.

Photo Finish is the lead role in the Friendship Games animated short Photo Finished, in which she is tasked by Vice Principal Luna to take student photos for the school yearbook. Though Photo Finish, assisted by Violet Blurr and Pixel Pizzaz, gets carried away and annoys the subjects of her photography, the pictures she submits are met with Vice Principal Luna's approval.

In A Photo Booth Story, which takes place during the Fall Formal in the first film, Photo Finish acts as the dance photographer, but gets a little carried away when it comes to taking a photo of the Equestria Girls.

In the Better Together short Queen of Clubs, Photo Finish takes pictures for the Canterlot High School yearbook.

In the season two short Schedule Swap, Photo Finish is briefly seen at drama class and later has lunch in the CHS cafeteria.

Photo Finish is a possible ending of the Choose Your Own Ending short Constructive Criticism, in which she, Violet Blurr, and Pixel Pizzaz help Applejack assemble a stage set for the school play using cameras and lasers.

In Rollercoaster of Friendship, Photo Finish briefly appears at Equestria Land taking a picture of Vignette Valencia and her fans.

In "Dashing Through the Mall", Photo Finish appears in a line to a gaming store in the Mall and later appears on the mall's second floor across from Violet Blurr and Pixel Pizzaz. In "O Come, All Ye Squashful", she appears as the photographer for the Equestria Girls' theme photoshoot in the school auditorium.

In the My Little Pony Annual 2013, Photo Finish appears on page 13 taking a picture of Applejack, Rarity, Rainbow Dash, Fluttershy, and Pinkie Pie during the Freshman Fair.

A talented photographer, Photo Finish attends school at Canterlot High. She's a little over the top, but her artistic eye turns the school's best moments into everlasting memories on film. Whatever the subject, Photo Finish captures the magic![1]

A Equestria Girls doll of Photo Finish, together with dolls of Violet Blurr and Pixel Pizzaz, has been displayed at the 2014 American International Toy Fair[2] and released in a Toys "R" Us-exclusive Ponymania "Photo Finish & the Snapshots" 3-pack, packaging of which names them with trademark symbols and gives them the description "They show off their rockin' style for the cameras!"

Two other Photo Finish dolls have also been released for My Little Pony Equestria Girls: Friendship Games: an Amazon-exclusive single release and one that is included in the School Lockers Playset.

In some merchandise, Photo Finish is depicted with Twilight Sparkle's cutie mark on her cheek. In other merchandise, it is replaced with a camera's black and pink aperture blades.

"I have arrived! It's me, Photo Finish. Now, let's get ready for a photo sesh!"
— Equestria Girls mobile app 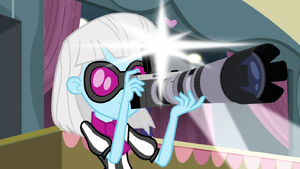 Retrieved from "https://mlp.fandom.com/wiki/Photo_Finish_(EG)?oldid=2153319"
Community content is available under CC-BY-SA unless otherwise noted.