Piña Colada is the placeholder name of a filly Earth pony with a pale pink coat color, a pink mane, and teal eyes. She is seen in several episodes engaging in activities with other foals. In Call of the Cutie, she is seen with many cutie marks, including a cupcake, a palm tree on an island, and an apple core. However, in other episodes she has no cutie mark. Piña Colada shares her design with "Noi" and Aura.

Piña Colada appears next to Twinkleshine in both versions of the show's intro sequence. In the first version, they appear on the left side of the scene with Piña to the right. In the second version, they are on the train platform with Piña on the left. They also briefly appear next to each other at town hall in Friendship is Magic, part 1 and at the bowling alley in The Cutie Pox.

Piña Colada's first in-show appearance is in Friendship is Magic, part 1 at the Summer Sun Celebration. In Call of the Cutie, she appears in Cheerilee's class with a cupcake cutie mark and later at Diamond Tiara's party with a palm tree on an island and an apple core for cutie marks. At one point, there are two versions of her on opposite sides of the room, shown in successive shots. She and Liza Doolots move away from a table when Scootaloo and Sweetie Belle defend Apple Bloom. In The Cutie Mark Chronicles, Piña Colada appears with wings in Rainbow Dash's flashback.

Piña Colada appears in Twilight Sparkle's vision of magic kindergarten in Lesson Zero with a unicorn horn. She later appears in the same episode playing with "Noi" and "Ruby Pinch". She dresses as a ladybug in Luna Eclipsed, and Twilight gives her candy along with "Noi" and "Princess Erroria". She also competes and wins alongside Berryshine in Sisterhooves Social, where she is wearing a white T-shirt. Piña Colada appears in The Cutie Pox watching Apple Bloom perform. Piña appears in parts of the second meeting of the Rainbow Dash fan club in The Mysterious Mare Do Well and poses with her for a picture, again accompanied by "Noi" and "Princess Erroria". In The Super Speedy Cider Squeezy 6000, Piña Colada appears between Dr. Hooves and "Tornado Bolt" gathering around Flim and Flam's machine. In A Friend in Deed, Piña Colada appears jumping rope with Pinkie Pie, Scootaloo, "Dinky Doo", and "Tornado Bolt". She later appears in Ponyville Confidential.

Piña Colada appears at the Summer Harvest Parade in One Bad Apple. In Games Ponies Play, she appears on the Friendship Express train to the Crystal Empire with Screwy. In Magical Mystery Cure, Piña Colada appears between "Noi" and Lyra Heartstrings during Twilight's coronation.

Piña Colada appears in Slice of Life among various other background ponies in front of the Ponyville Bowling Alley. In Party Pooped, she makes a background appearance in Ponyville with Neon Lights. In Brotherhooves Social, she takes part in the Sisterhooves Social with Berryshine again. In Crusaders of the Lost Mark, she appears at the Ponyville Schoolhouse during The Vote for Student Pony President and later watches as Diamond Tiara brings new playground equipment. In The One Where Pinkie Pie Knows, she appears leaving the Ponyville Schoolhouse with Tornado Bolt.

In Forever Filly, Piña Colada makes background appearances in the audience for Claude's puppet show and in the line for Twisty Pop's balloon animals. In Parental Glideance, she appears in the audience for a Wonderbolts show in Canterlot. In Not Asking for Trouble, she appears walking in front of Sugarcube Corner with Lily Valley as they hear Pinkie Pie's sudden outburst. In Fame and Misfortune, she appears in the line of foals at the Ponyville Schoolhouse to receive a copy of the Friendship Journal from Twilight Sparkle and subsequently eating at Sweet Apple Acres as one of the Sweet Apple Admirers.

In The Maud Couple, Piña Colada appears running in a Ponyville street with Princess Erroria. In Yakity-Sax, she appears in a wide shot of Ponyville, also running through the town with Princess Erroria. In The Washouts, she makes a background appearance talking to Sunshower Raindrops in Ponyville, and subsequently appears in the audience for both of the titular group's two shows in Ponyville.

In 2, 4, 6, Greaaat, Piña Colada appears in the audience for the halftime cheerleading routine during the buckball game between the School of Friendship and the School of Magic.

In My Little Pony/Transformers Issue #4, Piña Colada is summoned to Sweet Apple Acres by Discord to help Applejack drive the Insecticons off the farm.

On Enterplay trading card series 2 card #37, she, Minuette, and DJ Pon-3 are grouped with Berry Punch. 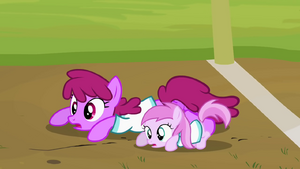