Pinkie Apple Pie[3] (misspelled as Pinky Apple Pie in the opening credits, but fixed for Netflix) is the ninth episode of season four of My Little Pony Friendship is Magic and the seventy-fourth episode overall.

In this episode, Pinkie Pie joins Applejack, Apple Bloom, Big McIntosh, and Granny Smith on a trip to find out whether or not she is Applejack's cousin.

On April 1, 2013, Meghan McCarthy wrote as part of an April Fools' Day joke that the seventh episode of the fourth season would be titled "Pinkie Apple Pie" and be part of a season mini-arc in which Pinkie Pie becomes the Princess of Pie.[4]

On July 20, 2013, an animatic clip of this episode, consisting of the song Apples to the Core, was shown at San Diego Comic-Con International. In the clip, Apple Bloom, Applejack, Big McIntosh, Granny Smith, and Pinkie Pie appear.[5][6]

For his work in this episode as both Big Mac and Goldie Delicious, Peter New was nominated for a UBCP/ACTRA Award for Best Voice in 2014.[7]

The episode opens at the Golden Oak Library, where Twilight Sparkle is reading through some books. Pinkie Pie pops in from behind a book on a shelf and wonders what she's doing. Twilight explains she's doing some genealogical research, and Spike specifies to Pinkie that genealogy is the study of one's family history. Interested, Pinkie picks up a scroll and looks through it, making a shocking discovery about who she's related to.

The two friends later bring this news to the attention of Apple Bloom, Big McIntosh, and Granny Smith, who are all equally as excited as Applejack about the development. However, when Applejack takes a closer look at the genealogy scroll, she notices a smudge where it says Auntie Applesauce of the Apple family is a fourth cousin twice removed of the Pie family; whether Applejack and Pinkie Pie are related or not is still unclear. To find out for sure, Granny Smith suggests paying a visit to Goldie Delicious, whose cabin is "practically an Apple family history museum!"

Big McIntosh prepares a wagon for the trip, packing all manner of things on it. With Pinkie Pie away doing her own packing, Applejack gathers her folks around her and asks them to show Pinkie only the positive side of their family. As Pinkie returns with a saddlebag, Applejack briefly pesters Big McIntosh when she asks if all the things he packed are necessary and whether the wagon's strong enough to hold it all.

Upon setting out for the open road, Pinkie Pie and the Apples sing a light song about family. As soon as the song ends, the wagon collapses. Applejack nearly gets upset with Big Mac about the wagon, but restrains herself with Pinkie nearby. When Apple Bloom and Granny Smith discuss their options, Pinkie Pie suggests turning the family road trip into a family river trip. Without a proper raft (which Applejack mentions is the only thing Big Mac didn't pack), the Apples construct one from the wagon's remains and tree sap. Pinkie Pie also starts taking photographs for a scrapbook. With that, the ponies set off down the river.

When Applejack sees the river splitting off in three different directions, she asks for the map. Apple Bloom fetches it, but quickly loses it when it falls overboard and a fish snatches and makes off with it (and an eagle swoops down to grab said fish). Applejack and Big Mac become annoyed with Apple Bloom for losing the map, but they still force a smile for Pinkie Pie's sake.

The wise Granny Smith decides to take the reins, steering the raft down what she believes to be the correct path. Unfortunately, the path leads the raft—and the ponies on it—through the "scariest cave in Equestria..."

...causing the Apple siblings to become annoyed with Granny's questionable directions. Applejack attempts to take over steering the raft, and she and Granny Smith get into a light argument. Apple Bloom and Big Mac get dragged into it, and their bickering causes them to lose the raft's steering wheel. As tensions rise among the Apples, Pinkie Pie remains blissfully upbeat and oblivious—just as the raft goes careening over a steep waterfall.

An Apple to the core

With the raft destroyed, Pinkie Pie and the weary Apples trek the rest of the way to Goldie Delicious' cabin on hoof. A note on the cabin's front door states that Goldie is away doing errands. While they wait for Goldie to return, Pinkie goes off to get more scrapbook paper. Applejack, Apple Bloom, Big Mac, and Granny Smith exchange apologies for their behavior during the trip and understand if Pinkie Pie doesn't want to consider herself part of the Apple family. Pinkie Pie returns and, having heard the Apples talking, states that their closeness as a family helped them make amends; knowing that, she wants to be an Apple more than ever.

At that moment, Goldie Delicious returns from her errands. After Applejack informs her of their situation, Goldie agrees to help solve the mystery. However, when she looks through the record of the Apple family tree, she finds a smudged page. Pinkie is disappointed that the mystery of her genealogy remains unsolved, but Applejack assures her that, after everything they've been through, she's an "Apple to the core!" Apple Bloom, Big Mac, and Granny Smith are in complete agreement, and Pinkie Pie meets them for a group hug/photo.

With a new wagon courtesy of Goldie Delicious, Pinkie Pie and the Apples return to Ponyville, singing a reprise of their earlier song.

Upon the ponies' return to Sweet Apple Acres, Applejack and Pinkie Pie are about to write about their latest lesson in the friendship journal, but Applejack gets into an argument with Apple Bloom, Big Mac, and Granny Smith over who should write it. As an honorary member of the Apple family, Pinkie Pie happily joins in the arguing.

Apple Bloom: Who's got the map?

I got the map!
M to the A to the yeah, that's right, P
Ain't no other pony found a map like me
I'm Applel—

Applejack: Are you sure you know which way to go?
Granny Smith: Does a junebug like to hide in a tree?
Applejack: Uh, I don't know.

Apple Bloom: HEY! It wouldn't have been an overboard if Big Mac hadn't overpacked the jalopy.
Big Mac: Eeyu—Hey! 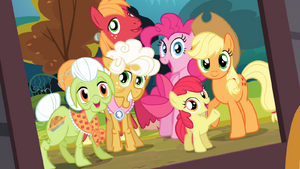 Retrieved from "https://mlp.fandom.com/wiki/Pinkie_Apple_Pie?oldid=2051521"
Community content is available under CC-BY-SA unless otherwise noted.