Pinkie Pride is the twelfth episode of the fourth season of My Little Pony Friendship is Magic and the seventy-seventh episode overall. In this episode, Pinkie Pie's plans for Rainbow Dash's "birth-iversary," as well as her reputation as a super duper party pony, are put in jeopardy when another party thrower comes to town.

This is the second musical episode, after the season three finale, with six songs.

A teaser for the episode was screened at San Diego Comic-Con 2013, where Mike Vogel said, "somebody will give [Pinkie] a run for her partying money."[3] It was also revealed at SDCC that this will be a musical episode and Amy Keating Rogers is writing this episode. Show director Jayson Thiessen initially approached "Weird Al" Yankovic to do a guest role on Friendship is Magic on Twitter in April 2011,[4] and Yankovic's appearance was further teased when Al met with score composer William Anderson, who used to play harmonica and other instruments in Al's band, in August 2012.[5] The live-action segment of Boneless the rubber chicken dancing during The Goof Off was filmed by Thiessen in his basement. The puppet was made of balloons and rice.[6] This is the second episode not to contain a score by Anderson after Magical Mystery Cure. Songwriter Daniel Ingram and orchestrator Steffan Andrews instead handled the score of this episode.[7][8] Even though Al provided his voice, he did not play the accordion on any of the songs. The accordion was played by Steffan Andrews.[9] According to Amy Keating Rogers, she finished the episode around late August to early September 2012.[10] Ingram and Andrews were nominated for a 2014 Leo Award for their work on this episode for "Best Musical Score in an Animation Program or Series".[11]

The Hub Network published a press release on December 23, 2013 which said the title of this episode would be "Three's a Crowd", but on the 26th it corrected the information and stated Three's A Crowd is a different episode altogether. The episode is labeled as the eleventh episode on iTunes and Google Play, with Google Play listing the date of this episode identical to Three's A Crowd.[12][13] The episode was released on Google Play several hours prior to its airing on the Hub Network.

The episode opens just outside Appleloosa, where the ponies and buffalo are seen having a huge party. A short distance away from the town, a stallion in a cowboy hat and poncho converses with a rubber chicken he calls Boneless. A wobbling in the stallion's joints causes his hat to fly off. As he puts it back on, he remarks that his next destination is Ponyville.

Pinkie Pie makes her way through Ponyville collecting supplies for a party, including streamers, paint, and a banner while she and the ponies around her sing a merry tune about her party-throwing abilities. In front of Sugarcube Corner, Pinkie's banner is put up as she expresses excitement about planning Rainbow Dash's birthday party. Pinkie even makes a "Pinkie Party Promise" to Rainbow that her party will be one to remember.

At that moment, the poncho-wearing stallion appears before the ponies and introduces himself as Cheese Sandwich, Equestria's premiere party planner. With two party ponies in one place, Rainbow Dash proposes they work together to make her "birth-iversary"—her birthday and the anniversary of when she first moved to Ponyville—epic. Pinkie Pie agrees, and so does Cheese Sandwich, breaking into song and leading the ponies around him in celebration. At the song's climax, Pinkie notices that everyone is more excited about Cheese Sandwich's partying style than hers, outright ignoring her.

A new party pony in town

At Cheese Sandwich's direction, a great birth-iversary bash is organized, complete with a stage. Meanwhile, Pinkie Pie sits alone in front of Sugarcube Corner. When Twilight walks by wondering why Pinkie isn't helping with the party efforts, Pinkie waves off Twilight's concerns, saying Cheese Sandwich has everything handled on his own.

"After all, if Cheese really is the super duperiest partying-est pony of them all, maybe that means... I'm... not."
— Pinkie Pie

Pinkie Pie takes a walk through Ponyville and sings of her troubles and identity crisis. Believing that she's been replaced as Ponyville's number-one party planner, she tries her hoof at various other tasks, like surgery, mail delivery, and construction, but performs poorly at all of them. As Pinkie retires her party cannon and other partying supplies and returns home, she sees photographs on her wall of her parties capturing the joy she's brought other ponies through them. With new determination, Pinkie decides to take back her title as premiere party pony and show everyone that she's the "bestest party pony around".

As Cheese Sandwich puts the finishing touches on Rainbow Dash's party, Pinkie Pie appears and challenges him to a goof off, the winner of which will headline Rainbow Dash's party and be recognized as the ultimate party pony. Confident in his own goofing skills, Cheese accepts the challenge.

The ponies of Ponyville gather to watch Pinkie Pie and Cheese Sandwich's showdown, and Twilight explains the rules. Rainbow Dash is selected as the judge of the competition, and Pinkie and Cheese demonstrate their goofing prowess and use every tool in their respective repertoires to make complete clowns of themselves, each attempting to outperform the other.

When a giant piñata falls onto Rainbow Dash, six streamers in the colors of the Mane Six's coats fall, and Pinkie's eyes shimmer with an aura of the same colors. She realizes that Rainbow Dash isn't having fun and that she has broken her Pinkie Party Promise. She calls off the goof-off, forfeiting to Cheese Sandwich.

The magic of laughter

Outside Ponyville, Pinkie Pie packs up her belongings and gets ready to leave. Her friends stop her and apologize for brushing her aside in favor of Cheese Sandwich. Pinkie apologizes in return for letting her pride get in the way of Rainbow Dash's party fun. As she acknowledges Cheese as the superior party pony, Rainbow and the others tell her that, as great of a guest party pony Cheese is, Pinkie Pie is Ponyville's permanent party pony and no one could ever take her place.

A remorseful Cheese Sandwich then enters and explains he never meant to take Pinkie's place in Ponyville; all he wanted was to show her what a great party pony he was. He confesses that he wasn't always the party pony he is now and that as a colt, he was extremely shy and no one even knew his name. He had stumbled into Ponyville one day during the greatest party he'd ever seen, inspiring him to become a super duper party pony, and the pony who had thrown that party was none other than Pinkie Pie herself.

As Pinkie Pie realizes how much of an impact she had on Cheese Sandwich's life, the two patch things up and combine their efforts to make Rainbow Dash's birth-iversary party truly memorable.

Later, as the party winds down, Rainbow Dash thanks Cheese Sandwich for the epic party, and a satisfied Cheese is ready to move on, donning his cowboy hat and poncho. Before he says goodbye, he gives Boneless, his rubber chicken companion, to Pinkie Pie—it briefly gives off a rainbow-colored glow. With a second rubber chicken ("Boneless 2") on his saddle, Cheese Sandwich leaves Ponyville, and the six friends watch him walk off into the sunset. Pinkie jokingly states that she never got his name, and her friends reaffirm her that it's Cheese Sandwich.

Cheese Sandwich: I happen to be the premiere party planner in all of Equestria. If there's a party in need, there I'll be. Be it wingding, hoedown, hootenanny, or shindig, I'm your pony.

Rainbow Dash: I'll tell you what -- making this party epic! 'Cause this isn't just any birthday. It's also the anniversary of when I moved to Ponyville!
Rarity: Good heavens, Rainbow Dash. It's your "birth-iversary"!

Cheese Sandwich: This Cheese has stood alone for a long time, Pinkie Pie.

Pinkie Pie: So are you in, Cheese? Or are you... boneless?
Cheese Sandwich: Nopony calls me boneless! Right, Boneless?
Pinkie Pie: Then the goof off is on for high noon!
Twilight Sparkle: Um, Pinkie? It's already 3 o'clock.
Pinkie Pie: Oh. Oh, well then. Make it 3:10 to goof off!

Twilight Sparkle: All right, everypony. According to my official goof off rulebook...
Rainbow Dash: She actually has a goof off rulebook?
Spike: Are you kidding? Twilight can find a rulebook for everything!

Pinkie Pie: You're giving me your special rubber chicken friend?
Cheese Sandwich: Oh, he's not the only one. 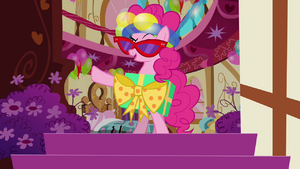