The Good, The Bad and The Cheesy

A rubber chicken for a ride partner.

Cheese walking away from Appleloosa.

Did you feel that?

His cutie mark has a mind of its own.

"That was a doozy!" (He must have cheesy scence)

Now where was I?

Dat Clint Eastwood moment!
Add a photo to this gallery

Another day in Ponyville...

Do you know who planned it?

Is that even physically possible?

"Today I planned a party"

Looks like Twilight's OCD has rubbed off on Pinkie.

Who's pushing that baby carriage?

Silver Spoon with her chocolate milkshake.

Chocolate is soo in this season.

Looks as if Silver Spoon hates Diamond Tiara just as much as we do.

Not sure what to think of Diamond Tiara's compliment.

He's just pouring them in?

Twilight and Rarity, helping Pinkie with her banner.

A wonderful way to end an amazing song.
Add a photo to this gallery

Wow, that drawing of Rainbow Dash is so accurate!

So, Dashie, how long have you been holding that pose?

by enlisting me as your party planner.

"Parties are no picnic!"

Cross my heart, hope to fly...

Pinkie literally stuck a cupcake in her eye! She said she would.

Now hold on a second there.

I am the pony with no name... Cheese Sandwich at your service.

"Oh, it's no coincidence, My Little Pony."

"My cheesy sense was a-tinglin'."

"I have a Pinkie Sense!"

"Who here likes to party?"

Wait a minute is that a flying pig? Well, now I've seen everything.

Interesting moves you got there Cheese...

This cake has the number 5 on top of it.

Anyone else want a cake head?

"Tired of snacks made by your mom?"

"How about a giant party bomb?"

Everypony on the dance floor!

Is the hippo Hungry Hungry?

Cheese wants to show Pinkie what a great party pony he is but gets "carried away".

Aww, Pinkie. Go join them!
Add a photo to this gallery

"Now that's what I'm talking about!"

Um, Pinkie, the plants are to your right.

Good tip: In order to fake happiness, it's best to show all 32 while you're talking.

Those ripples in the water! Something about them!

ECG devices but no electric lights?

That (pretty) cupcake! Something about it!

Never send a Pinkie to do a Derpy's job.

Those streamers! Something about them!

Those balloons! Uh, every six of them are the wrong shade.

Callback from The Cutie Mark Chronicles

Callback from Friendship is Magic, part 1.

Callback from Party of One

Callback from A Canterlot Wedding - Part 2

Here I stand, in the light of day.

Pinkie Pie's gonna show Cheese, that there's only one party pony in Ponyville!
Add a photo to this gallery

Challenging Cheese to a goof-off

Don't mind me. I'm just standing here minding my own business not being tempted by that fountain in front of me.

Derpy enjoying the chocolate fountainy goodness. (Oh, and Tank's back, too.)

Things just got intense! ...I think.

"The goof-off is set for high noon!"

How did Pinkie develop that bowlegged horse-riding gait?

"She actually has a goof-off rulebook?"

"Are you kidding? Twilight can find a rulebook for everything!"

Tuba mouse is out, PEACE!

"Big tense competition on my birth-iversary."

"What could be better?"

"I was ready before I was born!"

Pinkie's mustache obsession is back.

Roll out the barrel...We'll have a barrel of fun!

Pinkie does not approve of the giant cheese wheel.

Cheese doesn't have any bones either!

Oh, look I caught me a live one!

In the background, Derpy is deeply engaged in a staring contest with Boneless.

Gummy is....doing nothing, as usual.

Oh no, is it going to be Twiliscepter all over again?

Rainbow Dash is a cheesehead.

"I have no idea what you're talking about."

Of course, you realize, this means war!

Whoa! She's got a cannon!

How much candy could you fit into that pinata?

The pelican from Cheese's cannon causes the piñata to fall.

That seemed less painful than it should've been (notice the confetti's rainbow colors).

The true meaning of laughter...

"But I haven't named a winner!"

"What about you, Pinkie Pie?"

Pinkie, wait up for us.

"I'm sorry I got all swept away by Cheese Sandwich."

We're all sorry, too.

"He'll be a terrific headliner."

Manehattan, where your dreams die.

"I stumbled into Ponyville one afternoon by chance."

Sweetie Drops rocking the blue glasses as a filly.

Ooh! That's gotta... actually, that didn't hurt at all.

Map of where Cheese Sandwich has partied.

More than enough postage to ship itself.

"Me?"
Add a photo to this gallery

They make a cute couple!

"and you gotta throw me a bash!"

Ah ha, the fun has been doubled!

That is probably not hygienic.

"Who's ready to get their party on?"

Do those candles represent Rainbow's age? If so, she's 21!!

Why does Rarity have (alicorn) wings?

For once, she actually shielded her eyes!

"Another town, another party."

"I never did get that pony's name."

The Ultimate Party Face-Off is about to begin. 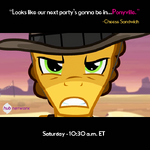 My name is Sandwich, Cheese Sandwich.
Add a photo to this gallery
Retrieved from "https://mlp.fandom.com/wiki/Pinkie_Pride/Gallery?oldid=2195218"
Community content is available under CC-BY-SA unless otherwise noted.