For the ponies addressed as "Pipsqueak" by Rainbow Dash and Rarity respectively in Owl's Well That Ends Well and in Manehattan Mysteries, see Scootaloo and List of comic ponies#Issue22Unnamed Diamond Salespony.

Pipsqueak, also called Pip Squeak or Pip, is a young male Earth pony from Trottingham who first appears in Luna Eclipsed. He later appears in various episodes and the IDW comics. He is called Pip Pinto Squeak in some merchandise.

As his name suggests, Pipsqueak is smaller than the other ponies. His coat has patches of color on it, unlike most ponies in the show who have a solid-color coat. The equestrian term for a light coat with dark patches is pinto pattern; a show layout artist has stated that Pipsqueak is a pinto colt. Page 66 of the UK-published Ultimate Guide: All the Fun, Facts and Magic of My Little Pony identifies Pipsqueak as a skewbald pony.

His name is spelled as "Pip Squeak" in the credits of the episodes Twilight Time and Crusaders of the Lost Mark, in Little, Brown's guidebook The Elements of Harmony, and in Gameloft's promotional material;[2][3] as "Pipsqueak" with a trademark symbol on Enterplay's trading card of him, in software including Gameloft's mobile game and the Hub Network's online game Equestrivia Challenge,[4] in Enterplay's collectible card game, and in a post by Hasbro's My Little Pony Facebook page;[5] and as "Pipsqueak," "Pip Squeak," and "Pipsqueek" in a show layout artist's different statements. His name seems to be based on the character Pip from the famous novel "Great Expectations" by English novelist Charles Dickens.

In the series, Pipsqueak first appears in Luna Eclipsed, collecting candy with a group of ponies, at Twilight Sparkle's library, wearing a pirate costume. During his first scene he speaks with a Cockney accent, but he drops the accent in later scenes. When he states it is his first Nightmare Night, Twilight asks if he means the first since he moved to Ponyville from Trottingham, and he replies that it is his first ever.

Pipsqueak joins a group of fillies chaperoned by Pinkie Pie, which follows Zecora while she tells the story of Nightmare Moon. When Princess Luna appears, he gets scared and dumps his candy in front of Nightmare Moon's statue along with the rest of the group and they all run off. The other time he is shown is when Princess Luna saves him when he falls into Applejack's water apple barrel. He is startled when Pinkie Pie says the Princess would "gobble" him and instantly runs off again. At the end of the episode, after he and several other ponies are playfully frightened by Princess Luna, he comes up to her and states that she is his favorite princess and hopes she can visit again next year.

He briefly makes a background cameo running across the marketplace in Putting Your Hoof Down.

Pipsqueak makes a return in Twilight Time, where he regains his Cockney accent. He and the other foals in his class begin doing favors for the Cutie Mark Crusaders after learning of their private lessons with Princess Twilight. Near the end, he says he would like to "learn to be a Cutie Mark Crusader" and become her friend just so he can get his classmates to do favors for him, making Twilight believe this to be the Crusaders' reason for their private lessons. In response for "[getting them] into this mess," Scootaloo takes apart his scooter to use for a failed demonstration of Twilight's lessons to prove they genuinely wanted to learn from her. When Diamond Tiara and Silver Spoon tease the Crusaders for taking advantage of Twilight, he and the other foals follow suit, only to be reprimanded and dismissed by the princess, who states they have done no differently.

In Crusaders of the Lost Mark, Pipsqueak runs for class president and enlists the Cutie Mark Crusaders to be his campaign managers. Being a more ethical candidate than Diamond Tiara, Pipsqueak wins the election, but his request for new playground equipment is denied by the school board because there wasn't enough money in the budget. After Diamond Tiara has money donated to the school, she and Pipsqueak end up on much friendlier terms.

Pip also makes a background appearance in The One Where Pinkie Pie Knows, running outside Sugarcube Corner.

Pipsqueak, along with the rest of the school ponies, meets Coloratura in The Mane Attraction. He also appears in the final group shot during Friends Are Always There For You in The Cutie Re-Mark - Part 2.

In Forever Filly, a picture of Pipsqueak appears on a wall in the Crusaders' clubhouse alongside pictures of other ponies whose cutie mark problems they helped with. In Parental Glideance, he appears during Scootaloo's presentation.

In Marks and Recreation, he appears as one of the campers at the Cutie Mark Crusaders' Cutie Mark Day Camp. Like the others, he is briefly swayed by Rumble's anti-cutie mark beliefs, but grows bored when Rumble insists they do nothing in order to avoid discovering a special talent.

In The Break Up Break Down, Pipsqueak is one of the possible candidates that the Crusaders consider for Sweetie Belle's secret admirer. In Marks for Effort, Pipsqueak loses his kite in a tree, and Cozy Glow retrieves it for him.

In She's All Yak, Pipsqueak appears in the reused image from the end of The Cutie Re-Mark - Part 2 during Fit Right In. In The Last Crusade, he appears during Cutie Mark Crusader Appreciation Day.

In The Ending of the End - Part 2, Pipsqueak appears taking shelter with other Earth ponies as Ponyville closes itself off from the other pony races. In The Last Problem, Pipsqueak briefly appears in Pinkie Pie's group shot during The Magic of Friendship Grows.

Pipsqueak being startled by Pinkie Pie in Luna Eclipsed briefly appears in Cakes for the Memories. The scene of him from the same episode bringing candy to Nightmare Moon's statue and praising Luna also appears in Memories and More.

Pipsqueak appears in Nightmare Night, and in a photograph in The Magic of Friendship.

Pipsqueak is a young Earth pony who hails from Trottingham.

PIP SQUEAK, or "Pip" to his friends, is an Earth Pony from Trottingham, while FEATHERWEIGHT is a Pegasus pony as well as the editor in chief of the Foal Free Press newspaper.

PIPSQUEAK is president of his class at the Ponyville Schoolhouse. It's an honor he always dreamed of achieving. The Cutie Mark Crusaders helped him run a fierce election campaign. Pip sure has come a long way since his early days in Trottingham. Go, Pip, go!

Prior to his series debut, Pipsqueak first appeared on the Comic Con 2011 poster. He can be seen in the Twinkling Balloon in the background.[6]

In the Canterlot Nights expansion set of Enterplay's collectible card game, card #16 R of Pipsqueak lists the quote "I wanted a real Red Rider sword for my birthday, but mum said I'd put my eye out."

In the Equestrian Odysseys expansion set, card #47 C of Pipsqueak attributes to him and Scootaloo the respective quotes "So their chins were wagging, right? And I heard my mum having a bubble bath about something, so I went on up the apples and pears to find out what's what!" and "I literally have no idea what you just said."

In the Marks in Time expansion set, card #9 U of Pipsqueak lists the quote "When I'm elected, we'll build a wall around the playground, and the school board will pay for it!"

A mini-figure toy of Pip Pinto Squeak in his Nightmare Night costume is packaged in one of four Small Story Packs as part of the third wave of the Friendship is Magic Collection.[7]

"Whoa! You're my favorite princess ever! She said yes, guys!"
— Luna Eclipsed

"I want to learn how to become a Cutie Mark Crusader...Because then I could get all my classmates to do me favors and stuff because I'm friends with a famous princess!"
— Twilight Time

"Our playground equipment took quite a beating during Twilight's battle with Tirek! If I'm voted in as student pony president, I'll go to the school board and right this wrong!"
— Crusaders of the Lost Mark

"I wanted a real Red Rider sword for my birthday, but mum said I'd put my eye out."
— Enterplay collectible card game Canterlot Nights #16 R card of Pipsqueak

"So their chins were wagging, right? And I heard my mum having a bubble bath about something, so I went on up the apples and pears to find out what's what!"
— Enterplay collectible card game Equestrian Odysseys #47 C card of Pipsqueak

"When I'm elected, we'll build a wall around the playground, and the school board will pay for it!"
— Enterplay collectible card game Marks in Time #9 U card of Pipsqueak 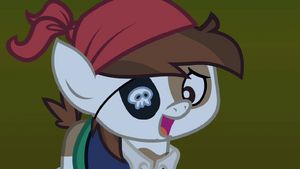