Pizzelle, or Pizelle, is a female background Pegasus pony with a yellowish white coat, golden mane and tail, lime green or light cyan eyes, and a cutie mark sometimes of three cookies, one with a bite taken out of it, and sometimes of two feathers. She is unnamed in the series, but she is named in other media and merchandise.

She is named after pizzelle.

Pizzelle first appears in the season three episode Wonderbolts Academy as a Wonderbolts cadet and wingpony to Stormfeather. When she watches Rainbow Dash save her friends from falling out of the sky, she has a slightly different mane style than usual.

In season four, Pizzelle appears at the beginning of Simple Ways as an applicant for Ponyville Days pony of ceremonies, once again wearing her Wonderbolts cadet uniform. She also appears, out of uniform, in Equestria Games participating in the Games' ice archery event.

In season six, Pizzelle appears at the Wonderbolt Academy in Top Bolt.

In My Little Pony Best Gift Ever, Pizzelle appears during One More Day.

In season nine, Pizzelle appears in She's All Yak, with a brief speaking role on the School of Friendship buckball team in 2, 4, 6, Greaaat, in A Horse Shoe-In, in Daring Doubt, and in Growing Up is Hard to Do.

Pizzelle appears on My Little Pony: Feats of Friendship Issue #1 page 1. In My Little Pony: Generations Issue #2, in which Pizzelle is addressed and referred to by name, Smolder and Ocellus prank her by making an illusion of a fearsome monster in her bedroom in accordance with new teacher Violet Shiver's school lessons.

Pizzelle appears in a picture with her name listed on page 175 of The Wonderbolts Academy Handbook.

Pizzelle, under the name "Open Friendship Student", is a character in Gameloft's mobile game.

In the Crystal Games expansion set of Enterplay's collectible card game, card #105 R, Ice Archery, depicts Pizzelle as she appears in Equestria Games. Pizelle[sic] appears with her name listed on page 141 of the Ultimate Guide published by Orchard Books in the United Kingdom.

"Monster! Monster! HELP! How do you have so many teeth!"
— My Little Pony: Generations Issue #2 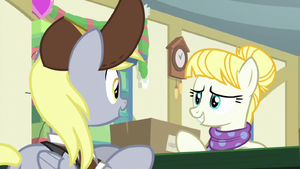