Start a Wiki
Plunderseeds are magical seeds that grow into malignant roots and vines in the season four premiere, acting as the primary threat. The vines smother the Tree of Harmony, overrun the Everfree Forest, and invade Ponyville.

In Canterlot, a black vine breaks through the floor and seizes Princess Celestia's hoof, catching the princess off guard. The next morning, both Celestia and Princess Luna are missing.

The next appearance of the vines is in Ponyville. At her cottage, Fluttershy wonders why her pets and animal friends seem to be terrified by something. She opens the door and is terrified by the sight of black thorny vines snaking out of the Everfree Forest. At Sweet Apple Acres, Applejack, Big McIntosh, Apple Bloom, and Granny Smith unsuccessfully try to pull out the strange vines, which they think are weeds. In the skies above the town, Rainbow Dash encounters a strange phenomenon: spiky black clouds. At Carousel Boutique, the vines' light blue-tinted magic interferes with Rarity's unicorn magic and wreaks havoc in the shop.

After witnessing flashbacks to the time of Discord's rule and his defeat by the regal sisters, Twilight Sparkle reasons that the vine invasion has to do with the Tree of Harmony, located deep in the Everfree Forest. Wearing their Elements of Harmony, Twilight and her friends enter the forest in hopes of saving the tree. However, after a dangerous encounter with a cragadile, the friends tell Twilight to turn back because they can't afford to lose another princess. Spike follows her back.

Discord makes Twilight feel guilty for leaving her friends in danger, and she and Spike go back into the forest. Spike goes ahead to look for the friends, while Twilight is surrounded by large crab-like flowers which spew a gas that puts her to sleep. As one of the flowers is about to close its jaws on her, Applejack shows up and lassos the flower shut. The rest of Twilight's friends come to the rescue and tie up the aggressive flowers. One more tries to attack Pinkie Pie, but Twilight destroys it with a magic beam. The ponies reach the Tree of Harmony, blackened and covered with the black vines. Twilight flies up to the tree with the Elements of Harmony to restore them, but the vines put up a fight and try to smother Twilight. However, the elements reattach to the tree, and the restored tree emits a powerful magic that destroys the vines and frees Princess Celestia and Princess Luna.

At the end of the episode, Discord reveals himself as the one who planted the plunderseeds moments before his initial defeat by Celestia and Luna, intent on using them to steal the Tree of Harmony and capture the royal sisters. He states that the seeds should have sprouted "ages ago", and concludes that the tree had enough magic to keep them from carrying out their original purpose until now.

The plunderseed vines appear as removable obstacles in Gameloft's mobile game, and are alluded to in My Little Pony: Friendship is Magic Issue #68. 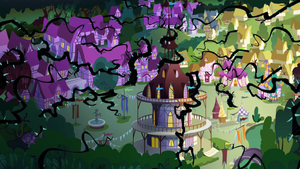 Retrieved from "https://mlp.fandom.com/wiki/Plunderseeds?oldid=2063007"
Community content is available under CC-BY-SA unless otherwise noted.