Ponet is the placeholder name of a male unicorn with a grayish-purple coat, dark goldenrod and pale yellow mane and tail, green eyes, and usually a cutie mark of a yellow star surrounded by multiple white five-pronged smaller stars. He is unnamed in the show and is called by the title Elite Pony in another depiction.

In mid-March 2011, Lauren Faust was asked "Hi Lauren, I have a question... Is everypony in the crowd in Show Stoppers [link]@ supposed supposed to have a 'blank flank', as in some sort of Easter Egg? Or was it a silly mistake" and answered "It was just an oversight. Wish I had a more interesting answer for you. Sorry."[1]

Ponet first appears at the Summer Sun Celebration in Friendship is Magic, part 1. In the very next episode, he is in the crowd welcoming Princess Luna to Ponyville. He also appears in Rainbow Dash's Grand Galloping Gala fantasy in The Ticket Master and attends Trixie's magic show in Boast Busters. In Call of the Cutie, he attempts to paint on a canvas, but Apple Bloom splats an apple on it, splattering Ponet with applesauce.

Ponet watches the Running of the Leaves in Fall Weather Friends, the Cutie Mark Crusaders' talent show performance in The Show Stoppers, and the Summer Sun Celebration in Twilight Sparkle's flashback in The Cutie Mark Chronicles.

In The Mysterious Mare Do Well, Ponet cheers for Rainbow Dash after she saves Aura and again after she saves Cream Puff. He appears in formal attire at the Canterlot Garden Party in Sweet and Elite. He appears in Hearth's Warming Eve and The Last Roundup, sits at a cafe table with White Lightning in Hearts and Hooves Day, and appears at both wedding ceremonies in A Canterlot Wedding - Part 2.

Ponet watches the Summer Harvest Parade in One Bad Apple, even taking part in the parade with a different cutie mark in one shot, and is part of the parade during A True, True Friend before attending Twilight's princess coronation in Magical Mystery Cure.

Ponet appears next to Shoeshine in Princess Twilight Sparkle - Part 1, watches the Summer Sun Celebration in the following episode, dresses up as Star Swirl the Bearded in Three's A Crowd, attends Rainbow Dash's birth-iversary party in Pinkie Pride, appears at the beginning and end of Simple Ways, and is seen briefly in Filli Vanilli and It Ain't Easy Being Breezies.

Ponet is one of many ponies seen in the establishing shot of Ponyville in My Little Pony Equestria Girls: Rainbow Rocks.

In the game's outro he appears in the background with no cutie mark.

He appears in the background of The Ceremony with a somewhat different mane style and a slightly-differently-colored outfit.

He, with a differently-designed-but-same-colored stars cutie mark, is a character called "Elite Pony" in Gameloft's mobile game[2], and serves as an enemy minion during the "Rarity's Retro Revolution" event. He was added to the Android version of the game on April 30, 2014 before being removed a short time later. His in-game description states "With a spring in his trot and a top hat on his head, this pony is always ready to add a touch of class!" The game depicts him wearing his outfit from Sweet and Elite, A Canterlot Wedding - Part 2, Magical Mystery Cure, Princess Twilight Sparkle - Part 1, Simple Ways, For Whom the Sweetie Belle Toils, Equestria Games, Twilight's Kingdom - Part 1, Make New Friends but Keep Discord, Princess Spike, Canterlot Boutique, Rarity Investigates!, and Crusaders of the Lost Mark.

In Issue #8, he appears on page 5 at a table with Top Marks and Gingersnap. 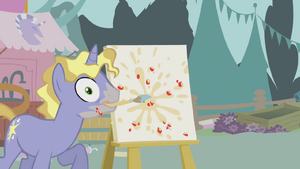