PonyMaker is an online promotional Flash game available on Facebook in which players can create their own ponies. Players can select and customize a variety of mane styles, body types, and accessories to create their ponies. The game was promoted by The Hub and developed by the software firm 360KID.

The requirements for the Facebook version are an activated Facebook account and The Hub must be liked before the game can be accessed. Sometimes, users may not be able to access the game a second time, and instead, be redirected to The Hub's Facebook page where they are asked to press a "Like" button, which won't appear since it has been pressed already.

A version themed to the episode Luna Eclipsed became available on September 30, 2013, under the title The Fabulous PonyMaker: Trick or Treat.

On April 20, 2016, Jim Miller declined an unofficial offering of "permission" to use a particular one of the possible creations from the Bridal Boutique[1][2] as a background pony in the show, stating that "we can't do that for legal reasons"[3] and that it's "complicated".[4]

Gameplay consists of choosing body parts and accessories from a multitude of different categories: Body, head, Cutie mark, horn, wings, Body pattern, Head pattern, Eye shape, Mouth, Facial hair, Mane, Ear, Tail. There are also accessories like: Hat, Glasses, Earrings, Neckwear, Vest, Cape, Sleeves, Foreleg and Hind leg. At the end, you choose a background that you want. Often the objects and manes resemble various in-show objects, such as manes resembling those of Sweetie Drops and Lyra Heartstrings in the category of the same name.

Items are chosen via vertical sliders, and the number of items can vary from four in the body type, to eighty or more in the facial hair category.

There is a randomizer button, which as its name suggests, selects an item randomly from each category.

Special hidden treats are available within the game by hitting different keys from the keyboard. For example, press the "a" key and a special Aquabats pony will be created. The "f" key will produce an animated ring of fire around your pony. The original Facebook version also allowed a user to change the size of your pony creation by hitting the number keys. 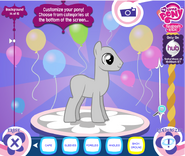