The Pony Pickers are a band consisting of "Raspberry Fluff", "Blueberry Pie", and either "Strawberry Gem" in Equestria or Derpy in the human world. They are alluded to and later appear as ponies in the IDW comics and first appear as humans in the film My Little Pony Equestria Girls: Rainbow Rocks.

In the DVD/Blu-ray audio commentary of My Little Pony Equestria Girls: Rainbow Rocks, Derpy, "Raspberry Fluff", and "Blueberry Pie"'s appearance on stage is jokingly remarked on, with Jayson Thiessen noting in particular "I mean, guys, this is the movie right here."

In My Little Pony Equestria Girls: Rainbow Rocks, the human Pony Pickers appear alongside Derpy as participants in the CHS Musical Showcase. Derpy plays the musical saw, "Raspberry Fluff" plays the triangle, and "Blueberry Pie" plays the cowbell. They are eliminated in the first round of the competition by the Cutie Mark Crusaders.

In the half-hour special Mirror Magic, "Blueberry Pie" makes a brief cameo appearance at the Canterlot Mall at the beginning.

On the Giant Robot cover RE of My Little Pony: Friendship is Magic Issue #24, DJ Pon-3 and Octavia Melody imitate "Strawberry Gem" and "Raspberry Fluff" respectively. 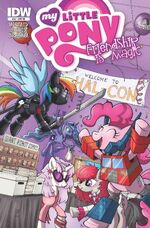 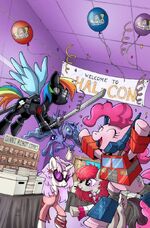 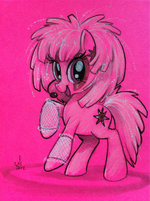