Ponyacci is a male Earth pony who appears in the IDW comics. He is a well-known clown entertainer and founder/instructor at Ponyacci's School of Clowning, Japes, and Buffoonery.

Ponyacci and the overall plot of My Little Pony Micro-Series Issue #5 were inspired by the Italian opera Pagliacci and are, by extension, a reference to Alan Moore's graphic novel Watchmen.[1] Ponyacci's design in clown makeup is based on the Pierrot costume.[1]

Ponyacci first appears in My Little Pony Micro-Series Issue #5. He appears, initially unidentified, outside a carnival tent where Ponyacci, the "greatest clown in all of Equestria", is giving a performance. Because he seems depressed, Pinkie Pie offers him her ticket to Ponyacci's show, but he politely declines and says not even Ponyacci could make him laugh.

After Ponyacci's performance, Pinkie and Twilight Sparkle go backstage to meet him and discover, as he washes off his makeup, that he is the same depressed-looking stallion they met before the show. Ponyacci explains that, though he loves being a clown and making others laugh, age is starting to get to him and he has decided to retire. Pinkie is devastated by this news, and Ponyacci is happy to know that he was such an inspiration to her, but he says "every performer needs to know when to leave the stage."

The next day, Pinkie sings an uplifting song for Ponyacci to try and cheer him up and convince him to not retire. Unfortunately, Ponyacci is resolute about his decision. He offers Pinkie Pie several tips on how to improve her own performing, and Pinkie gets another idea: instead of being a clown, Ponyacci should teach clowns.

Ponyacci is greatly intrigued by this idea, as he wouldn't need to travel so much or perform night after night and he could still leave his mark on comedy for generations to come. In gratitude, he hugs Pinkie Pie and thanks her. Some time later, Ponyacci establishes his School of Clowning, Japes, and Buffoonery, and he appears happier than ever.

On My Little Pony: Friends Forever Issue #9 page 5, Ponyacci appears in a crowd of ponies at Apple Con 45.

Ponyacci also appears on a poster on My Little Pony: Friendship is Magic Issue #40 cover A and on Issue #100 cover RE.

Ponyacci and Backstage Ponyacci are characters in Gameloft's mobile game, and act as a helper and boss during the "I Am Ponyacci" event, respectively. The event explains the confrontation between the two as Pinkie dressing Twilight up in Ponyacci's clown attire.

Ponyacci:
The greatest clown in all of equestria! (According to Pinkie, anyway--but she has great taste in clowns!)
Backstage Ponyacci:
Not even Ponyacci could get HIM to laugh... because he IS Ponyacci! PLOT TWIST!!!

"No, I... I'm afraid not even Ponyacci could get me to laugh."
— My Little Pony Micro-Series Issue #5

"I'm happy I could inspire you, Miss Pie. And I hope you keep clowning! But as for me... ...Well, every performer needs to know when to leave the stage."
— My Little Pony Micro-Series Issue #5

"I'm sorry, Miss Pie. If it makes you feel any better, your performance was excellent."
— My Little Pony Micro-Series Issue #5 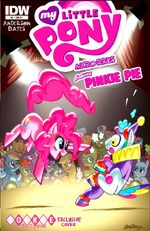 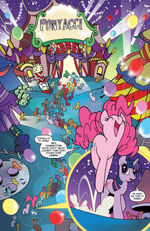 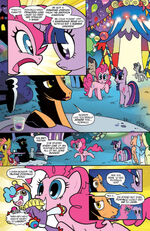 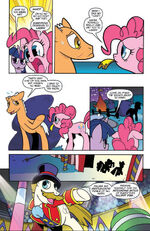 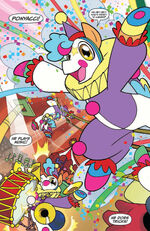 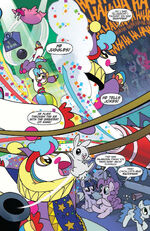 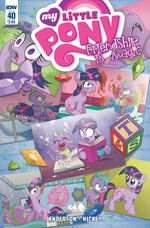 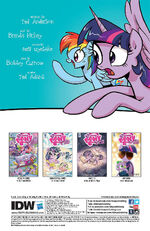