Start a Wiki
The Ponyville Day Spa is a day spa/beauty salon located in Ponyville that offers various care and cosmetic treatments such as baths, massages, and hooficures. Run by spa ponies, the day spa is primarily managed by the twin ponies Aloe and Lotus Blossom. It is called (the) Ponyville Day Spa in Applejack's "Day" Off and some materials, the La Ti Da Spa in Trixie and the Razzle-Dazzle Ruse, (the) La-Ti-Da Spa in some merchandise, and simply Day Spa in various materials.

Distance shots of Ponyville place the day spa on the edge of the town square, next to the joke shop. Externally, the building has yellow walls, a flashy fuchsia roof, a gold door, and a green sign with a depiction of a pony with a wavy gold mane. Its interior has a color scheme consisting mostly of shades of pink, purple, and yellow.

The day spa is first featured in the episode Bridle Gossip. Apple Bloom and Zecora use the spa's bath area to make a herbal bubble bath and cure the Mane Six of the effects of poison joke. Afterward, spa pony Lotus Blossom asks Zecora for the bath's recipe.

In Green Isn't Your Color, Rarity is a regular customer at the day spa, and she and Fluttershy have weekly get-togethers there. The two indulge in the spa's steam room, mud facial, massage, seaweed wrap, and hoof bath services—Rarity's "usual" regimen.

In A Friend in Deed, Pinkie Pie brings Cranky Doodle Donkey to the spa for a "spa emergency" in an attempt to win his friendship.

In Ponyville Confidential, the Mane Six and Spike have a spa day while discussing the latest "Gabby Gums" column in the Foal Free Press. Rarity invites Rainbow Dash to join her for a hooficure, but Rainbow declines at the last second, stating she doesn't like ponies touching her hooves.

In Filli Vanilli, Aloe and Lotus Blossom get the Pony Tones to perform at the day spa for the spa patrons.

In Castle Sweet Castle, Twilight Sparkle and Spike spend a day at the spa while Twilight's friends redecorate the Castle of Friendship. While at the spa, Twilight gets a "super-deluxe mane blow-out" and massage, and Spike gets an "extra-strength-hot-stone-deep-tissue massage" from masseur Bulk Biceps.

In Slice of Life, the Ponyville Day Spa's external design is altered to have a bluish-green roof, red door, and dark yellow sign. Lotus Blossom styles Matilda's mane for her wedding to Cranky Doodle, and Steven Magnet has a full body soak.

In No Second Prances, Starlight Glimmer meets Trixie at the spa while treating herself to a spa day. Trixie comments about the spa, "I'm gonna start coming here every time I visit Ponyville."

In Applejack's "Day" Off, Rarity and Applejack have spa days together, but they are infrequent due to Applejack's increasing chores. During one of their trips to the spa, Applejack discovers a leak in the piping, and she spends all of her and Rarity's spa time fixing it. Rainbow Dash has also become a regular patron, her usual regimen consisting of "pampered muscle massage and indulgent hooficure", but she is embarrassed when Applejack and Rarity find out. Other notable spa customers in the episode include Mr. and Mrs. Cake and Spoiled Rich.

In All Bottled Up, Trixie accidentally teleports the Cutie Map to the spa.

In A Rockhoof and a Hard Place, Rockhoof is given a job to work as a masseur at the spa, but accidentally presses too hard on Bulk Biceps' muscles.

The spa is briefly seen at the beginning of Rarity's Biggest Fan, with Aloe and Lotus Blossom tending to Rarity and Twilight Sparkle.

The spa appears three times during Dragon Dropped, one during a flashback with Rarity and Spike together, one in the present with Rarity by herself, and another in the present with both of them again, only with the latter being depressed after his fall out with Gabby. In The Big Mac Question, Sweetie Belle searches for Big McIntosh at the spa, only to be kicked out by Aloe for disturbing a spa patron.

In Rainbow Dash and the Daring Do Double Dare, narration in chapter 7, "The Talk of the Town", states "If there was anything Rainbow hated more than chili peppers, it was beauty treatments at the Ponyville Day Spa." In Rarity and the Curious Case of Charity, the Ponyville Day Spa is briefly featured in chapter 10, "Dyeing to Please", when Charity Sweetmint gets a makeover to make herself look like Rarity, and mentioned in chapters 11, "The Sweet Sounds of Success", 12, "The Ugly Truth", and 14, "Purple and Green". In Trixie and the Razzle-Dazzle Ruse.​[​specify​]​

In Gameloft's mobile game, the Ponyville Day Spa is simply called "Day Spa", and it serves as a shop in Ponyville from which players can purchase Towels and Facials.

Series 1 of Enterplay's trading cards includes a Day Spa card, #81 of 84. The back of the card reads "Feeling blah? Craving a bit of refreshment and grooming? Wash the blues away by treating yourself to hours of pampering at Ponyville's Day Spa! After a nutrient-rich Mud Rub & Seaweed Wrap to help your coat to shine, unwind with a Lotus & Aloe Herbal Soak in the hot tub. Finally, settle back on a lounge chair to enjoy a relaxing massage and pony-pedi while engaging in the latest bridle gossip with other patrons, such as Rarity and Fluttershy, who are seen here often. Satisfaction guaranteed!" The Day Spa is also referenced in flavor text in Enterplay's Collectible card game, on card #74 R of Lotus Blossom, on Equestrian Odysseys card #127 C, and on High Magic card #54 SR of Aloe and Lotus Blossom.

The spa is called the La-Ti-Da Spa in a magazine,[1] in Signature My Little Pony Special magazine issue 1's Equestria News,[2] and in The Ultimate Guide: All the Fun, Facts and Magic of My Little Pony. 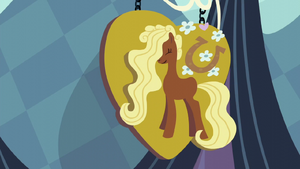 Retrieved from "https://mlp.fandom.com/wiki/Ponyville_Day_Spa?oldid=2134585"
Community content is available under CC-BY-SA unless otherwise noted.