Pound Cake and Pumpkin Cake are Mr. and Mrs. Cake's fraternal twin foals who make their debut in the season two episode Baby Cakes. They are sometimes collectively referred to as the Cake twins.[note 1]

In foal concept art by Lauren Faust on page 29 of the official My Little Pony guidebook The Elements of Harmony, Pumpkin Cake is named Paddy Cake.

In late December 2018, Jim Miller was asked "Have you guys ever considered new models for the Cake Twins and aging them up a bit? They’ve been babies for 7 years now lol" and replied "It’s never come up. And they aren’t in enough episodes to justify a whole switch over. But if it was a specific story point, we’d definitely do it then."[4]

The two are first introduced as newborn foals in the episode Baby Cakes, where Twilight Sparkle, Rarity, Fluttershy, Rainbow Dash, Applejack, and Pinkie Pie visit them at hospital. They are surprised to find out that Pound Cake is a male Pegasus and Pumpkin Cake a female unicorn, despite the fact that their parents are both Earth ponies. Mr. Cake explains by referring to distantly related unicorns and Pegasi in his and Mrs. Cake's family trees. Rainbow Dash, Twilight Sparkle, and Rarity caution the Cakes that young unicorns can exhibit bursts of magical power and that young Pegasi can be quite a handful once they learn how to use their wings.

The next scene shows the toddlers playing with Pinkie Pie on what she calls their "month-i-versary." Despite being only one month old, Pound Cake and Pumpkin Cake are already able to run around the house. That same day, the Cakes are also in need of a babysitter, and after Twilight Sparkle, Applejack, Rainbow Dash, Rarity, and Fluttershy decline the offer, they reluctantly ask Pinkie Pie to take care of the foals while they deliver a catering order.

This proves more difficult and less fun than Pinkie had expected. Her attempts to calm the foals when their parents leave, including trying to feed or bathe them, all end with the babies crying. Each time Pinkie can calm them only by emptying a bag of flour over her head, which amuses the foals greatly, but is a huge pain for Pinkie, especially in one scene where Pinkie Pie attempts to give the two foals a bath, and, as a last resort, ends up dumping another bag of flour on top of her head. Pinkie has become very wet while trying to give the twins a bath, and the flour mixed with the water ends up creating a sticky, doughy mixture on top of Pinkie's head.

Later, they also prove Twilight Sparkle and Rarity's concerns from the beginning valid. Pound Cake makes it difficult for Pinkie to chase after him when he starts flying and walking on the ceiling with the help of his wings, whereas Pumpkin Cake uses unicorn magic to levitate herself, phase through the laundry basket that Pinkie Pie trapped the two under, and break chains which Pinkie locked a toy chest with.

Eventually, Pinkie Pie breaks into tears when she realizes she cannot keep the foals under control. Only then do the babies stop playing around and feel guilty for their behavior. They attempt to cheer Pinkie up by imitating what she did to amuse them; emptying a bag of flour over their heads. The next scene shows them peacefully sleeping in their crib, giving Pinkie the opportunity to clean up Sugarcube Corner before their parents come home.

Pound Cake displays a habit of pounding on things and Pumpkin Cake has a habit of chewing on objects that aren't food, including a table cloth, a towel, and several toys. She also tries to chew on a broom stick that Pinkie Pie uses. Pumpkin Cake is also the first unicorn to be seen levitating herself.

Pound Cake and Pumpkin Cake make a brief appearance in the opening of the episode A Friend in Deed, watching Pinkie Pie do some sort of aerobic exercises. Initially unamused by Pinkie Pie's attempts to coax them into laughter, they become amused after Pinkie Pie manages to get into an accident, mirroring their behavior in Baby Cakes.

The twins appear briefly again in Ponyville Confidential, throwing a tantrum which is photographed and later featured in a "Gabby Gums" column of the Foal Free Press.

Pumpkin Cake, without her brother, makes another brief appearance in Magic Duel, sitting on a makeshift throne made by her parents, who are enslaved by Trixie at the time.

During Magical Mystery Cure, Pound Cake appears in one of Pinkie Pie's flashbacks.

In Pinkie Pride, the Cake twins appear briefly during Pinkie the Party Planner, popping their heads out of their stroller as Mr. and Mrs. Cake walk through town. Their parents sing that they were named during a foal shower that Pinkie Pie threw for them. They also appear in Filli Vanilli watching the Pony Tones perform at Sugarcube Corner.

In Slice of Life, Pound and Pumpkin appear with their parents as they transport the wedding cake to Cranky Doodle Donkey and Matilda's wedding, and they appear during the ceremony. They also appear during The Pony I Want to Be in Crusaders of the Lost Mark, The One Where Pinkie Pie Knows, and The Cutie Re-Mark - Part 2.

In On Your Marks, Pound and Pumpkin appear when the Cutie Mark Crusaders come to them in search of ponies to help with their cutie marks. In A Hearth's Warming Tail, they appear during Hearth's Warming Eve Is Here Once Again (Reprise), and in 28 Pranks Later, they pretend to be zom-ponies as part of a revenge prank against Rainbow Dash.

In A Flurry of Emotions, Pound and Pumpkin appear playing with and arguing over their toys. When Flurry Heart breaks one of their toys in an attempt to make peace between them, they get mad and throw cupcakes at her.

In It Isn't the Mane Thing About You, Pinkie Pie celebrates the twins "sneeze-iversary" at Sugarcube Corner, spraying them, her, and the store with silly string. The twins later help Pinkie to clean up, but (thanks to Pinkie taking a shampoo instead of a cleaning potion) end up with soft and bouncy manes.

During the special My Little Pony Best Gift Ever, Pound and Pumpkin briefly appear during the song One More Day, being pushed in a carriage by their mother.

In Rainbow Roadtrip, the Cake twins appear in the distance with their mother in the opening shot of Ponyville.

In The Beginning of the End - Part 2, Pound and Pumpkin both get brainwashed by King Sombra, and are summoned along with their parents to Canterlot. They are soon released from Sombra's mind control after he is defeated by the Mane Six. In She's All Yak, they both appear in the reused image of The Cutie Re-Mark - Part 2 during Fit Right In.

In The Ending of the End - Part 2, Pound and Pumpkin appear taking shelter with their parents and other Earth ponies as Ponyville closes itself off from the other pony races. In The Last Problem, Pound and Pumpkin attend Twilight Sparkle's coronation ceremony. They later appear as fully grown ponies in future Ponyville during The Magic of Friendship Grows, now in charge of Sugarcube Corner, and joyfully greet Pinkie's foal, Little Cheese.

The scenes with Pinkie wishing the Cake twins a Happy Monthiversary, her telling them jokes, and her singing the Piggy Dance to them from Baby Cakes, as well as the Anniversary of the Cake Twins' first sneezes from It Isn't the Mane Thing About You reappears in Cakes for the Memories.

In the My Little Pony: Friendship is Magic series, Issue #5 Larry's Comics and Jetpack Comics-exclusive covers RE depict 5-bit-denominated Equestria postage stamps that feature Pound and Pumpkin. On Issue #8 page 11, they appear in baby bags strapped onto their parents. In Issue #9, they are left in the care of Big McIntosh when Mr. and Mrs. Cake leave to deliver a cake, and Big Mac takes them to see Trixie's puppet show. They also appear on the Issue #13 Jetpack Comics-exclusive cover. Of Issue #31, Pound Cake appears on cover A, and both twins appear on page 11.

THE CAKE FAMILY are the proud owners of Sugarcube Corner, Ponyville's most delicious bakery. The store is run by the kindly MR. CARROT CAKE and his wife, MRS. CUP CAKE, who make the tastiest sweets for every occasion. Pinkie Pie loves working in the bakery and often watches over the Cakes' twin foals, POUND CAKE and PUMPKIN CAKE.

THE CAKE FAMILY owns Sugarcube Corner, where they make the most delicious baked goods in Ponyville. CARROT CAKE and his dear wife, CUP CAKE, are hard-working business owners who delight in making treats for all types of events. That is, when they're not chasing their twin foals, POUND CAKE and PUMPKIN CAKE. 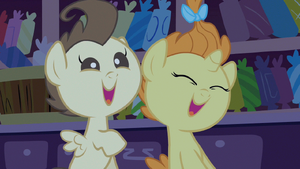