Who's being annoyed late at night right now?

We have been there once too, Spike.

I was just getting to the really good part!

Spike telling Twilight what happens in his comic book.

I'll show you how the Mane-iac got this way.

...to power her doomsday device!

Spike showing reasoning about his comic.

The motherly side of Twilight.

Spike, I'm a princess. Rarity told me that princesses need their beauty sleep.

Twilight looking at her awesome nightcap.

Spike heading off to bed...which means Twilight can finally go to sleep.

Cleaning up the place

The Mane Six cleaning up the ol' castle.

Spike at your service!

Spike not at your service.

Three writers for one episode? That's an academy record.

Applejack is putting up a painting of apples while Pinkie Pie scrubs the floor in a skating style.

Rainbow Dash the focus of the shot while Spike is a blur...yeah.

"I mean, you're a princess. Princesses are supposed to let other ponyfolk (and dragonfolk) help them!

"No! I wasn't reading the comic two more minutes after you went to bed!"

He's just there for comic relief.

Do a barrel roll!

Twilight Sparkle is too happy and unaware to think about barrel rolls and Spike's demise.

"I could do it!" *the bucket flied into the air*

Well, reading my comic book will make me feel better.

Well that bucket was in the air for a while.

Spike reading his comic in the castle.

Spike taking a closer look at his comic.

"This smells like rotten eggs on a Friday morning!"

"If only my friends could read with me."

Spike trying to read the little writing at the bottom of the page.

Spike is angry! Not.

Just forget about it.

Spike looking for a microscope.

Oh no! Will Spike ever get to find out what the text says?

I don't get it. What could this mean?

Spike trying to make sense out of the text.

Spike! You only have about thirty seconds left! Use them wisely!

Ten sec- Woah. Spike, what have you done?!

The Mane Six are very curious.

"I knew I shouldn't have read that text!"

There goes Spike. Let's go, too!

How many times has AJ bitten Rainbow Dash's tail?

A case of déjà vu?

Another one of Pinkie's mottos:"If you can't beat 'em, join 'em!"
Add a photo to this gallery

Spike looks behind him.

An explosion...that can't be good.

What's happening at that museum?

Why are those ponies running in terror?

How kind of you to join us!

Is she talking to us?

Did she call us Power Ponies?

Some pony zap us back out.

So, the Mane-iac thinks we're the Power Ponies?

Yes, she thinks you're the Power Ponies.
Add a photo to this gallery

Looking at the mane six and Spike from the ground.

Staring into your soul.

This is why you don't see pretzel carts anymore.

If we wanted pretzels, we'd go and buy them!

Mistress Mare-velous struggling with her lasso.

That moment you realise that you have no clue how to use a lasso.

"You're the Masked Matter-Horn! You can shoot all kinds of crazy power beams from your horn!"

I got the touch. I got the power.

"Dash, quick! You're Zapp, and your superpower's controlling the mighty forces of nature! Unholster the lightning bolt!"

Holding up the lightning strike.

That wasn't supposed to happen.

Why is she wearing bunny ears, a scarf, and carrying cupcakes? Not to mention the glasses...and the flag!

Chillin' like a villain, while the heroes defeat themselves.

I don't think it's possible to hear someone talking while in a tornado, let alone talk at all.

"That wouldn't be polite."

I didn't tell you to think of a tea set.

I gotta get this back to the museum.

Pecos Bill ain't got nothing on Applejack.

"I was already awesome."

The shampoo factory is where she had her accident.

Holy inferiority complex, Batman!
Add a photo to this gallery

All is calm outside the villain's lair.

This is where the Mane-iac had her accident and got her powers.

Zapp, what are you doing?

All right, you crazy-haired mare! Come out with your hooves up!

This is too much fun to resist.

Watch out for falling glass!

Nopony cares about my plans.

Was that a big enough explosion?

"All right, Ponies! Time to hero up!"

Let's do this thing.

Real eggheads tell the world what their spell is supposed to do instead of letting it speak for itself.

This is not Aladdin, Rarity.

Hoofarangs can be useful, too.

Wonder if he dislocated anything. Oh well, not my problem, I just defended myself.

They don't call her Fili-Second for nothing. They have to pay her! (HEY-YO!)

Rarity can make anything a work of art.

I will crush my duplicate!

Tough umbrella. Well, it's a comic.

"I so do love this pretty power bracelet." I'm gonna make one just like this for my sister when we get home.

AJ to Rarity: I dare you to ask Zapp 'what are the chances of getting struck by lightning?'

Let's get the big one.

Seems like her hair can also change length at will.

If a hairspray doesn't intimate, a 10-foot one might in the mane of a mad villain.

Impetuousity can work against you.

"We'll just see about that!"

Don't look out! They're not gone.

Please save the day!

Of course not, just wanted to embarrass you.

I've got to do something!

Time to ruin his day a little more: *Clang*

Where did that bucket even come from?
Add a photo to this gallery

A vent that goes to another vent?

Oh no, they have the girls.

Fluttershy's pose has changed from when she was captured.

Where did the Mane-iac appear in the news today?

A special platform built just so somepony can spray a 10-foot can.

You were just too jealous of the fact that my mane makes an awesome recliner.

When this orb powers up my machine....

Everypony's mane in Maretropolis will grow wild and I will rule.

You Power Ponies will be my first victims.

Pinkie Pie looks scared while Dash is like "you're kidding, right?"

Hurry up, stall the villain, because they love to monologue!

Isn't Spike a somebody, not a somepony?

Ha, your sidekick couldn't even stop me..

And you better not suggest I was wrong to let him go!

Hum Drum is more than just a sidekick, he's a friend.

And he always comes through when we need him!

They really do care for me.

Only the Mane-iac can laugh with ten different expressions.

The clones are too enraptured to look down.

Thanks for saying "me". With all those "we"'s, you were sounding too much like Princess Luna.

That is one big cape.

More crazy laughs. The Mane-iac has the situation under control.

Where'd he find that crate?

Why must I underestimate everypony?

"You sly dog. You got me monologuing!"

That is the worst this episode gets for hoof-to-hoof (or claw) fighting.

Now let's get out of this drafty cage.

That's not how it was supposed to go!

Now she just looks cute instead.

Dignified as ever...
Add a photo to this gallery

Let's watch the tornado as it sucks us in.

Time to take out the trash!

Rarity cannot live without some flair.

Where is the door handle?!

They're not going anywhere.

Four more clones are down.

Twilight's fire spells would be interesting if they actually did something.

If you don't mind, I'll show myself out of a door with no opening button.

It's all taken care of, right?

C'mon, power up! I really want to see this!

Ah, the plot finally gives me something to do, and it's rather unwise.

I guess traditional crosshairs are taboo.

The Mane-iac doesn't fire... because?

"Are you okay?" Well, obviously not.

"Are you kidding me?" Again, obviously not.

The Mane-iac still doesn't fire... because?

Yes, I can open my mouth wider than this.

Success! We must have more of these awesome Spike faces.

Did she really think that would work?

It's not every day you get to destroy a giant blow dryer of doom.

Saddle Rager calm down, you destroyed the device enough already.

Sorry, got carried away.

What to do when you lose? Laugh!

Makes you wonder if Maretropolis has a loony bin the equivalent of Arkham.

Going back home.
Add a photo to this gallery

Phew, glad that's over with.

"... the Maretropolis bakery was only sixty-five blocks away!"

I didn't know they were really enchanted.

Huh? Where'd it go?
Add a photo to this gallery 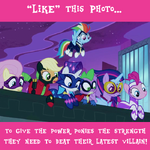 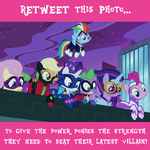 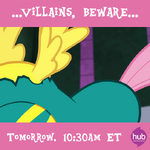 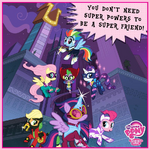 Add a photo to this gallery
Retrieved from "https://mlp.fandom.com/wiki/Power_Ponies/Gallery?oldid=1953972"
Community content is available under CC-BY-SA unless otherwise noted.