Start a Wiki
Power Ponies Go is an online promotional Flash game previously available on Discovery Family's official website. Based on the My Little Pony Friendship is Magic episode Power Ponies, the game is a 3D side-scroller in which the player controls some of the main cast as their Power Pony personas and collects comic book pages to clear levels.

In each level of the game, the player controls one of the main cast. The objective is to collect a number of comic pages in a 3D maze-like environment populated by enemies (the Mane-iac's henchponies, including soldiers, officers, and captains). The player can move up, down, left, and right with the arrow keys and attack enemies with the spacebar. Attacks vary depending on the character the player is in control of:

The player can also attack enemies with super attacks by pressing the Shift key. Super attacks have much farther range than regular attacks (reaching enemies across the screen) but expend "Pony Power" (the energy meter below the player's health bar). Super attacks also vary between characters:

Pickups in the game include health, energy for the player's Pony Power meter, Double Points to momentarily double the player's acquisition of score points, Bonus Time to take several seconds off the player's time spent in the level, and a speed boost power-up.

The level is cleared when the player collects all five comic pages (ten pages in levels 3 and 4, seven reflector shards in level 5). When the player's health bar is empty, they get a game over; they can start the level over without having to start the whole game over, but their total score drops to zero.

In addition to the comic pages required to clear the game, each level also has a comic book cover for players to collect. These comic covers are not required to clear the game, but if the player collects all five and then clears the game, they unlock special abilities that can be used on subsequent playthroughs. When a special ability is used, it cannot be used again until it recharges.

The game's story is very similar to that of the episode it's based on, with the Mane Six and Spike being transported to the comic book world of Maretropolis and becoming the Power Ponies. However, soon after they arrive, the Mane-iac captures Fluttershy and Pinkie Pie and holds them hostage at her shampoo factory, and it's up to Spike and the others to save them.

In level 5, Spike frees Fluttershy and Pinkie Pie from captivity, and they help him against the Mane-iac's henchponies. Spike collects and assembles the pieces of a broken reflector and uses it against the Mane-iac when she fires her doomsday device. The game concludes with a shot of the Mane-iac being sent flying across Maretropolis. 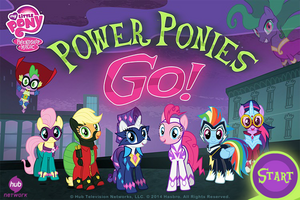 Retrieved from "https://mlp.fandom.com/wiki/Power_Ponies_Go?oldid=1774203"
Community content is available under CC-BY-SA unless otherwise noted.