Prim Hemline is a female Earth pony who appears in the season four episodes Rarity Takes Manehattan and Equestria Games. She is a fashion critic and judge for Manehattan's Fashion Week.

Prim first appears in Rarity Takes Manehattan when Rarity is the last to arrive for the Fashion Week rehearsal; she immediately presents herself as a no-nonsense fashion critic. She briefly chews out Rarity for her nearly late arrival, telling her that she'll be presenting her designs last, and informs Rarity and her fellow designers of the details about the following day's run-through.

Prim is later seen at said run-through, expressing her utmost approval for Suri Polomare's dresses, unaware that she'd stolen the fabric for the dresses from Rarity.

At the fashion show, Prim once again showers Suri with praise for her designs before presenting Rarity's "Hotel Chic" line. She is awestruck by the unique designs and commends Rarity, but is surprised when Rarity storms out of the plaza in the middle of the show.

Prim appears out of focus in Equestria Games.

Prim Hemline's human counterpart appears in the Better Together short Display of Affection, where Rarity works as an intern in her dress shop. In the Choose Your Own Ending short Best Trends Forever, Rarity forgets to bring Prim Hemline's style guide when reporting on the latest fashion trends for a student-hosted CHS news report.

Prim Hemline is one of the available playable characters in Gameloft's mobile game. She was added to the Android version of the game on April 30, 2014 before being removed a short time later. Her in-game description states "Prim Hemline is a renowned fashion critic who often judges at Manehattan's Fashion Week. Nothing makes this pony whinny more than a daring fabric!"

The intro text for the Sweet Apple Acres quest "A Word of Advice" states that Prim hosts the "Diamond Hooves Fashion Awards" in Canterlot.

A mini-figure toy of Prim Hemline was released in the nineteenth wave of mystery packs in 2017. Her collector card states that she and Coco Pommel "give fashion advice".

In the Enterplay collectible card game's expansion set The Crystal Games, card #69 C of Prim Hemline gives her the description "Prim Hemline likes her fashion shows organized, orderly, and most of all, on schedule. If things aren't just how she likes them then she'll DEFINITELY make sure everypony knows it."

"Miss Rarity, how is it that all your competitors are here half an hour early, and yet you arrive seconds before we begin?"
— Rarity Takes Manehattan

"Let's have another round of applause for Suri Polomare's amazing collection."
— Rarity Takes Manehattan

"Rarity, they all adore you! Aren't you going to tell them about your fabulous pieces?"
— Rarity Takes Manehattan 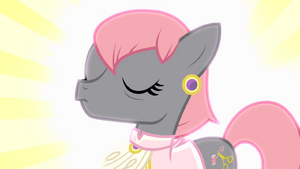 Retrieved from "https://mlp.fandom.com/wiki/Prim_Hemline?oldid=2098764"
Community content is available under CC-BY-SA unless otherwise noted.