Start a Wiki
Prim Posy is a female Pegasus pony with a grayish blue coat, pale yellow mane and tail, orange eyes, and a cutie mark of three purple umbrellas.

Prim Posy first appears in the season one episode The Ticket Master. She also appears in Call of the Cutie at Diamond Tiara's cute-ceañera. She later appears at the Grand Galloping Gala in The Best Night Ever, singing during At the Gala at one point.

In season two, Prim Posy appears in a checkerboard shot of ponies during Becoming Popular (The Pony Everypony Should Know).

In season three, Prim Posy appears from behind in Too Many Pinkie Pies and sings during A True, True Friend in Magical Mystery Cure.

In season four, Prim Posy appears in Canterlot at the beginning of Princess Twilight Sparkle - Part 1, dresses like Star Swirl the Bearded in Three's A Crowd, and appears during the reprise of Pinkie the Party Planner in Pinkie Pride.

In the Canterlot Nights expansion set of Enterplay's collectible card game, Prim Posy is named on card #76 C, which lists the quote "Actually, I'm the one who started the lily accessory craze in Ponyville! I don't mind all the copycats. Imitation is the sincerest form of flattery, after all!"

"Actually, I'm the one who started the lily accessory craze in Ponyville! I don't mind all the copycats. Imitation is the sincerest form of flattery, after all!"
— Enterplay collectible card game Canterlot Nights card #76 C of Prim Posy 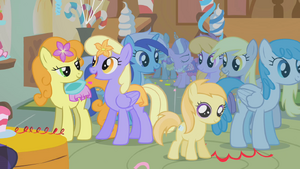 Retrieved from "https://mlp.fandom.com/wiki/Prim_Posy?oldid=2111739"
Community content is available under CC-BY-SA unless otherwise noted.