Prince Blueblood is a royal male unicorn pony who resides in Canterlot. He is the distant nephew of Princess Celestia and Princess Luna and the cousin of Princess Cadance. He starts out as the object of Rarity's affections, but once they meet in person, he falls short of her expectations.

Prince Blueblood first appears in Rarity's fantasy in The Ticket Master, where she envisions Princess Celestia introducing her to him at the Grand Galloping Gala and the two of them swiftly falling in love and getting married. In The Best Night Ever, Rarity meets Prince Blueblood in person at the Grand Galloping Gala and he appears physically the same. Rarity expects him to court her as he did in her daydream, but he instead treats her with little respect. Over the course of the night:

Thus, it appears that Prince Blueblood is thoroughly accustomed to being treated like royalty and that he possesses no sense of chivalry whatsoever.

Throughout the entire Grand Galloping Gala, Rarity tries to make pleasant company with Blueblood, but his self-centered nature drives her to the point of extreme irritation. After he uses her to shield himself from an incoming cake, Rarity finally snaps and tells him off as the most "uncharming prince she's ever met", and shakes the cake all over him in retaliation. After the Gala descends into chaos, Rarity and her friends leave the scene, but she loses her glass slipper when running down a set of stairs. Pinkie Pie suggests that now her prince is sure to find her; panic-stricken at the thought, Rarity smashes the slipper and runs off.

In Sweet and Elite, Prince Blueblood appears during the song Becoming Popular (The Pony Everypony Should Know).

In Magical Mystery Cure, Prince Blueblood appears in one of Rarity's flashbacks.

In Equestria Games, Prince Blueblood appears as a spectator at the titular event, sitting in between the delegates from Saddle Arabia and the Duke and Duchess of Maretonia. Here, his cutie mark is the same as that of Fancy Pants.

Blueblood is part of the trading card set: his card says he's Celestia's nephew, and that his family link to Luna and Celestia is "far removed". "You could call Prince Blueblood the most eligible unicorn bachelor in Canterlot, but you'll stop as soon as you meet this royal pain."

In My Little Pony: Friends Forever Issue #26, Prince Blueblood accompanies Shining Armor to Yakyakistan to establish trade agreements with the Crystal Empire. While Shining Armor inadvertently sours relations with the yaks, Blueblood uses his diplomatic experience to win the yaks over.

In a "what if?" story presented in My Little Pony: Deviations, Prince Blueblood is Celestia's personal student instead of Twilight Sparkle. However, due to his overblown ego during Nightmare Moon's attack, he angers Applejack, Fluttershy, Rarity, Rainbow Dash, and Pinkie Pie, and he ends up getting banished to the moon.

Prince Blueblood appears in episode 2 of Rarity's Peek Behind the Boutique, "Fashion vs. Function".

Blueblood appears in a story from the French My Little Pony magazine. In this story, he is referred to as Vladímir, although it is inconsistent with his original name which has been also retained in the show's French dub. He also appears to treat Rarity better than in the animated series.

PRINCE BLUEBLOOD may be of a noble background, but he's also quite vain, which is no doubt why Rarity once had a crush on him.

"My royal lips have touched common carnival fare!"
— The Best Night Ever

"This really is a gorgeous castle you have here. I've heard such great things about it but I hadn't made it out here because, train travel, you know? It just doesn't agree with me. It's so crowded and... common, you know?"
— My Little Pony: Friends Forever Issue #26

"This is a nice throne! Celestia, you really need one of these! Your throne is nowhere near this nice!"
— My Little Pony: Friends Forever Issue #26

"Princes of Canterlot don't carry their own luggage. That's what servants are for."
— My Little Pony: Friends Forever Issue #26 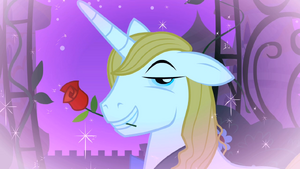