Prince Rutherford is a male yak and the prince of the kingdom of Yakyakistan. He first appears in the season five episode Party Pooped.

Prince Rutherford appears in Party Pooped as part of a Yakyakistani delegation to Equestria. When he first meets Princess Twilight Sparkle, he expresses a desire to foster a good friendship between ponies and yaks. However, over the course of their visit to Ponyville, Rutherford and his entourage trample and destroy everything with which they take even the slightest issue.

Thanks to Pinkie Pie—who travels across Equestria in an attempt to help the delegation—a friendship party in Ponyville boosts Rutherford and the yaks' spirits. When Pinkie approaches Rutherford and talks at length about what makes Equestria great, Rutherford calls off his declaration of war and becomes good friends with the ponies.

In Not Asking for Trouble, Prince Rutherford invites Pinkie Pie to the Yakyakistan holiday of Yickslurbertfest. However, during their celebratory stomping, the yaks accidentally cause an avalanche that covers the village in snow. Pinkie Pie offers to bring her pony friends to help, but Rutherford refuses out of personal pride. In the end, Pinkie brings her friends to clear the snow away in secret. With the yaks' pride preserved, Rutherford declares Pinkie an honorary yak and "the best kind of friend".

Rutherford appears in the two-part premiere School Daze representing the yak student Yona as she enrolls at the School of Friendship. However, when Chancellor Neighsay voices displeasure at the school being attended by non-pony creatures, Rutherford takes extreme offense and pulls Yona out of school. Later, when the students are found after they run away, the Mane Six convince Rutherford to allow Yona to re-enroll at the school.

In My Little Pony Best Gift Ever, Rutherford appears celebrating the yak holiday of Snilldar Fest, and is approached by Pinkie Pie for help finding a gift for Twilight. Rutherford admits that the "Gift Givers of the Grove" surpass the yaks in this regard, and gives Pinkie a map to their home.

In The Ending of the End - Part 2, Rutherford appears during the final battle against Queen Chrysalis, Lord Tirek, and Cozy Glow after he and his subjects are rallied by Yona. In The Last Problem, Rutherford attends Twilight Sparkle's coronation ceremony. He also briefly appears in Pinkie Pie's group shot during The Magic of Friendship Grows.

Prince Rutherford's appearance during the Yaks' party with him finally accepting the ponies in Party Pooped reappears in Cakes for the Memories.

PRINCE RUTHERFORD is a gruff Yak leader who sought to improve relations between Yakyakistan and Equestria. He can be a blowhard when he doesn't get his way and is known for his tantrums. The cordial ponies of Equestria welcomed him with open hooves, showing him the power of friendship.

Prince Rutherford is a character in Gameloft's mobile game, and serves as a boss during the "Convocation of the Creatures!" event. His in-game description states, "Though he leads his own kingdom with plenty of pride, this hot-headed prince has his stubboner[sic] side!"

Prince Rutherford is portrayed as loud and incredibly short-tempered. He is usually gracious enough to meet with Twilight and her friends on calm footing, but he becomes volatile if something displeases him, typically flying into a destructive rampage. He is, however, cultured enough to appreciate classical music.

Rutherford speaks in broken sentences, omitting most grammatical articles from his speech and sometimes referring to himself and his entourage in the third person.

Like most yaks, he takes great pride in being a yak, to the point where he found asking for help beneath him in Not Asking For Trouble (though only because he expected the ponies to help without being asked to do so).

"Me honored. Yaks hope for great friendship between ponies and yaks. [echoing] Friends for a thousand moons!"
— Party Pooped

"Pink pony ask too many questions."
— Not Asking for Trouble

"Aww, Prince Rutherford knew it Pink Pony all along! Yaks best at guessing."
— My Little Pony Best Gift Ever

"Yaks glad Celestia not let us go to war with griffons. Yaks like griffons."
— My Little Pony: Friendship is Magic Issue #50 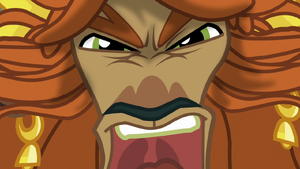