Princess Erroria is the placeholder name of a female Pegasus pony with a vanilla coat, wisteria mane and tail, and blue irises. Despite her placeholder name, she is not depicted as a princess in any official material. Depending on the episode, her cutie mark is either a single pink flower, a white feather, a horseshoe, or nothing at all, and she appears as four different kinds of pony, including as an Alicorn due to an animation error.

She shares her design with Cotton Cloudy and "Tornado Bolt".

She, along with "Tornado Bolt", Cotton Cloudy, "Noi", Aura, Liza Doolots, and "Dinky Doo" and as well as Prim Posy, Lemony Gem, "Serena", "Pinkie Feather", "Rainy Feather", "Mango Dash", and "Sweet Pop", was to appear in Friendship is Magic, part 2.[1]

Princess Erroria appears several times in both seasons one and two as a non-speaking background filly.

Princess Erroria debuts at Diamond Tiara's cute-ceañera in Call of the Cutie, where she displays the flower and feather cutie marks. Her unicorn version appears in Twilight Sparkle's imagine spot in Lesson Zero with the addition of wings due to an animation error.[2] In The Cutie Mark Chronicles, she appears in Fluttershy and Rainbow Dash's flashback in Cloudsdale during Summer Flight Camp and later spectating the race between Rainbow Dash and the Boy Bullies and cheers during the sonic rainboom.

She is dressed as an astronaut in Luna Eclipsed without a cutie mark, and she is also shown receiving candies from Twilight alongside "Noi" and "Piña Colada". Princess Erroria also competes in the Sisterhooves Social with Cloud Kicker. She watches Apple Bloom in The Cutie Pox and appears in The Mysterious Mare Do Well as a fan of Rainbow Dash. She is shown giving a Hearts and Hooves Day card to Diamond Tiara in Hearts and Hooves Day. An Earth pony version appears in A Friend in Deed during Pinkie Pie's Smile Song. She also appears as a background character in Ponyville Confidential using the playground outside the Ponyville Schoolhouse.

In One Bad Apple, Princess Erroria makes a background appearance spectating the Ponyville Summer Harvest Parade. In Apple Family Reunion, she appears as an Earth pony going on the hayride (occasionally with wings) during the titular event. She appears as a unicorn in both Just for Sidekicks and Games Ponies Play walking with Daisy at the Crystal Empire train station. In Magical Mystery Cure, she appears in the crowd of ponies angry with Rarity over her handling of the weather in What My Cutie Mark is Telling Me and later during A True, True Friend singing from a window with Shoeshine.

In Pinkie Pride, Princess Erroria appears watching the banner being raised for Rainbow Dash's birth-iversary and later attending Cheese Sandwich's party and sliding down his accordion with Ruby Pinch in The Super Duper Party Pony. In Simple Ways, she makes a backgrouhnd appearance at the Ponyville Train Station with Sea Swirl. In Filli Vanilli, she attends the Pony Tones concerts at Zipporwhill's cute-ceañera and later at Mayor Mare's ribbon-cutting ceremony. In Twilight Time, she appears as one of the many foals interested in the Cutie Mark Crusaders and eventually attending Twilight Time. In It Ain't Easy Being Breezies, she and Ruby Pinch make a background appearance watching the mariachi band prepare to cheer for the Breezies. In For Whom the Sweetie Belle Toils, she makes a background appearance as a passenger aboard the Friendship Express with Goldengrape. In Leap of Faith, she spectates as Granny Smith's attempts to break the Equestrian high diving record at the Ponyville Swim Meet. In Inspiration Manifestation, she appears outside the Carousel Boutique with Cloud Kicker during the Foal and Filly Fair. In Equestria Games, she appears in the Crystal Empire stadium having her ears covered by the Earth Pony beside her as Spike improvises the lyrics to the Cloudsdale anthem.

In The Cutie Map - Part 1, Princess Erroria appears as a resident of Our Town. At the end of Tanks for the Memories, she appears with Rare Find bundled up walking in the winter snow. In The Lost Treasure of Griffonstone, she appears in Gilda's flashback at Junior Speedsters flight camp in Cloudsdale. In Made in Manehattan, she appears in Manehattan trotting through the audience for the Midsummer Theatre Revival holding a balloon. In Brotherhooves Social, she competes in the Sisterhooves Social with Cloud Kicker and cheers for Rainbow Dash and Scootaloo after they win the obstacle course. In Crusaders of the Lost Mark, she appears at the Ponyville Schoolhouse during The Vote and later watches as new equipment is brought to fix the playground. In The Cutie Re-Mark - Part 1 and The Cutie Re-Mark - Part 2, she appears in Cloudsdale spectating the race between Rainbow Dash and the Boy Bullies in flight camp when Twilight Sparkle and Spike get caught in a time loop trying to stop Starlight Glimmer.

In On Your Marks, Princess Erroria appears in the audience for Tender Taps' dance recital. In Newbie Dash, she appears in Ponyville in the audience for Rainbow Dash's first show with the Wonderbolts. In A Hearth's Warming Tail, she makes a snowpony with other fillies outside the Castle of Friendship and later appears inside having a present land on her during Hearth's Warming Eve Is Here Once Again. She also appears in the "A Hearth's Warming Tale" story running through the streets of Canterlot with Piña Colada, caroling with other fillies outside Chelsea Porcelain's house during Pinkie's Present, and standing on a snowpony. In Spice Up Your Life, she appears walking in Canterlot's Restaurant Row with Sea Swirl and noticing Pinkie Pie and Saffron Masala advertising the Tasty Treat during It's Gonna Work. In The Fault in Our Cutie Marks, she and a colt appear being taught to lift weights by Bulk Biceps, lifting a barbell with cupcakes as weights, and later attends Gabby's cute-ceñeara at Ponyville Town Hall.

In Forever Filly, Princess Erroria appears in the audience for Claude's puppet show. In Parental Glideance, she appears in the audience for the Wonderbolts' showcase in Canterlot. She later appears in Rainbow Dash's flashbacks sitting in the stands with Sunshower Raindrops noticing her parents loudly cheer for her during medal ceremonies for races. In The Perfect Pear, she appears with Cloud Kicker in front of a honey booth at the Ponyville Marketplace. In Fame and Misfortune, she appears walking outside the Castle of Friendship with Golden Harvest and Amethyst Star, in the crowd of foals surrounding the Cutie Mark Crusaders near the Ponyville Schoolhouse, having a speaking role talking to Rainbow Dash with Ruby Pinch about the Journal of Friendship, mentioning she ripped out Twilight Sparkle's parts before following Rainbow Dash with her other fans as she flies away, and finally in the crowd of ponies arguing outside the Castle of Friendship over the journal.

In The Maud Couple, Princess Erroria appears running through a Ponyville street with Piña Colada and later attending Maud Pie's birthday party outside Ponyville Town Hall with Lyra Heartstrings. In Yakity-Sax, she appears in the audience for the Wonderbolts Derby in Canterlot. In The Washouts, she attends a meeting of the Rainbow Dash fan club, appears in the audience for each of the titular group's two shows in Ponyville, and later attending a Scootaloo fan club meeting.

In the special My Little Pony Best Gift Ever, she appears during One More Day running through Ponyville with other foals before she trips and falls over and later singing in the Ponyville square with Cheerilee and other foals.

In Enterplay's collectible card game, her tail is shown on card α #51 R of Apple Stars.

"I wipped out all the Twilight Spawkle lessons 'cause they were getting in the way of the good ones."
— Fame and Misfortune

"That's why you wanna be Team Dash! She's the only one that didn't weally need to learn anything, because she was alweady so cool."
— Fame and Misfortune 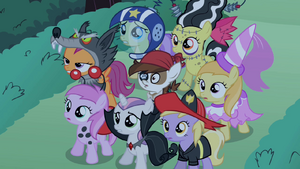