My Little Pony Friendship is Magic Wiki
Register
Don't have an account?
Sign In
Advertisement
in: Pony Life episodes
English

Princess Probz (Parts 1 and 2) is the first episode of My Little Pony: Pony Life.

In this episode, Pinkie Pie's friends help her audition for a televised cooking competition, but when the rest of the Mane Six get caught in a sticky situation, Pinkie has to audition all on her own.

The episode begins at Sugarcube Corner, with Pinkie Pie baking a giant ice cream sundae and accidentally making a huge mess. Pinkie explains to her friends over potion drinks that she is practicing for her upcoming audition for the Royal Jelly Juggernaut, a famous televised cooking competition between the best bakers in Ponyville and judged by Princess Celestia. Twilight Sparkle mentions that the competition is ruthless and contestants can be eliminated over the smallest mistake. Pinkie is optimistic about her chances, but Twilight rallies the rest of the Mane Six together to help her prepare.

Twilight tells Pinkie to keep a clean workspace and observe kitchen health codes at all times. Rainbow Dash tells her to be very flashy and grab as much attention as possible. Lastly, Rarity tells Pinkie to look good for the TV cameras. For her audition, Pinkie Pie decides to make upside-down flan cake. Unfortunately, in her clumsiness, she makes a gigantic mess in the kitchen again, and the rest of the Mane Six get stuck in a large pile of cake batter.

With the ponies trapped in cake batter, they are unable to accompany Pinkie Pie to her audition, and Twilight, Rainbow, and Rarity remind her of the advice they gave her. As Pinkie Pie sorrowfully departs for her audition, the rest of the Mane Six realize they were wrong to change her, and at Applejack's urging, they try to eat their way out of the cake batter.

At her Royal Jelly Juggernaut audition, Pinkie Pie prepares to make her upside-down flan cake, but in her nervousness and efforts to follow her friends' advice, she makes a mess and embarrasses herself in front of the judges. The rest of the Mane Six arrive just as Pinkie finishes making her dessert and serves it to the judges. The ponies fear Pinkie's immediate elimination, but Princess Celestia loves the cake she made and grants her entry into the competition. Pinkie and her friends are overjoyed.

Back at Sugarcube Corner, Twilight apologizes to Pinkie for trying to change her when her way of doing things was fine all along. Pinkie forgives her friends, saying she cannot help but be herself—but after drinking a transformation potion, she remarks that sometimes it is fun to be her friends as well.

Rarity: [to Pinkie Pie] I will always love you, but... you've ruined me!

Applejack: [to fourth wall] Did you miss this? I missed this.

Pinkie Pie: That's what I love about you. You're brilliant without even trying.

Rarity: You know, darling... I once thought about getting into the "biz", meaning the TV industry. I could've been a star, too, I tell you. But I gave it all up to focus on my suntan. Where's that tan now? Don't ask. Long story.

Applejack: We gotta make a plan to get out of this flan! Uh, as quick as we can! Hand me that pan! Let's eat!

Princess Celestia: It's raw... beautiful television! And not only that, this is the best cake I've ever taken a teensy little bite of! 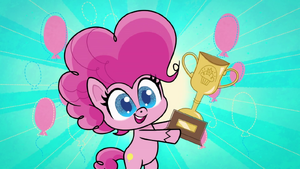