Princess Spike is the tenth episode of the fifth season of My Little Pony Friendship is Magic and the one-hundred and first episode overall.

The various background characters featured in the episode were designed by Rebecca Dart, Kora Kosicka, Fernanda Ribeiro, and Charmaine Verhagen.[1]

The episode begins at Canterlot Castle, where ponies from all over Equestria have come together for the Grand Equestria Pony Summit. As part of the event, a large statue made of gemstones from each delegate's respective city will be honored. Twilight Sparkle, who organized the summit, briefly addresses the delegates and receives their applause. Despite Spike's willingness to help the delegates during their stay, they cheer for the princesses only.

Having been awake for three straight days organizing the summit, Twilight is too exhausted to see to her summit duties. While Twilight gets some rest, Princess Cadance charges Spike with making sure she isn't disturbed. Spike accepts the responsibility and keeps watch.

During his watch, Spike stops everyone and everything in Canterlot from making noise and possibly waking Twilight, including a chirping bird, a group of ponies' polo game, a landscaper from cutting down dragon sneeze trees, and a maintenance worker repairing a water main.

Later, two arguing delegates appear at Twilight's doorstep over a speech scheduling conflict, and they seek Twilight's advice. With Twilight too tired to handle the matter properly, Spike steps in to resolve the issue. The delegates are satisfied, but soon, more and more ponies show with various summit problems. Spike convinces the delegates that he is acting on Princess Twilight's behalf and addresses their problems one by one.

After the line of delegates has dispersed, Spike decides to take care of more of Twilight's summit tasks so she won't have to worry about them when she wakes up.

As self-designated "Princess Spike," Spike completes more tasks on Twilight's behalf, but Cadance warns him not to let the power go to his head. Though Spike assures that he's acting solely for Twilight's benefit, he soon takes advantage of the perks that come with using her name, like getting massages at the spa, having portraits of himself made, and extorting treats.

When Cadance confronts Spike about his abuse of authority in the main summit hall, Spike tells her that he's solved multiple delegation issues and everything is fine. Just then, a ball from the relocated polo game knocks over a row of dragon sneeze trees and bursts the cracked water main, flooding the summit hall with water. Cadance manages to shut off the water main, but Spike has an allergic reaction to the dragon sneeze petals, and his sneeze destroys the gemstone statue.

An angry mob of ponies enters, and Fancy Pants wonders about all the terrible decisions that Princess Twilight supposedly approved of. Before Spike has a chance to explain, they storm up the tower that Twilight's resting in. Spike barely manages to beat them there and locks himself inside Twilight's room. At that moment, a well-rested Twilight finally awakens, and Fancy Pants' angry mob enters to complain.

In the summit hall, Twilight sees the result of Spike's decisions, and he admits to having enjoyed being a princess and other ponies caring about his opinions. At Twilight and Cadance's encouragement, Spike apologizes to the summit delegates for taking what should have been a celebration of ponies coming together and making it all about himself. As repentance for his actions, he tries to reassemble the gemstone statue. The delegates are moved by Spike's words, and they pitch in to fix the statue and restore the summit hall.

Cadance dedicates the rebuilt statue to every city it represents, and one of the delegates gives Spike a bouquet of dragon sneeze flowers. Much to the others' alarm, Spike has another allergic reaction, and the episode cuts to black before he destroys the statue a second time.

Twilight Sparkle: And now my faithful assistant Spike would like to say a few words.
Spike: Um, hello, everypony! I'm here to help any way I can. So if there's anything I can do for any of you—
Delegate 1: We love you, Princess Twilight!
Delegate 2: We love all the princesses!
[crowd cheering]
Spike: [sighs] I guess everypony loves a princess. Hmph.

Spike: Two delegates have speeches booked in the same hall. What do I do?
Twilight Sparkle: Okay, no problem. Just put the hay in the apple and eat the candle, hm?

Fluffy Clouds: I was really looking forward to the "Don't Spend All Your Bits" Speech, but when I went into the hall, [tearing up] a pony had taken my seat. A pony who used to be my friend!
Spike: Your friend took your seat? Hah, big deal! Why don't you just—
Fluffy Clouds: No offense, but I don't need some random dragon's opinion. I-I want to hear what Princess Twilight thinks.

"Frazzle Rock": [lisping] Um, well, I'd rather, um, tell the princess directly.
Spike: Well, if it helps, you can call me "Princess Spike".

Spike: I'm sorry, Twilight. I guess I got a little carried away. It-it just felt so good to have ponies caring about my opinions on such important matters. I guess I was just enjoying feeling like a princess.
Twilight Sparkle: Well, Spike, one of the most important things a princess can do is realize when she's made a mistake and fix it.

Spike: [sighs] Uh, hi there, everypony. So I guess I owe you all a pretty big apology. It's funny. Here we are at a summit that brings together ponies from all across Equestria, and all I could think about was myself. You all came here to celebrate the things that make each of our cities so unique and special. But instead of getting into the spirit of things like all of you, I used my friend's position to make myself feel good.

Spike: Does this mean you forgive me?
"Joe Pescolt": Sure! You know, the whole idea of the statue is that when each of us plays our own small part, it adds up to somethin' great.
Fancy Pants: Quite. Just like how all our cities make up the beautiful land of Equestria!
Princess Cadance: I hereby dedicate the Citizens of Equestria statue to everypony who plays their part, no matter how big or how small! 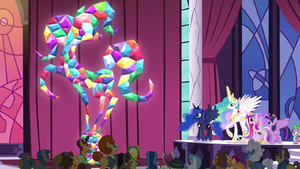