For the character, see Twilight Sparkle.

Princess Twilight Sparkle - Part 2 is the second episode of the fourth season of My Little Pony Friendship is Magic and the sixty-seventh episode overall. It is the second half of a two-part episode which aired on the same day as the first half.

In this episode, Twilight Sparkle discovers the origin of the Elements of Harmony, and she and her friends seek out the cause of the Everfree Forest's invasion.

The script for this episode was locked in August 2012.[3]

Initially the cragadile was going to be called a rockadile, but it was already trademarked.[4]

The scene when Discord welcomes the Mane Six back from their mission reappears in Memnagerie.

A glimpse into the past

After a short recap of Part 1, the episode continues with Nightmare Moon's menacing, echoing laughter, and she begins destroying the throne room with her magic. As Twilight Sparkle dives out of the way of falling debris, Princess Celestia enters to survey the damage. Twilight comes between Celestia and Nightmare Moon, addressing her as "Luna" and telling her to stop before she is banished to the moon again. Celestia, not even acknowledging Twilight's presence, tells Nightmare Moon to lower the moon, as is her duty. Nightmare Moon proclaims that her only duty now is to destroy her sister Celestia.

Nightmare Moon attacks and chases Celestia into the sky, prompting Twilight to follow. After several moments of dodging Nightmare Moon's magic, Celestia is hit squarely in the chest. Screaming, she plummets to the throne room floor. As Nightmare Moon cackles above, Twilight cries over the fallen Celestia and wonders why Princess Luna would do such a thing, not realizing she is in the past. As Twilight sobs, Celestia recovers and gets back up (to Twilight's great relief). Still not acknowledging Twilight's presence, Celestia raises the Elements of Harmony as they appeared in the past, up from underneath the floor. Twilight realizes that what she is witnessing is the night in which Princess Luna was first banished.

Princess Celestia levitates the Elements, and they form a ring around her. Flying back up, she hovers across from Nightmare Moon. With tears streaming from her eyes, Celestia blasts Nightmare Moon with the Elements of Harmony. Nightmare Moon fires back with her own magic, but the Elements and Celestia's magic combined prove far more powerful; she is engulfed in a rainbow of light and blasted to the moon, creating the Mare in the Moon's image on the moon's surface.

The Tree of Harmony

The magic of Zecora's potion wears off, and the light from Twilight's eyes fades, bringing her back to present day Ponyville. She wonders why her friends are all staring at her, and they tell her that she was mumbling to herself and crying, which Discord found amusing. Rainbow Dash asks if Twilight knows who's responsible for the Everfree Forest's invasion, but Twilight has no answer. Zecora believes the answer lies further in the past and suggests another sip of the potion. Twilight does just that, and Discord stands ready with a video camera and tripod.

Light fills Twilight's eyes again, and she has another flashback, this time to Discord's first reign of chaos. Discord sits in his self-made throne as Princesses Celestia and Luna approach. As Discord helps himself to what appear to be seeds and scatters them all around him, Celestia and Luna ready the Elements of Harmony. Discord sits curious as to what they're up to, and the princesses harness the magic of the Elements; Discord can only laugh all the way up to his imprisonment in stone.

The flashback suddenly takes Twilight even further into the past, and she finds herself deep within the Everfree Forest before a tree made of crystal. Twilight sees Celestia and Luna approach the tree, referring to it as the Tree of Harmony. Twilight sees Celestia's, Luna's, and her own cutie mark in the tree's trunk.

Luna is unsure about what they're about to do, but Celestia states that the Elements are the only means of defeating Discord and freeing Equestria. She goes on to say that the Tree of Harmony possesses a powerful magic even without the Elements, and as long as that magic remains, it will continue to control and contain all that grows in the forest.

The flashback ends, and Twilight believes that the Everfree Forest is growing out of control because the Tree of Harmony is in danger. Resolving to save the tree, Twilight and her friends set forth into the forest.

As Twilight attempts to cross a bubbly creek, she accidentally disturbs a sleeping cragadile. The angry beast advances on Twilight, who's unable to fly away. Twilight's friends restrain the cragadile with black vines, and Twilight berates herself for her helplessness.

With no clue as to what will come after them next, Applejack proposes that Twilight returns to Ponyville while the rest of them search for the Tree of Harmony. Twilight objects to such a suggestion, but her friends explain that, with Celestia and Luna gone, Equestria can't afford losing another princess, as there's no guarantee that Celestia and Luna will return when the Tree of Harmony is saved. Her friends all in agreement, Twilight pitifully makes her way back to Ponyville, and Spike follows her.

Discord is seen enjoying the chaos that the Everfree Forest is causing and using Gummy as a nail file, up until Twilight arrives to scold him. He asks about the Tree of Harmony, and Twilight tells of her friends' decision to have her stay behind. Discord is surprised that Twilight agreed to such a plan, accusing her of keeping herself out of harm's way while her friends rush headlong into danger. The draconequus' words get to Twilight, and she races back to help her friends in the forest.

The bonds of friendship

Meanwhile, Twilight's friends have yet to find the Tree of Harmony, and Rainbow Dash thinks their search is a lost cause. As she starts to question whether the tree is real or not, they find a cave at the bottom of a ravine from which bright light and a tangle of black vines emanate.

Twilight and Spike find themselves lost in the forest. Spike climbs to the top of a tree and spots their friends in the distance. When he alerts Twilight, he sees her surrounded by gas-spewing plants.

The others find the Tree of Harmony completely wrapped in thorny vines; Fluttershy believes the tree is dying. They try to rid the tree of the vines, but the vines fight back. The friends try to come up with a solution, during which Applejack and Rainbow Dash get into an argument about sending Twilight away, when Spike arrives, alerting them to the danger Twilight's in.

"Listen here, you rabid rhododendrons! You mess with one of us, you mess with all of us!"
— Applejack

Twilight's friends rescue her from the gaseous plants, and Rarity remarks that they're simply lost without her. The friends meet in the middle for a group hug.

Giving up the Elements

Returning to the Tree of Harmony, Twilight's attempts to get close to it are hindered by the black vines. She remembers Princess Celestia's words about the tree's magic and reaches the conclusion that saving the tree means giving it the Elements of Harmony. Her friends are naturally uncertain, as they won't be able to protect Equestria or turn Discord back to stone if he gets out of their control. Applejack says the Elements keep the six of them connected, but Twilight corrects her: the Elements brought them together, but their friendship will keep them connected.

With everyone in agreement, Twilight takes the jewels from her friends' necklaces and her crown and gives them to the Tree of Harmony. The resulting surge of magic disintegrates the black vines, and the tree shines bright. The last few vines disintegrate, freeing Princess Celestia and Princess Luna. Twilight runs up and hugs them. Celestia then commends Twilight's courage in giving up the Elements of Harmony.

Suddenly, the magic of the Tree of Harmony causes a flower to sprout at its roots. The flower blooms to reveal a box with six locks, requiring six keys to open. Celestia states she doesn't know where the keys are, but it's a mystery Twilight won't be solving alone.

As Twilight and her friends emerge from the forest, Discord appears to congratulate them. When he asks about the Elements, they inform him that they're gone. Discord is quick to ponder the possibilities of this, but Fluttershy swiftly warns him to control himself if he wants to remain friends. Applejack wonders why this all happened to begin with, and Discord mentions out loud that the seeds he planted should've sprouted long ago. Twilight asks him what he means, and he gives her Zecora's potion. She drinks it and views the past one more time.

Prior to his original imprisonment, Discord had planted his "plunderseeds" to steal the Tree of Harmony's magic and capture the princesses, but it was only until now that the tree had enough magic to keep the seeds from growing. Twilight berates Discord for withholding this information, but Discord explains it was to teach Twilight a valuable lesson about being a princess.

At the Summer Sun Celebration, Princess Luna lowers the moon and Princess Celestia raises the sun. At her cue, Princess Twilight (wearing a new crown) takes flight and produces a sonic rainboom-like effect with her magic in the shape of her cutie mark. Afterward, everyone smiles for Princess Twilight, even her.

Twilight Sparkle: Why are you all looking at me like that?
Applejack: It's just... you were mumblin' to yourself...
Pinkie Pie: Ooh! And don't forget the uncontrollable sobbing!
Fluttershy: We were really worried about you.
Discord: I for one found it delightful. Sort of a one-pony theater piece, if you will. You should really consider taking it on the road.

Discord: Oh, I do hope she breaks into a song this time!

Twilight Sparkle: But the Tree of Harmony! I'm the only one who has seen it and knows what it looks like.
Rainbow Dash: Huge tree, cutie marks on the trunk, probably being attacked by something hideously awful? Yeah, I'm pretty sure we'll know it when we see it.

Applejack: I sure am glad you came looking for us.
Twilight Sparkle: Not as glad as I am that you found me.
Rarity: The truth of it is, Twilight, we're simply lost without you.
Rainbow Dash: Yeah. Equestria may need its princess...
Fluttershy: But we need our friend.

Twilight Sparkle: My new role in Equestria may mean I have to take on new responsibilities, and our friendships may be tested, but it will never, ever be broken.

Discord: Where are those little trinkets of yours? You know, the ones you use to send me back to my extremely uncomfortable stone prison?
Applejack: [sigh] Gone.
Discord: Gone? Gone?
Fluttershy: But our friendship remains. And if you want to remain friends, you'll stop thinking whatever it is you're thinking and help us clean up.
Discord: Fine. But I don't do windows.

Twilight Sparkle: You realize this is information we could have used hours ago?!
Discord: And rob you of a valuable lesson about being princess? What kind of friend do you think I am? 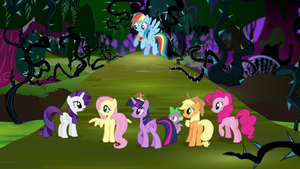